june 26, 2018, 11:58
Culture
Authors: Zane Brikmane (LTV kultūras žurnāliste)
The so-called United Buddy Bears, exporting friendliness and optimism, will travel to Latvia where they will be on show at the Dome Square in Old Rīga starting July 12, reports LTV.

A total 149 bears, symbolizing UN countries, will arrive as Germany's gift on Latvia's centenary. The installation will collect donations for sick children whose healthcare isn't paid for by the state.

Later in the year, the Buddy Bears' first Baltic visit will be supplemented by performances of German artists.

One of the arriving bears, an individual of two-meter height, is permanently stationed at a Rīga school, decorated with landscapes of Mazirbe, western Latvia. It was decorated by the artist Aleksejs Naumovs.

"I'm glad that the colors haven't faded and that no one has painted anything else on the bear," the artist says. "When I visited, there were five children hugging it. It was very heartfelt and cool," Naumovs says.

"On a birthday, you usually get gifts. But when it's a big and round birthday, the gift is special," explains Germany's ambassador to Latvia Rolf Schütte.

"Of course, this year there are many concerts with famous German orchestras. But what would be a gift that's accessible to anyone? This is how we got to the idea -- you can visit the bears for free, day and night... I've been working at the Foreign Office for 37 years, and it's the largest project I've ever been involved in."

The bears will help collect donations for healthcare, in cooperation with the Children's Hospital Fund. The money will go to children whose healthcare isn't paid for by the state.

"Last year the Children's Hospital Fund used about €500,000 to this end, and this means the need is very big. We used it to treat children with oncological diseases, aggravated allergies, as well as heart problems." 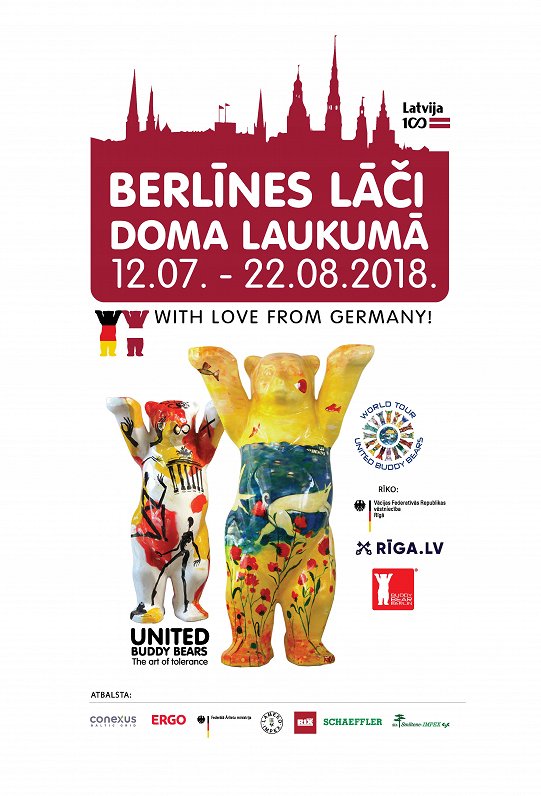 There'll be music as well. In the fall, Leipzig's Gaeandhaus orchestra will hold two concerts in Rīga and one in Liepāja under the direction of its new conductor Andris Nelsons and soloist Kristīne Opolais, the German ambassador said.

While another special event will be the visit of Berlin's Koncerthaus on September 28. It will perform at the Great Guild Hall in Rīga, together with organist Iveta Apkalna.

If you are in the mood for more Germans-in-Rīga action, make sure you check out a new app from the Goethe Institut, which allows you to follow in the footsteps of Wagner, Herder and other famous Germans who once made Rīga their home.