june 27, 2018, 12:07
Culture
Authors: Māra Rozenberga (Latvijas Radio Ziņu dienesta korespondente)
Clever Estonians from Haanja, near the towering (318 meters above sea) Munamägi peak not far from the Latvian border, have made their way into the Latvian Song and Dance Festival. They achieved this in a large-scale covert operation, infiltrating the Veclaicene folk dance collective through the local cultural center.

As a result, dancers from Estonia will be performing as the Korneti collective representing the cultural center of Latvia's Veclaicene parish.

Latvian Radio's Māra Rozenberga learned the nuts and bolts of the scheme on a workday evening at a rural home by the Haanja village in Estonia. Locals were busy cooking sausages and working the dark wooden sauna.

The perpetrators - doubling as members of a local dance collective in addition to doing subversive activities on the side - were expecting guests. Among them were Latvian journalists amused by the cunning with which the Estonians showed themselves in as performers at the Latvian celebration.

Local Aigar Tuusis is one of the people who authored this plan. In addition to working as a welder, he has been dancing at the local collective for more than 20 years. His collective established friendly ties with the Latvians living by the border long ago. 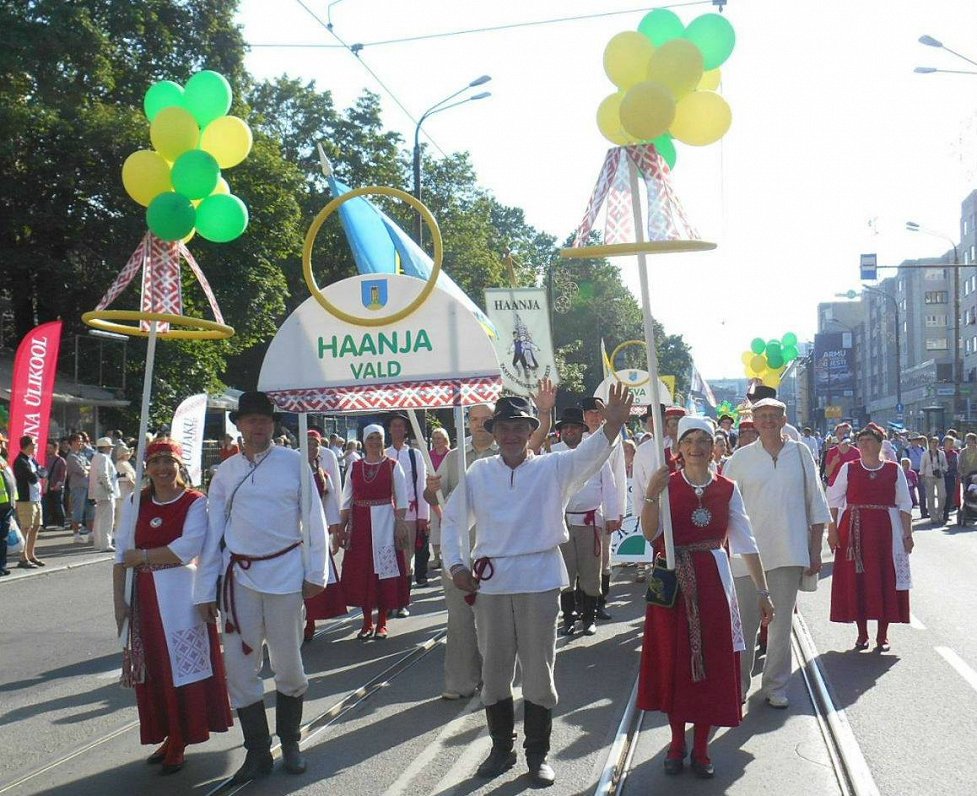 Aigar claims the thing started as a joke. Following the previous Estonian dance celebration, they started deliberating – we've been to the Estonian and Finnish festival, why not try to get into the Latvian as well?

"We've been to different festivals in Estonia and elsewhere in the world. But this challenge seemed new and almost impossible," said Sulev Kraam, the head of the local dance society

"Ulvi, the leader of our collective, said that even if we won't make it into the Latvian celebration, at least we'll have eight men with straight backs," said Aigar.

"Well, your thumbs get quite tired from doing Latvian dances!" said Aigars. Sulves disagreed, however. "You have to keep your toes straight and raise your knees higher. And you have to have your back straight!"

Korneti will perform as a senior group at the upcoming Song and Dance Festival. The demands are more lax for senior dancers. They also hope they won't have any trouble understanding directions at the Daugava Stadium -- but they have the experience and can always ask their neighbors for help.

Veclaicene's Jānis Prangelis, an old-time acquaintance of the dancers, will accompany the Estonians to Rīga. He also helped with the translations for Latvian Radio in Haanja.

"I think it's a super bold idea. It's marvelous. I'd really like it if they would do as promised and perform as the Latvian dance collective Korneti at next year's Estonian festival. That would really suit their style!" said Prangelis.

But Prangelis was not the main co-conspirator on the Latvian side. This honor goes to Maija Rozīte, the head of the Veclaicene folk house. Latvian Radio met her at Korneti, just a few kilometers away from the Estonian border.

Seeing as the tiny Veclaicene parish, with a population of 300, did not have its own collective and choir, they allowed Estonians to use the local culture center. She said that borders between the countries aren't really felt here, right by the border.

"They have always supported me as guests. They've danced in Alūksne and Veclaicene. They're superb people!" said Rozīte.

"We had a joint dance here at Veclaicene and they said that they want to go to Rīga. I told them I'd look into the possibility. I then called Sanita Eglīte, the head of the Culture Department at the Alūksne Municipality. I asked her if the Haanja dance collective could partake in the Latvian dance festival. She called the Rīga headquarters and told me that they can't. They could only go on a procession and dance in the street concerts. But this wasn't enough for them!"

Nevertheless the Estonians were not discouraged. They enlisted the help of Einārs Trapcāns, the leader of the Jaunalūksne dance collective Kolberģis. Together with Ulvi, the aforementioned head of the Estonian dance collective, they undertook the challenge of leading the Estonian dancers to the festival. Having arranged a place to practice in Latvia, they went to work. The Alūksne Municipality helped them acquire authentic folk costumes.

"They learned the dances and partook in the general review of dance collectives," recalls Rozīte. "I was incredibly stressed out. I was afraid that the commission... would catch on that they're Estonians... It took some nerve. But when they passed the exam, I thought we must do everything we can to make the name of Veclaicene resound during the song festival! Everyone supported us, including the Culture Department of the Municipality."

"The local municipality was in the know. We only hoped that the Rīgans don't learn about this, so that they don't hiss us off the stage!"

The chief organizer of the festival, Inga Vasiļjeva commented the amusing scheme with a wry smile:

"They've mastered the repertoire. They went through the screening...and tailored their folk costumes... We really want them to show up!"

The news over the Estonian collective assuming the guise of a Latvian dance collective was first broken by Madis Must, a journalist at the Maaleht newspaper.

"They were quite nonchalant about their achievement," said Must.

"I guess they didn't think they'd be the first foreigners to partake in the dance festival. This they didn't know. But one of the dancers mentioned this to one of my colleagues, also a dancer. When we talked to them and learned the details, it turned out to be a really heartwarming story. Because they have the Latvian folk costumes."

"Performing at the Latvian festival seemed like an adventure tothem. It's not really difficult to get into the Estonian one, and they had been successful in the past. But this -- this was something special!" he said.

According to the organizers of the 2019 Estonian Song and Dance Celebration, there won't be any foreign dance collectives participating at the Estonian festival. That is, if Latvian dancers don't decide to go undercover in Estonia.

After some fringe warm-up events, the XXVI Latvian Song and XVI Dance Celebration will open on 1 July 2018 with the traditional sacred music concert at the Riga Cathedral, followed by the Celebration Procession throughout the streets of Riga.

500,000 celebration-goers (equivalent to roughly 25% of the Latvian population) will be able to attend events, most of which are free of charge.