june 17, 11:27
Culture
Authors: eng.lsm.lv (Latvian Public Broadcasting)
Latvia spends more of its budget on culture than any other European Union nation according to figures released from Eurostat on June 16. 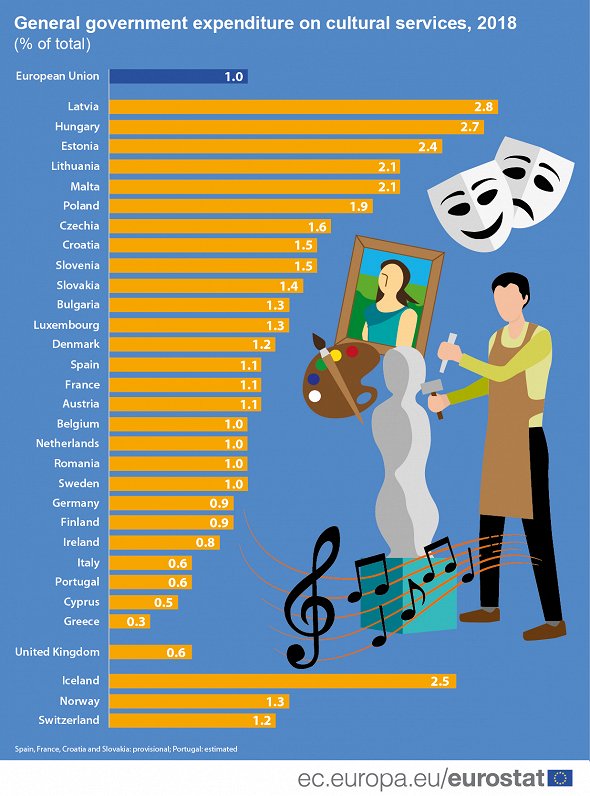 However, there are considerable differences between the EU Member States. In 2018, Latvia recorded the largest share of cultural services in the general government expenditure (2.8%), followed by Hungary (2.7%) and Estonia (2.4%). The lowest share was recorded in Greece (0.3%), with the shares in Cyprus (0.5%), Italy and Portugal (both 0.6%) slightly higher.

There were generally relatively small changes reported in a majority of the EU Member States between 2013 and 2018. The main exception was Hungary, where the share of cultural services in general government expenditure increased from 1.5% to 2.7%.

Notable increases were reported also in Malta, Lithuania (from 1.6 % to 2.1 % in both countries) and Poland (from 1.5 % to 1.9 %). The largest percentage decrease in public expenditure on cultural services during the analysed period was recorded in Estonia (from 2.8 % to 2.4 %), likely reflecting the increased cultural spending from all three Baltic states as part of centenary celebrations.

However, while spending on culture is high, spending on broadcasting and publishing is comparatively small, as the graph below shows.