Three facts about the Bolsheviks' rush towards power

After the October Revolution, the Bolsheviks on November 9-21, 1917 took over unoccupied Latvia (Vidzeme and Latgale). The bid for power was lead by the Military Revolutionary Committee and carried out by Latvian Riflemen - originally a military formation of the Russian Empire assembled to defend the Baltics. On November 9 they took Cēsis and on November 21 they took Valka, both in what's now northeastern Latvia.

What you need to know about the Bolsheviks' rush towards power

On November 9 the 1st Daugavgrīva Latvian Riflemen Regiment and the 3rd Kurzeme Regiment marched into Cēsis. They were following the orders of the Revolutionary Committee of the 12th Army. Well-armed riflemen set up posts at key points of the city, like the railroad station, the post, and the telegraph. They arrived in Cēsis just in time for when the Soviet Congress of the 12th Army took place.

The Congress consisted mainly of delegates who were unfavorably disposed towards the Bolsheviks. However it decided not to condemn the revolution.

This meant that one of the main obstacles for taking over Vidzeme was quickly removed.

2. The meeting that did not take place 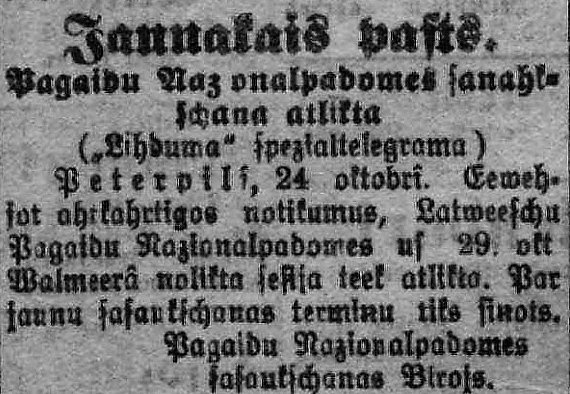 A meeting where the Latvian Provisional National Council should have been set up was scheduled for November 1 in Valmiera.

After they had lost Riga and the Bolsheviks proved successful at the Vidzeme Land council election, the political forces of Latvian nationalists decided to set up an organization that could represent the whole Latvian nation.

The Latvian Provisional National Council should have become a such-like political center that would unite Latvian political parties and public organizations. However the Bolshevik revolution forced them to delay the foundation by three weeks and call a meeting in Valka not Valmiera.

3. Committee for the Salvation of the Motherland and Revolution 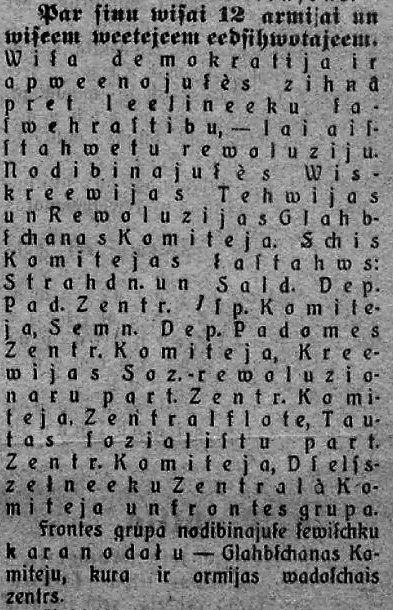 After the Bolshevik coup their main opponents formed the Committee for the Salvation of the Motherland and Revolution.

A department of this committee was set up at the area of the 12th Army in Valka. It had many Latvian political and public activists from the Latvian Farmers' Union, the Socialist Revolutionary Party, the National Union of Latvian Soldiers and other parties and organizations.

The committee said the revolution should be saved from the Bolshevik coup and that the Bolsheviks' victory would mean a civil war would erupt in Russia.

Why are these facts important?

When they took over Vidzeme, Bolsheviks' main support were the Latvian Riflemen.

It could be said that the myth of the Red Riflemen started here, giving birth to the legend of the Latvian Riflemen as trusted guards of Vladimir Lenin, the 'Praetorian Guard' of the Bolsheviks and avid revolutionaries.

Under Soviet occupation, the authorities were busy stressing that the Riflemen were in fact 'red', or supporting communism. Of course there is some truth to any myth, and there were Bolsheviks among the Riflemen. However in fact there were always very few of them: in late 1917, no more than 5% of the Latvian Riflemen were also Bolsheviks.

But why, then, did the riflemen support the Bolsheviks?

Looking back at the time from today's perspective, it's clear that most riflemen were neutral or expectant against the Bolsheviks. Some were close to loathing them, especially the officers, who left riflemen battalions en mass after the revolution, followed by many regular soldiers too. Within a few months the ranks of riflemen shrank by half and had almost no officers with combat experience left. Many of them joined the National Union of Latvian Soldiers or the anti-Bolshevik movement in Russia. 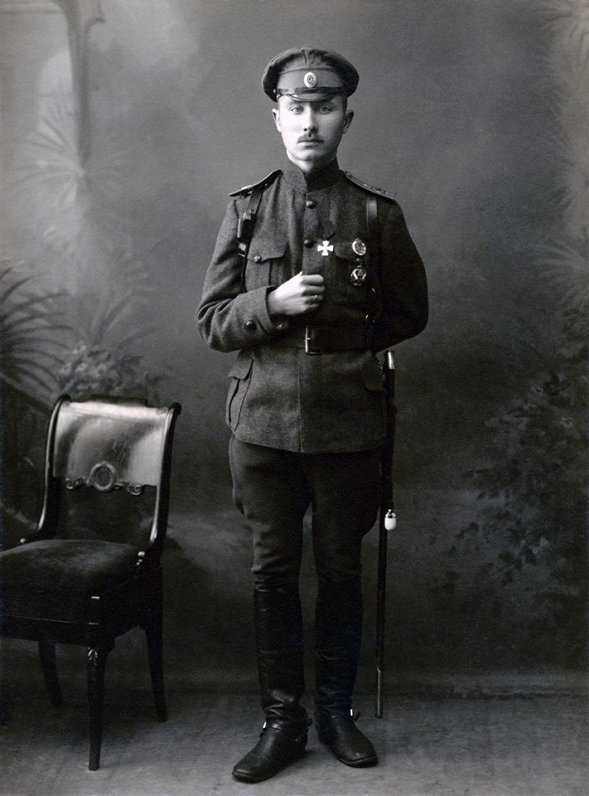 One of the most vivid examples was the fate of the legendary commander Frīdrihs Briedis.

Colonel Frīdrihs Briedis (1888 - 1918) was one of the most courageous and successful Latvian military men during the First World War. He was one of the first high-ranking officers to join the Latvian Riflemen battalions. Soon after coming under his leadership, his troops made several very successful attacks against the Germans. He worked out tactical solutions for overcoming the enemy's fortifications. Briedis' military career advanced swiftly, and he was repeatedly wounded in battle.

During the coup Briedis was on leave to heal his arm, wounded in combat. During his absence the 1st Daugavgrīva Latvian Riflemen Regiment, after pressure from the Bolsheviks, elected a new commander to take his place.

Officers protested and the vote was very narrow, but Briedis was unable to return to his regiment. Many officers and regular riflemen left its ranks. Later the head of the regiment committee came across Briedis in Valka and arrested him, but Briedis managed to flee.

He was active in the National Democrat party and cooperated with the National Union of Latvian Soldiers, the Latvian Provisional Council and the anti-Bolshevik movement.

In summer 1918 he was arrested by the Cheka and shot.