june 28, 10:20
History
Authors: eng.lsm.lv (Latvian Public Broadcasting)
The famous castle in the town of Cēsis in central Latvia is a well-trodden site for tourists and archaeologists alike, but a new discovery shows it still has a few secrets and surprises within its ancient walls.

A unique inscription from the second half of the 16th century has been found on a stone in the South Tower of Cēsis Castle during an inspection of a winding staircase which had been inaccessible for centuries. This is the oldest, culturally and historically most significant inscription in stone to have survived at Cēsis Castle. The text, written in Latin and German, has already been partially deciphered.

Last week, in the evening light which streamed through a loophole, Gundars Kalniņš, head of the Medieval Castle Department at Cēsis Museum, noticed a previously unknown inscription on a stone – a meticulously engraved coat of arms. The initials WKVA are carved around it and can also be seen in the middle part of the stone. A house mark sits in the centre of the coat of arms. In the Middle Ages, town dwellers used these rune-like symbols as a kind of coat of arms. An owner marked his valuable possessions with the house mark and used it as a signature and stamp. The decorative shape of the shield is characteristic of the second half of the 16th century. 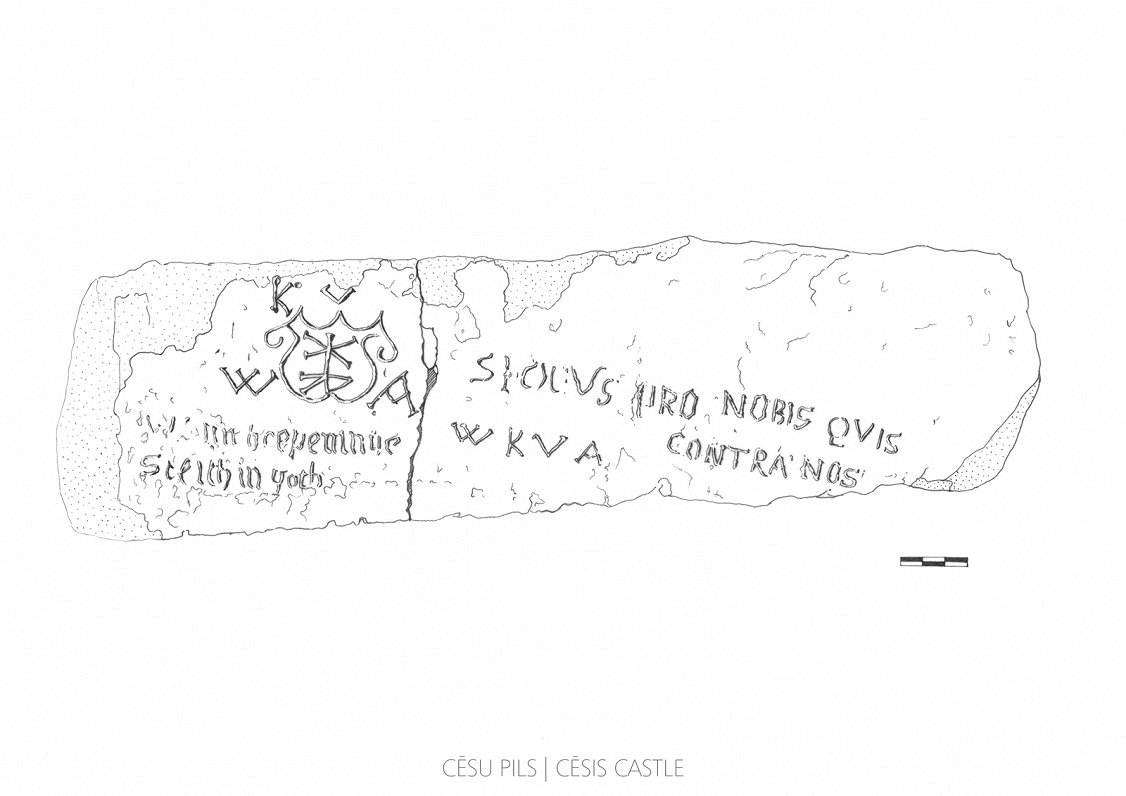 Next to the shield, the stonework revealed some lines of text having faded over the years. However, the slanted text in Latin on the right side of the stone was easily readable – “Si Deus pro nobis quis contra nos” i.e. “If God is for us, who can be against us”. It is the question the apostle Paul asked in his letter to the Romans. The text in German, situated below the coat of arms, is difficult to read and will have to be deciphered during further research.

Now only visible under particular lighting conditions, the text would have been much more obvious at the time of its inscription. As with the rest of the tower’s inner walls, the engraved stone was once coated in limewash. There was enough contrast between the white finish and the areas where the dolomite stone has been engraved to be able to read the wording in the shadowy rooms of the tower.

Close examination of the inscription revealed that a pointed iron tool was used to engrave the dolomite stone. It seems that the author used a knife although the hard stone would have blunted the sharp tip.

According to Kalniņš, the content of writing suggests that the inscription may have been made during the siege of Cēsis Castle. After 300 years of peace, the castle experienced its first siege in 1577. This episode of the Livonian War has gone down in history as one of the most tragic events in 16th century Europe. For five days the Russian heavy artillery battered the castle walls until the besieged garrison -- incuding many ordinary townsfolk -- blew themselves up, unwilling to succumb to Tsar Ivan the Terrible. Many hundreds of Livonians died in the tragedy.

It is only since last year that researchers have been able to access the South Tower of Cēsis Castle at all levels. Then, the tower’s ceilings and winding stairs were restored. Referred to as 'Tall Hermann', (a name also used by a famous medieval tower in Tallinn) the tower is an excellent example of medieval military architecture. It is soon to be opened to the public.