august 8, 2019, 12:00
History
Authors: Māra Rozenberga (Latvijas Radio Ziņu dienesta korespondente)
The once elegant and popular resort of Ķemeri is hoping to return to something approaching its former glory with restoration work commencing on an historic water tower tower in the center of the now run-down spa resort.

The much-anticipated reopening of the "white liner" - the magnificent building of the former Ķemeri sanatorium has yet to happen after years of legal wrangles regarding its ownership, and is now styled the "Park Hotel Ķemeri" though it has yet to welcome a single guest.

But now Jūrmala municipality has seized the initiative. The water tower restoration is intended as just the first step in a restoration of the extensive park surrounding it.

The healing properties of Ķemeri's mud and sulfur-rich mineral waters have attracted an elegant set of people seeking healing here since the 19th century. A 20-hectare park was created, in the mid-1930s, around the the sanatorium designed by master architect Eižens Laube.

However, the sanatorium park, which belongs to Jūrmala municipality, is in a sad state. During the Soviet times, asphalted paths crumbled or disappeared completely, iron railings rusted, and the Rotunda on its artificial island has stood as a sad testament to the ravages of time and neglect.

But the 90-year-old water tower next to the "white liner" of the sanatorium, designed in the style of a lighthouse, could illuminate a brighter future. A fence has been erected around it and renovation works are commencing.

The reconstruction of the tower will cost just over 1 million euros, with 7 million euros earmarked for other projects in the Gulf of Rīga area as part of a wider investment in tourist infrastructure. There is a detailed vision for Ķemeri dating back to 2014 that aims to bring the resort back to life (the document also contains many extremely evocative pictures from the past).

“Restoration of Kemeri Water Tower is based on it being an architectural monument of national importance," says Baiba Birzniece, a spokeswoman for Jūrmala City Council. A viewing platform will be provided and a tourist information center and small exhibition space will be located within the building, as well as restoring its original function as a water tower. A parking lot will be created and the nearby road intersection will be rebuilt.

It is hoped that the first visitors can be welcomed next summer, though that will require contractors ReRe to work through the winter months.

“Yes, it creates additional difficulties. But the works are planned in such a way that during the winter the work is done that is can be performed when temperatures are below zero... but the work will be completed in the spring of next year or early summer,” says Edvīns Koncevičs of construction company ReRe, adding that the subsequent restoration of the park will likely provide an even bigger challenge. 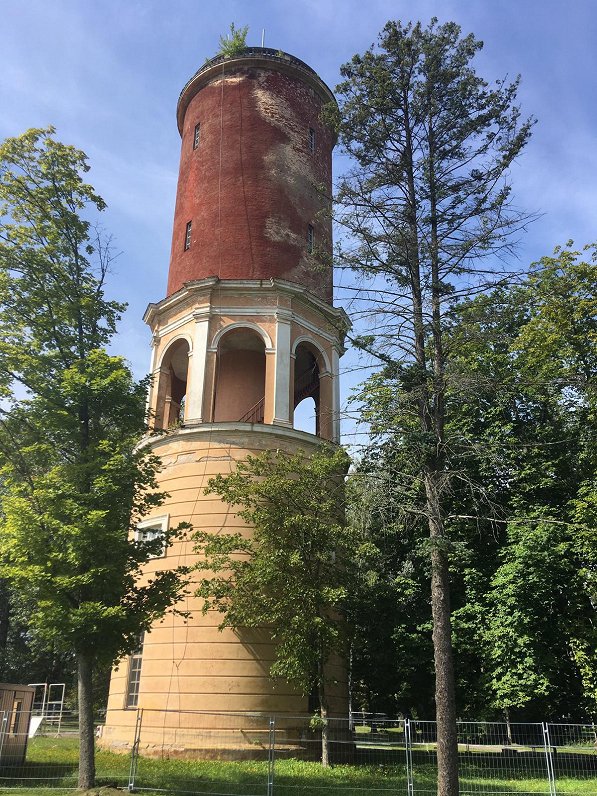 Sadly though, the future of the astonishing "white liner" remains as mysterious as ever. Opening dates for a new hotel in the building have repeatedly come and gone. A high fence and guard dogs prevent architecture fans getting too close to the alabaster exterior, an intoxicating mixture of art deco and art nouveau.

The project manager responsible for renovation works at the hotel was unavailable for comment to Latvian Radio, but the company said it was in talks with American hotel chain, Hyatt. The latest putative date for the hotel to open is 2021. Meanwhile the hotel website displays a video of people painting in the park while a singer promises to "Be there someday." The most recent news on the website dates from 2017.

Park Hotel Ķemeri also owns the nearby buildings of the former Kemeri Sanatorium Clinic. The owners say they plans to set up a spa there, however, the buildings are in an appalling state and are an eyesore in the heart of the resort. A serious fire in 2012 didn't help and, like the "white liner" they are surrounded by a high fence.

But this atmospheric and fascinating place does still have people who feel passionately about its future. Ieva Lazda, an activist of the Ķemeri Society, said in an interview with Latvian Radio that there has long been talk about restoring Ķemeri as a resort. The Society hopes that the planned renovation work will also encourage the improvement of streets and roads in Kemeri for local residents, who in turn are doing their best to get their own properties in order.

Once among the classiest resorts of the Baltic coast, it is to be hoped that Ķemeri can recover at least some of its former glory.

You can read more about the history of Ķemeri at the Latvia Travel website.