Share:
Ieteikt
Share
Tweet
june 19, 2019, 15:55
|
History
Authors: eng.lsm.lv (Latvian Public Broadcasting)
The story of Voldemārs Miervaldis, who served in the aviation regiment of the Latvian army, is part of a story series on Latvian Radio dedicated to the 100th anniversary of the Latvian Army.

Voldemārs Miervaldis was born in 1909 and in the late 30's served as an engineer in the aviation regiment of the Latvian National Armed Forces.

There are two pictures. In the first one, a group of aviation soldiers are putting together the airframe of a hydroplane. They are wearing parade suits, even though their customary attire was a thick leather jacket meant to ward off the cold wind. In the second, a squat, strongly-built man is bending over an engine of a similar hydroplane, on the side of which there can be seen an emblem – a shield with a ram's skull and twisted horns.

Historians put a lot of effort into identifying the emblem, and it turned out that the plane was a twin-engine “Heinkel 59” aircraft produced in Germany. Knowing that the photograph dates back to 1939, it was interesting to find out the fate of the aircraft and its pilot in a press report from that time. 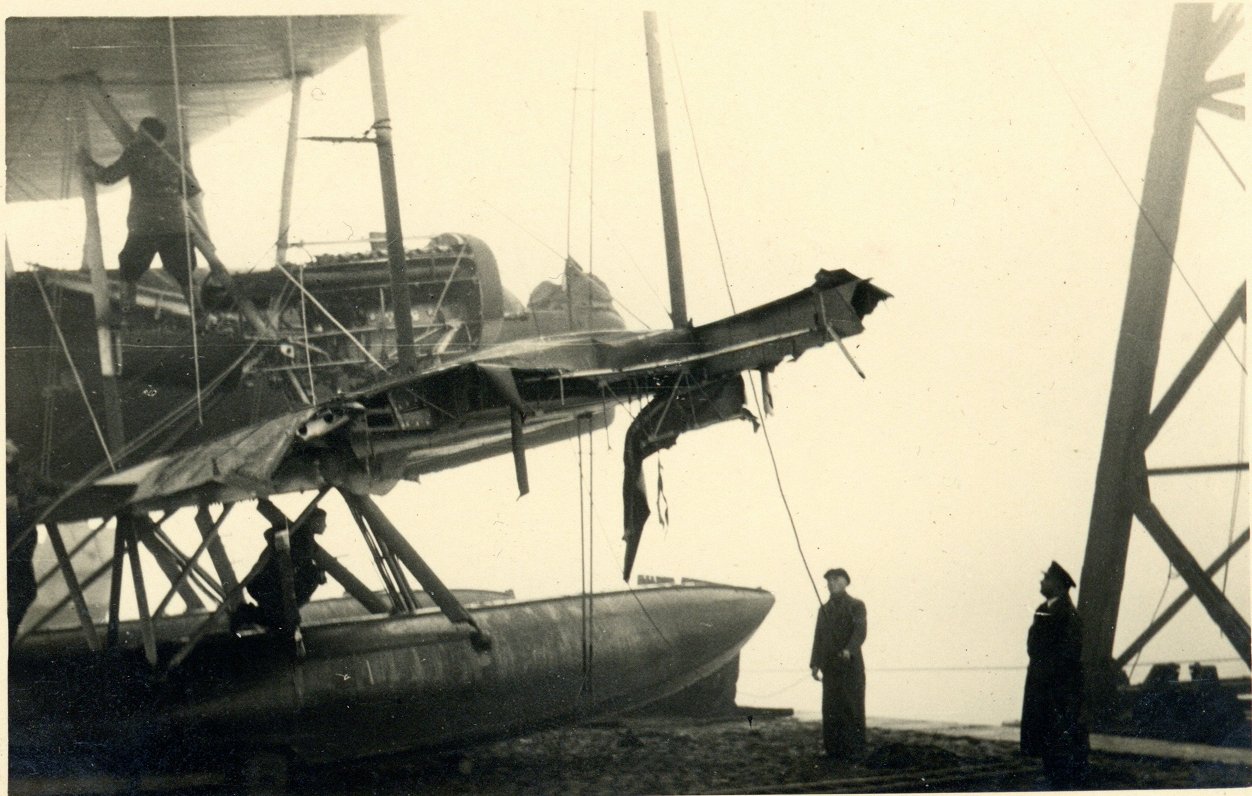 “November 9, Liepāja. A German seaplane crash-landed near the seashore quayside in Liepāja last night. After a distress signal resounded from the crash site, soldiers situated in Liepāja arrived at the location. The tugboat “Austra” from the Liepāja quayside provided assistance to the injured pilots. The aircraft was saved at the last moment, before the gales threatened to hurl it against the quay. At 4 in the morning, the aircraft was tugged into the Liepāja harbor and placed in the customs area. The Liepāja fishing boat “Alberts” rescued the crew. The aircraft was then taken over by the military and the crew interned,” wrote the Valdības Vēstnesis newspaper.

This means that the pilots were interrogated to discover the purposes of their presence in Latvian waters. What happened to these pilots afterwards is unknown, but it is likely that they were given over to Germans.

The fact that this moment was photographed at all is curious in the first place. In 1939, Liepāja was a Russian military base, and the taking of photographs was strictly prohibited, since both the Soviet Armed Forces and the Latvian army were situated there. So how did these pictures come about?

What we are seeing here is a real event virtually uncovered by the Latvian press. The Heinkel hydroplanes were used by the German army for spying purposes, and it is surmised by their placement that in Eastern Prussia, Pilava, where the German Armed Forces kept these aircrafts, they were indeed used for aerial photography and surveillance of the Baltic Sea and the Kurzeme Coast. It just so happened that one of these aircrafts were struck down by the storm.

Voldemārs Miervaldis passed away in 1985.

An unnamed family from Liepāja provided the information.