Latvia increasing its spending on sport and recreation

Share:
Ieteikt
Share
Tweet
september 23, 2019, 13:39
|
Sport
Latvia spends more than the European Union average on the provision of sport and recreation, when it is considered as a percentage of the government budget, according to Eurostat data released September 23 to mark the European Week of Sport (23-30 September).

0.8 per cent of general government spending was dedicated to sport and recreation in 2017, Eurostat said, putting Latvia on a par with Cyprus and Romania. The average spend across the EU was 0.7 per cent.

In 2017, the ratio of government recreation and sport expenditure to total expenditure varied across EU Member States from 0.2% of the total expenditure in Croatia, 0.4% in Ireland, Malta, Slovakia and the United Kingdom, to 1.2% in Luxembourg, 1.4% in Estonia and 2.5% in Hungary. 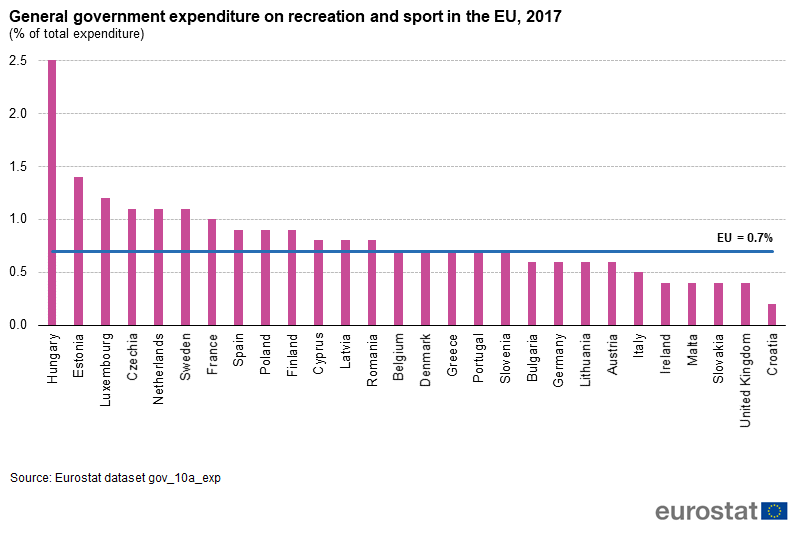 However, the actual amount spent by Latvia, as one of the smaller countries in the EU, is small on a per capita basis. Spending was 80.8 million euros in total, or around 42 euros per head of the population. The EU average is 100 euros per head.

Again it should be pointed out that the figures cover 2017 and the centenary year of 2018 is likely to see a jump in that amount. Indeed from 2016 to 2017 there was already a significant rise from 62.2 million euros. The amount has been steadily increasing since the austerity year of 2010 when when government spending on sport and recreation was 37.6 million euros - a bit more than half the current spend.

By contrast, spending on what is classed as Cultural Services in 2017 was a little over 300 million euros.