october 29, 2018, 9:14
Business
Authors: eng.lsm.lv (Latvian Public Broadcasting)
Blood is thicker than water: family-run firms often outperform those led by outside managers. That goes for Latvian businesses too, in this piece by Alexander Welscher originally published in Baltic Business Quarterly and reproduced by kind permission of AHK, the German-Baltic Chamber of Commerce in Estonia, Latvia and Lithuania.

The roles and responsibilities in Jānis Vinters’ family business are clearly defined: “I am more like a general manager leading from the top, while my brother is the executive director”, says the owner of Latvian farming company Z/S Līgo. 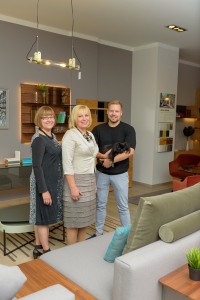 In 1993, Ritma Ritenberga and her business partner, Ingmārs Tēraudkalns, established their company, Ambergs, in Riga. The main idea was to sell furniture, fitted kitchens and plumbing imported from Germany to Latvia. Today they have more than 60 German partners with brands like Rolf Benz, Hülsta, Pogenpohl, Leicht and Eggersmann of which Ambergs is the exclusive representative in Latvia. The company sells equipment to designers, project developers and real estate agents. For Ritma, 1993 was a turning point – not only in her business but also in her personal life. She was a widowed chemistry teacher who wasn’t earning enough and so desperately needed a change. “When I decided to build my own company, the most important thing was that my two kids got a good education”, she says.

Laura Ritenberga-Kinder (35) and Rolands Ritenbergs (30), Ritma’s two children, started work in their mother’s company when they were 9 and 14 years old. “We used to go with my mother to trade shows to represent the company – it was normal for us, we just slipped naturally into the company life”, says Laura. Both kids could not imagine doing anything else. “Back in the day, my children learnt from me. Now, with all the new technology around, I actually learn from them”, adds Ritma.

As in every other relationship, there are ups and downs. “In a family business though, you have to deal with other family members, you can’t just walk away and get another job, it is another level of conflict management and cooperation”, Rolands says. What Ritma loves most about her company is that she always stays in touch with her children. “As Laura lives in Germany and does her work from there, I don’t get to see her very often, but due to the job we are in contact all the time. I experience both of my adult children more often as it would be in the case of not working together”, she says, smiling.

“My brother has a technical education and is very smart in mechanics. I can plan and develop the company from above, and I don't have to think about every small detail. My brother will take the right decision”, Vinters explained recently in an interview with Latvian magazine Ir Nauda.

Founded as far back as 1989, the family-run company with around 35 employees is engaged in grain cultivation, grows hybrid cucumber seedlings in greenhouses and produces biogas. Both Vinters brothers got involved with their father’s family farming business from the very start. And ever since they have found a way to work well together and to keep alive their commitment to the company. Each of them does his own duties; only decisions involving larger sums of money are always taken jointly.

The strong family bonds have proved to be extremely productive in business. 30 years after it was founded, Jānis Vinters today runs one of the most valuable agricultural companies operating in Latvia. His farms in the Lielplatone parish near Jelgava stretch over 2,000 hectares and – in 2016 – achieved the highest profitability among all producers of agricultural products in Latvia, according to the TOP 500 ranking compiled by the business newspaper Dienas Bizness.

In another ranking, the daily Latvijas Avīze put the equity capital of the sportsman-turned-businessman – he previously pursued a career as a rally motorcycle racer – at 8.3 million euros. This makes Vinters the richest farmer in Latvia.

Achieving success – but not fame

The rise of Z/S Līgo might be exceptional but is far from unique in the Baltics. Estonia, Latvia and Lithuania have seen many family business success stories over the past quarter of a century. Despite the prevalence of large corporations in many markets there are always some family-owned businesses that not many other companies can compete with in their particular niche.

Think of any field, and you’ll find a successful family business that has a competitive edge and is doing extraordinary things, whether it be in hospitality, food and beverage, agriculture or other sectors. Yet many of them tend to stay in the shadows and remain unknown, even though they play a major role in driving the national economy forward.

“Family-owned companies have always been an essential part of the economies of the Baltic countries and have proved to be successful and resilient. Even during Soviet times when there was no business and market economy, many people were producing various agricultural and forestry products”, says entrepreneurship researcher Aivars Timofejevs of the Stockholm School of Economics in Riga.

Back then, some very small micro-enterprises were tolerated in sectors such as agriculture and food processing.

In times of perestroika, the planned economy was opened up even more in an effort to make the agricultural sector more efficient and save the crumbling Soviet Union. Family farmers in Latvia in 1989 were allowed to obtain farmland and were given the right to start up independent farms. Jānis Vinters had just turned 18 back then. “I was the youngest farmer in Latvia”, he recalls. Initially, he was granted 15 hectares in a program that cancelled the existing restrictions on private property ownership.

After fully regaining independence in 1991, the reintroduction of the market economy in the Baltics provided the opportunity for many more new family-run enterprises to prosper in various fields. However, not all of them survived, due to several economic crises in the 1990s and the Baltic boom and bust cycle after the EU accession in 2004 that has only recently been fully overcome.

Nowadays, globalization and digitalization pose new challenges, but also contribute to the emergence of new family businesses – with modern social media accelerating the transformation of hobbies into businesses. And in the thriving start-up scene in the Baltics, family and friends often provide a key lifeline for entrepreneurs, whether it's financial, operational or emotional.

The family’s garage – this was where Nikolay Morozov (87) and his son Yury (57) built their first wooden table. In 1993, they established their company JNM which designs personalized furniture, made from any wood in the world. This initial name stood for Yury.Nikolay.Morozov and indicates the family approach that has been defining for the company’s approach since. They decided to change the name of the company to Morozov & Son when Yury’s son, Sergey Morozov (32), joined it. Celebrating its 25th birthday this year, Morozov & Son employs 50 people and is an internationally acclaimed brand.

“I have worked in many different places and I realized that nothing is better for me than working in our own company,” says Sergey. In the beginning, working together with his dad wasn’t always easy. “Parents expect more than a normal boss would – and it’s hard to convince your parents of your opinion. They just always think they are right”, admits Sergey Morozov with a grin. Meanwhile, both of them have found their place in the collaboration. “I am really proud that my son joined our company,” says Jury.

All three generations emphasize the importance of the company’s values: trust, common goals and respect to each other’s ideas. They know they can rely on each other. “We work together – not for each other,” Sergey says. “That is the main difference between a family business and a normal company.”

Besides the necessity-driven entrepreneurship during times of crisis, socio-cultural factors also contributed to the establishment of family businesses in Estonia, Latvian and Lithuania.

“Family is still an important part of life for people in the Baltics. We are more family-oriented and focused on family ties than other European countries where people tend to be more individualistic”, explains Timofejevs.

In this rather collectivistic cultural environment and imposed sets of social patterns, family culture often became the organisational guideline for all involved in the business. This can be seen with Jānis Vinters who describes working together with his brother as “wonderful” because he can trust and rely on him.

“If it was someone from outside, you'll still go and check whether everything is being done as it should be”, he says in the interview with Ir Nauda. The family bonds were tightened even more closely some years ago when his wife Signija took over responsibility for the greenhouses.

The picture is similar in many other businesses where the boundaries between family and company are fluid. The vested interest of its members in the success of their own company induces dedication, perseverance and a whole lot of extra effort. In addition, family businesses tend to have a strong orientation towards socially and ethically responsible activities. This means that they conduct themselves ― whether consciously or not ―in a way that is future-oriented and sustainable. Their long-term outlook is measured in decades or generations, not just quarters or months as in many stock market listed corporations, as studies and empirical research in the Baltics and elsewhere show.

Strengths are also sources of concern

However, family-owned businesses are not immune to challenges. Besides the standard business concerns, family companies also have to deal with their very own issues such as generational disputes, sibling rivalries, and succession issues. “Family businesses fail for family reasons” is a widely used saying in this context. Through a clear definition of roles and responsibilities, Jānis Vinters has managed to overcome any adversity so far. Sooner or later, the businessman in his late forties will have to master another challenge that is already a pressing problem for family-run companies in many other countries: passing the business on to the next generation.

This story was originally published in Baltic Business Quarterly magazine and is reproduced  by kind permission of AHK, the German-Baltic Chamber of Commerce in Estonia, Latvia and Lithuania.