On the road with Latvian exporters: Skonto Prefab

june 14, 2018, 10:09
Business
Authors: Mike Collier (eng.lsm.lv chief editor )
Skonto Prefab is a prefabricated concrete elements producer, founded in 2002 and based at an 8-hectare manufacturing site in Salaspils near Riga. But that's not where we are today. Concrete may be extremely useful but it is not the most poetic of materials. It would be hard to compose an Ode to Concrete or paint a magnificent landscape full of prefabricated concrete, even if it was livened up with a few dashes of steel reinforcement and cross-laminated timber.

On the road with Skonto Prefab

But nothing is more evocative (or symbolises exports more clearly) than a fully-laden ship sailing towards the horizon. They have been doing that from the mouth of the River Daugava for a thousand years or so and it's a popular recreation among Rigans to come to the Mangalsala mols, a breakwater extending from the river's terminus the first few hundred metres into the Baltic Sea, to watch the ships arrive and depart.

“Long before I started working at Skonto Prefab, this was the place I came cycling or walking for inspiration and moments of peace,” says Mārtiņš Ķeņģis, the CEO of the company, “but I always noticed that a lot of cargo ships and ferries go through here. It's place of contrasts, because you have couples out for a romantic walk, fishermen, cyclists and people looking for peace and quiet and at the same time you can see all the terminals, the cranes, the factories and the ships which show intense economic activity.”

“All of our production is shipped using the regular ferries to Stockholm so every day through this gate you can watch ten to twenty trucks of our products leaving Latvia. A high proportion of Latvian products heading to Scandinavia leave the same way – and of course, some arrive in the opposite direction, too. This really is the gate to and from Latvia.”

At just 33 years of ago, Ķeņģis finds himself in charge of a business with an annual turnover of 35 million euros in 2017, but when he joined the company its future was far from certain.

“The company was formed in 2002 just to produce prefabricated concrete load-bearing goods for the local market. When the economic crisis hit in 2008 the company almost went bankrupt and so a decision was taken to try to sell to the Nordic countries. It didn't work out and the company was making big losses, but in 2013-4 a new management team – including me - was brought in to find a new direction,” says Ķeņģis.

The turning point was a decision to offer not just goods but services as well. 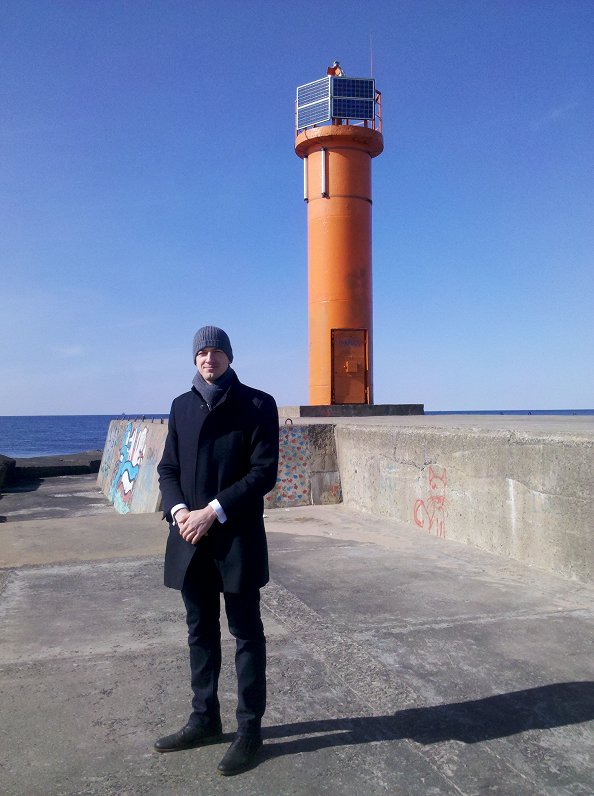 “We started to profile ourselves as a construction company which provides full services for concrete load bearing structures, from design to engineering, manufacturing, logistics and assembly. There is a team of 70 assembly guys at the other end in Stockholm. A project can last two years, and ten trucks every day for two years is a major logistics operation, so we also have our own trucks at each end,” says Ķeņģis.

The strategy worked. Skonto Prefab finished 2015 with 18 million euros in turnover and small profit after years of losses, with most of the turnover generated in Sweden. Projects so far have ranged from 1 million to 15 million euros, and the number of in house engineers has risen from 5 to 30, which Ķeņģis describes as “selling knowledge, not just pieces of concrete.” The target for 2018 is turnover of 50 million euros.

“We found what we needed to be in the market: we have to be flexible, we have to understand our clients, we have to always deliver what we promise, we have to be reliable and we have to work with what in Latvian is called degsme – something like “zeal” or “passion” in English. And as far as our customers on the other side of the Baltic are concerned, we had to prove that they could trust us. Sometimes in Latvia when there is a problem, no-one wants to take responsibility. But now as a company our role is to take full responsibility for everything we do. In a way we adjusted to the Swedish mentality,” says Ķeņģis as a biting Baltic wind and a small orange lighthouse announce the limit of Mangalsala mols has been reached.

The direct ferry link between the Latvian and Swedish capitals is crucial, making Stockholm and its environs a very viable market. But the further the distance from the ferry terminal, the more costly delivery of heavyweight concrete products becomes. A new lighter-weight product line of cross-laminated timber panels offers some future growth opportunities but even such high-tech innovations do not seem quite as new when standing beside the small lighthouse at the end of Mangalsala mols.

At one time of another it was furs, logs, tar and hempen ropes that were the latest goods setting out from this spot. Today it's prefabricated concrete and cross-laminated timber. Even as an airliner screams overhead on its descent towards Riga International Airport, a ferry steams past in the direction of Sweden. This is still Latvia's gateway to the rest of the world and will be for a long time to come.