june 1, 12:28
Business
Authors: eng.lsm.lv (Latvian Public Broadcasting), Sergejs Pavlovs (LSM.lv autors)
"The coronavirus poses no obstacle to couples, and we do see some of them here. At times, outpatients from the nearby Stradiņš Hospital arrive too. These are the main two groups of clients we have right now," says Valdis, the owner of a small 14-room hotel in Rīga's picturesque Āgenskalns neighborhood. Many of the competing hotels have closed shop, but this hotel, which opened five years ago, is still open in a building that served as living quarters for working-class people a hundred years ago.

For now, hospitality businesses, including this hotel, have changed utterly. Every room is disinfected prior to booking, and a two-meter distance between clients and staff is observed at reception. Still, most of the rooms are empty. "We have a couple clients a day, two or three mostly. It's a busy day if we have four. The high season has not started yet," said Valdis.

Only now, after the borders between the Baltic states were opened up, foreign bookings have started cropping up, from Lithuania in particular. "We can't say we're expecting busfuls of tourists right now." That is in stark contrast to what they used to have in high season – 80% of the rooms were usually booked on workdays. The place used to be almost always fully booked on weekends.

Small hotels have been, well, courting lovers looking for a place to stay privately. An ad for a Rīga hotel mentions you can rent a room for just a couple of hours. In some cases the offer comes with the added bonus of "discreet car parking", i.e., the chance to park in a closed-off space. The offer is typically for three to four hours, and the price asked is €20 to €30, often the same you'd pay for booking the same room for the night. 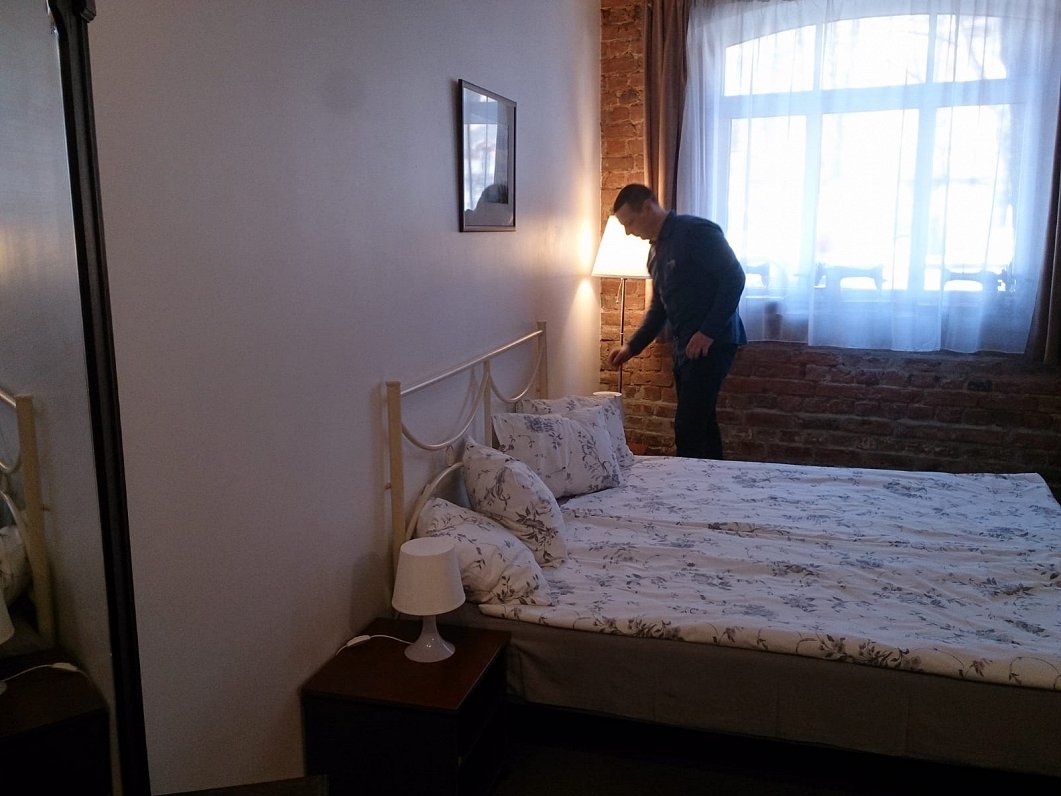 "After many of the larger hotels in the vicinity were closed, these clients started coming to us. We usually have one to two couples arriving a day," said Valdis.

"It's peanuts, of course. We've no foreign tourists. We had had a fantastic corporate client from Japan for the past five years. They were quiet, courteous and intelligent. Now they're not arriving," Valdis said, adding that now they've kept off-season pricing to attract more clients.

In addition, he said the hotel offers a discount to patients arriving to the nearby Stradiņš hospital. If they'd offer the discount to all clients, then people of the kind they don't prefer would start arriving. "It's no use [lowering prices]. If you drive it down to €15 you'll get more problems but won't have more bookings. We know because we've tried," said Valdis.

Cutting costs is another thing they've been doing. One employee has left, and they've stopped outsourcing cleaning services. The hotel tried paying state-covered furlough benefits but realized they don't see the situation improving anytime soon. "It's better to sack someone instead of giving them false hope. The girl we had working here has found another job and is receiving a steady salary," the owner said.

The main problem Valdis' business is facing is bank loans. "The banks offer putting off payment for three months but it doesn't solve anything. [..] The banks are asking for a real estate evaluation. This costs some €600 to €700. But the new evaluation is unlikely to be good, and in this case the bank can ask for extra collateral, guarantees and so forth. Plus a fee for changing the loan. In the end, you've spent money, the three months have passed by and the terms are worse," said Valdis.

For now, having diverse sources of income helps. One of the two buildings he owns has rental apartments, but this segment is too not without its problems. "We usually had foreign students there, but some of them are about to graduate and others left as soon as the virus appeared. Therefore we're offering apartments in the local marked. That's what we're doing."

The thing he fears the most is that local clients could become unable to pay as well. "I'd say we'll survive the summer but we'll have to do a re-think in the fall. It helps that we're a small business. While the big ones are closed, we're still trying to stay open."