A report by the European Central Bank touts Baltic and Slovakian achievements in moving towards achieving economic parity with the rest of the EU. The report notes that the Baltic states have significantly outperformed initial expectations but does warn that challenges are ahead should the countries wish to remain on the current path of success.

"The Baltic States are among the few euro area countries (along with Slovakia) in which real GDP per capita in purchasing power standard (PPS) terms has shown substantial convergence towards the EU average over the last 20 years," the report says.

"While in 1995 their average per capita income (in PPS) stood at only around 28% of the EU15 average, in 2015 it reached 66.5%. It is also noteworthy that all three Baltic States experienced deep declines in real GDP in 2008 and 2009, but enjoyed strong recoveries afterwards," says the ECB. 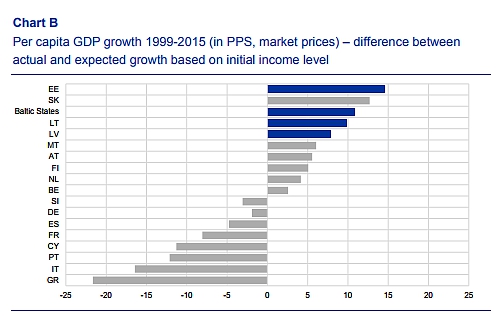 "The strong convergence performance of the Baltic States should be assessed against the background of their very low initial income level at the beginning of their transition to market economies in the mid-1990s. However, their performance has exceeded what could have been expected from an equation linking initial per capita income levels with growth over the period from 1999 to 2015," notes the report.

The report however also warns that the Baltic economies face the following challenges now and in the future: (1) preserving competitiveness against the backdrop of a strong increase in wages and slowing productivity growth; (2) avoiding the “middle income trap”; and (3) managing a volatile business cycle inside EMU.