The Latvian Finance Ministry has spent 100,000 euros on publicizing and promoting the contents of its 2018 budget among a selection of media outlets, Latvian Radio's Edgars Kupčs reported October 13.

In recent weeks, a number of newspapers have reported on the Finance Ministry's prepared budget, and particularly the major tax reforms it contains, and usually in a positive light.

However, that appraisal may have been colored by the fact that the ministry was itself paying considerable sums for the coverage, despite the fact that the features in question were often rendered in the fonts and styles of the newspapers themselves and featuring bylines by staff reporters -- moving the whole thing close to the shady status of "advertorial'' content in which advertisement and editorial content is mixed.

A prime example appeared October 1 in the top-selling Latvijas Avize newspaper. It features a large interview with Astra Kalane, director of the Direct Taxation Department of the Ministry of Finance and is full of information about how pensioners will benefit from tax reform. It carries the byline of staff reporter Zigfrids Dzedulis, but it does not include any statement that the Ministry of Finance has paid for the coverage, reports Edgars Kupčs. 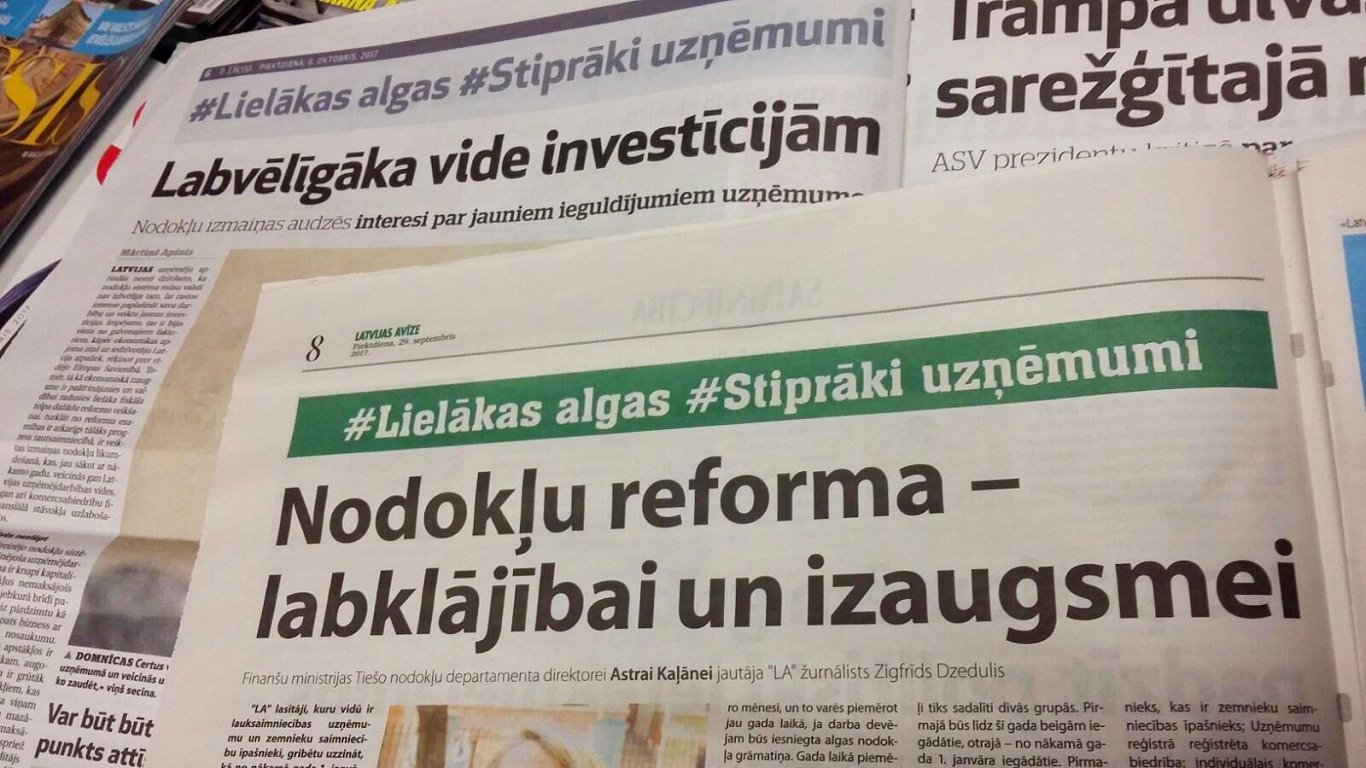 Gatis Madžins, the editor in chief of Diena, does not see this as a problem, saying that it is not unusual to cooperate on such public information projects by official bodies: "We do not differentiate whether this is a project of the European Commission, or whether it is a project of the Cultural Capital Foundation.

The main issue is whether reporters feel they have editorial independence, he maintains, saying "In this case, I do not see any problems in our content. "

Readers fully understand the nature of the content when they see a line at the end of such articles declaring "Produced in cooperation with the Ministry of Finance," says Madžins.

The same interview has appeared in regional media, too.

Alexis Jarockis, a spokeswoman for the Ministry of Finance, said that in the spring, advertising agencies had been hired to publicize tax reform and explain the changes to various groups including the general public and accountants.

The authors of the features being run in newspapers include both media professionals and the ministry's own employees, Jarockis says.

However media lecturer Anda Rožukalne says the use by the state of such advertorial material raises serious questions about the independence and trustworthiness of media sources.

"Such cases look very badcoming from the state institution, because they completely discredit impartial communication. If a public official can buy interviews with the ministry's money in support of his particular job, this degrades journalism," says Rožukalne.

The Ir news weekly first noticed and reported the phenomenon upon which Kupcs'report is based.

Ir said the publicity campaign deal signed by the ministry and media agency Media tilts began in September and will run until the end of the year. The ministry declined to tell Ir how much individual outlets were being paid to carry the budget advertorial material.

But nor has Latvian Radio itself been immune to similar allegations. The Latvian media regulator recently dismissed a member of Latvian Radio's board, citing commercial agreements that indicated the coverage of certain topics on certain broadcasts as one of the reasons. Ironically, the agreements were published by Latvijas Avize.