In 2022, Latvia produced 4,794 gigawatts of electricity (GWh), which is 14.5% less than a year earlier, while Latvia's electricity consumption decreased by 3.7%, reaching 7,106 GWh per year. Electricity imports thus increased last year, according to an overview of the Latvian electricity market prepared by Augstsprieguma tīkls (AST, “High Voltage Network”) January 25. 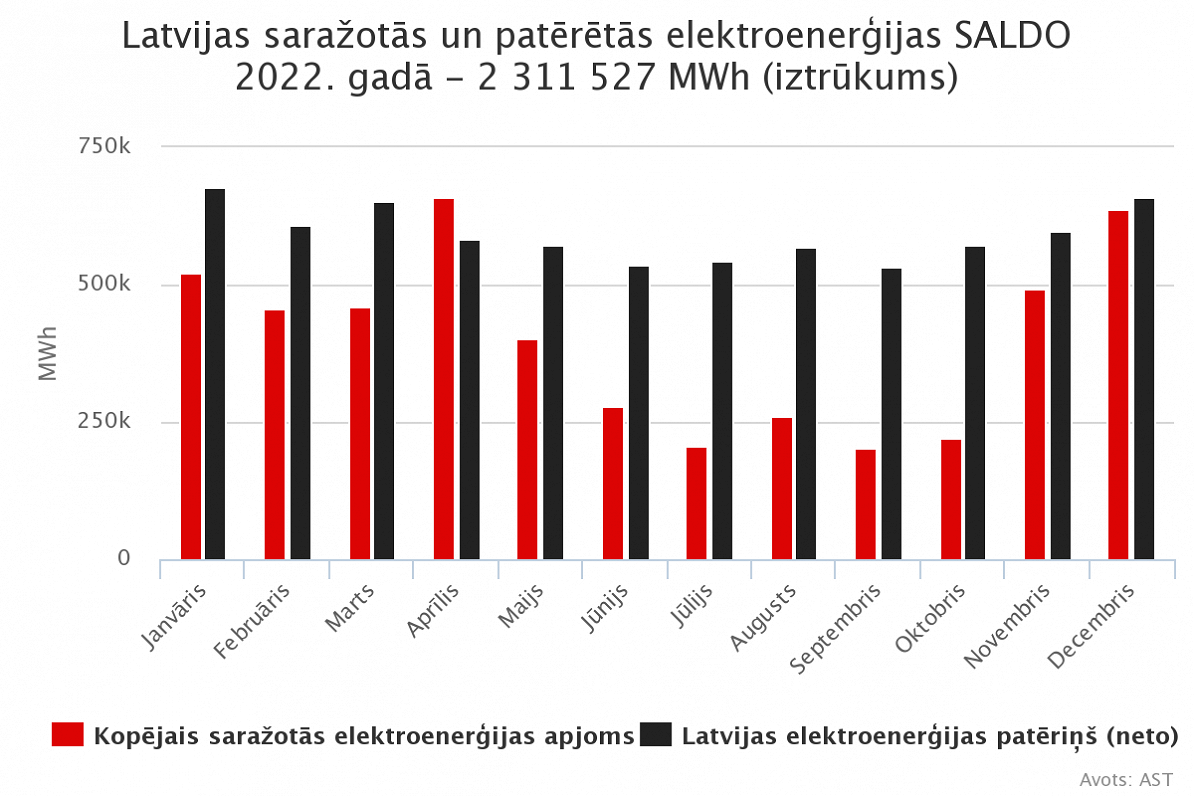 AST reported that electricity generation increased in the generation of renewable resources in 2022:

On the other hand, fossil fuel plants are experiencing a drop in production. Electricity generated by large cogeneration plants has decreased by 36.9%, with the contribution of small cogeneration plants continued a steady decline in the last six years, with a drop of 67.5% in 2022. Biomass electricity production dropped by 5.9%, and biogas by 9.4%.

The changes in the production structure are linked to the high gas price, resulting in the operation of large cogeneration plants in a minimum mode between March and August, as well as the connection of new wind and solar power plants to the grid.

In 2022, electricity prices continued to rise in Latvia and Europe, reaching the highest historical prices in the summer months.

Prices fell after a record in August, when the average monthly electricity price reached EUR 467.75 per megawatt-hour (MWh), while on August 17 the price reached the NordPool exchange's maximum hourly price tag of EUR 4000 per MWh.

In 2022, the average electricity price in Latvia was EUR 226.91 per MWh, representing an increase of 156% compared to 2021. The sharp price increases were caused by a number of circumstances, especially the Russian invasion of Ukraine – concerns about energy adequacy in the forthcoming winter in Europe over the summer months, with gas prices rising dramatically, which gradually decreased at the end of the year. Prices were also affected by the withdrawal of electricity imports from Russia and Belarus by the Baltic States and Finland.

Similarly, the price increases were driven by hot weather in Europe, resulting in a reduction in water supply to the reservoirs of hydroelectric plants in Scandinavia and growing energy consumption for cooling.

In view of the decision of the Baltic States to reduce electricity imports from third countries by March 2022 and the total withdrawal of electricity from Russia and Belarus by May 2022 due to the hostilities in Ukraine launched by Russia, imports from these countries have fallen by 77% on an annual basis compared to 2021 and were at 1.095 GWh.

Imports from third countries to the Baltic were replaced by European production, with a total increase of 20%. In total, 12,716 GWh of electricity was imported:

Latvia's consumption with local generation was covered at 67.5%,  a reduction of 8.52 percentage points compared to 2021.