june 18, 2019, 9:00
Economy
Authors: eng.lsm.lv (Latvian Public Broadcasting)
Both forest workers and owners agree that the restoration and preservation of woodland is a difficult task. There is often a shortage of resources as well as knowledge and experience, and wildfires and wildlife also play a negative role. Although it is often believed that forests can grow and survive without human intercession, this happens to be a far cry from truth. In order to draw attention to this, the Latvian Forest Owners' Association is organizing for the third year already the “Best Forest” competition, reported LSM's Latvian service on June 17.

Latvia is the fourth most wooded country in Europe – forests occupy 52% of the Latvian territory. In Latgale, the landscape is slightly different, and has its specificities, says Vilmārs Skutels, Senior Ranger of the South Latgale Forest Service:

“Neither in the 30's, nor the Soviet era was the Latgale region particularly wooded, and in our forestry area woodland takes up 34% of the overall land. It should be said that our area – South Latgale – stands out because of the large percentage of private forests. There are 80% of private forests surrounding the towns of Krāslava and Dagda. And tree felling in private forests is quite intensive”

On average, 14-15 million cubic meters of woodland are felled every year in Latvia. This is a contribution to the economy, though it does not always benefit the forests themselves, Skutels admits.

“They buy and they sell. It must be that the generation of strong and conscientious forest owners who renewed their forests in the early 90's and spared them have now gotten older, and feel that they can't manage by themselves any longer, so they have started selling their forests. We see that many coniferous areas are now being felled. In my view, we are experiencing a second waves in sales,” said Skutelis.

Forest management – especially if it is done properly – is not easy, and forests are also a crucial part of the cultural environment of rural Latvia. This was the rationale for starting the “Best Forest” competition, the aim of which, was to set a good example, say the contest organizers The Latvian Forest Owners' Association.

“Certainly, forest owner should be shown examples of good forest management. Whether the forest owners care for their forests or not makes a huge difference, and it can be seen in the production and stock of wood.

And this is the question of how well we are using our main resource – woodland. By organizing this competition and visiting its participants, we get to know how they are doing and are able to show them examples of good forestry – how the forests are restored, planted, cultivated, and what forest infrastructure is being used, so that they could gain insight into their own ways of managing a forest,” said the chairman of the board Arnis Muižnieks.

Antonijs Kozlovskis inherited from his Polish ancestors several forest properties in Latgale amounting to more than 100 hectares of land. Some of them, like the one in the Preiļi municipality, have a protection status and contain natural rarities, such as centenarian oaks, remarked the owner, who has spent his life working as a ranger and getting to know the forest by caring for and restoring it. 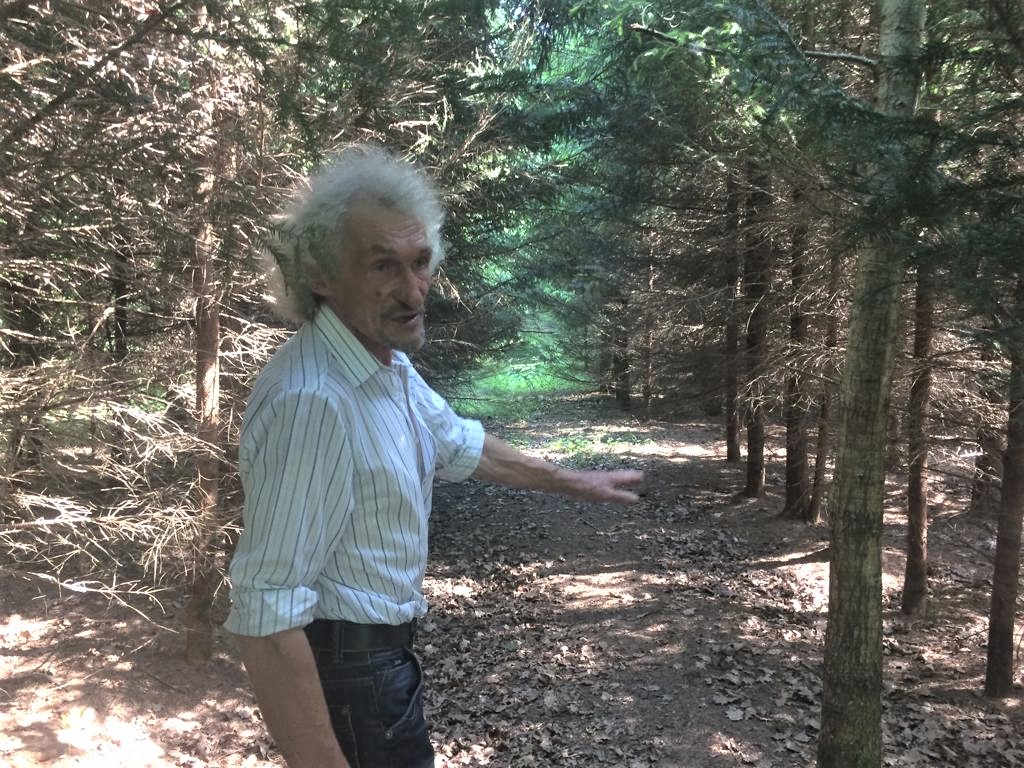 “There are many ancient and big oaks, this one is over a thousand years old. But this large linden was planted in 1880.

I am not selling my forests, they are like a bank to me. The terrible thing now is that people tend the felled areas but living forests have to be taken care of, especially the new ones, and the most important thing – the woodland should not to rarified too much,” Kozlovskis stressed.

It should be carefully considered which tree to fell and which not to, the forest owner points out. There are enough pests and natural disasters as it is, and quality wood can be grown only by foreseeing these adversities. The forest should also not be raked clean, as the plants and animals that inhabit it play an important part in enriching the soil.

Kozlovskis' forest, which spans a hill resembling an ancient castle mound, also has a large stone with the year 1300 engraved upon it. The forest was populated, then, as far back as the 14thcentury, if not early, and the stone is a historical artefact. Kozlovskis' aim is to preserve this heritage and start showing it to others, perhaps by making footpaths across the land.

It is of course not for the sake of the contest that this owner is tending and cultivating his woodland. Still, his work and experience is a great example for other forest owners, whose task it is to care for the wealth of Latvia – its forests.
Seen a mistake?