Rail Baltica study says 40 C summers are on the way

september 27, 2019, 14:44
Transport
Authors: eng.lsm.lv (Latvian Public Broadcasting)
A climate study commissioned by the Rail Baltica infrastructure project predicts that within the next 30 years, summer temperatures could soar to more than 40 Celsius in the region.

"Based on the analysis of the past 30-year climate and weather data and national level climate projections, the study concluded that the Baltic region would gradually experience milder winters with less snow, but more wet snow [sleet], freezing rain, glazed frost and ice formation events. In summertime, more frequent heat waves are likely, leading to maximum temperatures around or even over 40 C.

"Additionally, the study expects more heavy rainfall and thunderstorms in the region, as a result of higher air temperatures, which may cause more intense formation of typical summer thunder clouds and increased wind gusts speeds in the summer," Rail Baltica said in a release.

The detailed report predicts frost days will reduce by up to 80 days per year by 2100. Snow cover will decrease substantially and not permanently form and the spring peak runoffs will be earlier, lower and less steep. The frequency of freezing rain and hail will grow "highly probably" and thebiggest direct human risk where weather is a factor is passengers slipping over.

More heatwaves  are predicted with "high confidence" including summer maximum temperatures of around 40° C, according to worst case climate change scenarios. Wildfire risk will increase, too. 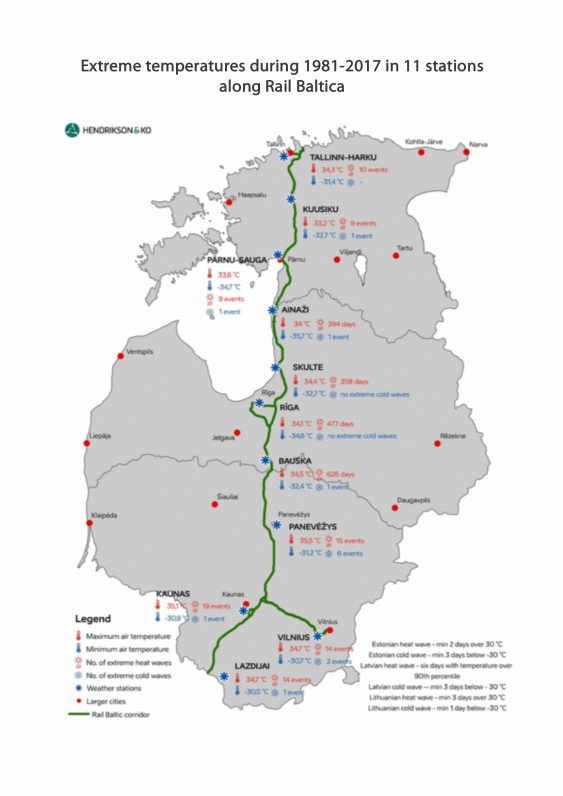 The study was commissioned by RB Rail AS and conducted by the Estonian environmental management and spatial planning consultancy company Hendrikson & Ko in cooperation with SIA Vides Eksperti and DGE Baltic Soil and Environment. The main objective of the study was to prepare for upcoming climate changes during the whole lifecycle of the new railway line ensuring that infrastructure is sustainable and prepared for different climate change scenarios.

''Climate change is becoming an important element in designing and constructing infrastructure objects that will serve the public needs for decades to come,” said Martin Ruul, the leading expert at Hendrikson & Ko. “It is important to note that the management of climate risks should be integrated into the general risk management, monitoring and control systems of Rail Baltica and not managed as a stand-alone subject”.

According to the informtion from RB Rail, climate changes can highly impact the construction, maintenance and operation of railwaya. Heavy rain, winds and storms as well as snow, freezing rain and glazed frost can suspend the operation of railway or can seriously damage the infrastructure and affect passengers.

The full study is available to read online.

As previously reported, Rail Baltica is a double track, European standard 1,435 mm gauge electrified railway for passenger and freight transport to be built from Tallinn to the Lithuanian-Polish border. The overall length of the railway will be 870 kilometers. The total cost of Rail Baltica in Lithuania, Latvia and Estonia is estimated at around €5.8 billion with the first trains due to start rolling in 2025.