“The needs of our armed forces are similar, but not identical. Through mutual discussion we concluded that the market doesn’t have a vehicle platform that fulfills all the needs, so we made the decision to begin a research and development program based on the Patria 6x6 platform,” said Pabriks.

The cooperation program, which allows for the possibility of additional countries to join, will enhance mobility, be more cost-effective, and improve interoperability and security for the participation countries. If the research and development stage is successful, the National Armed Forces could receive the vehicles as soon as 2021, with yearly deliveries over 10 years.

Estonia also sign a letter of intent along with Latvia and Finland in December 2019, expressing an interest in acquiring armored vehicles for their national armed forces. One of the preconditions for Latvian involvement in the project includes the opportunity to include domestic industry in maintenance and repair of the vehicles. This technology transfer will be further discussed with the chosen Finnish producer. 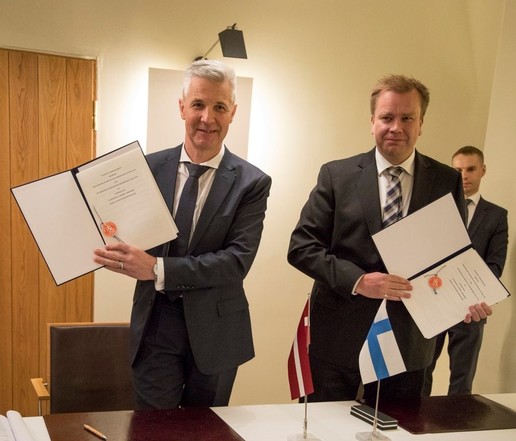 As previously reported, the agreement will provide the basis for a more beneficial procurement offer and mutual interoperability of armored vehicles, including maintenance and repair capacity, along with strengthening local industrial capacity.

The technical agreement calls for discussion period regarding research of the armored vehicle systems, which, if successful, will be followed by discussion in each country regarding signing a framework agreement. This would allow the countries to procure development system elements based on the needs of each country.

The technical agreement is political and not legally binding, and doesn't require any of the signatories to ensure specific services or products, according to the Latvian Defense Ministry.