54% of the cases of Covid-19 Omicron type registered in Latvia are of local origin, according to the report presented to the government by the Ministry of Health on the epidemiological safety situation, LETA reported January 6.

Approximately half of the local cases are secondary (infected contact persons), while the other half are local cases with an unexplained source of infection conditions,  and for seven cases there are no data. According to the information provided by Health Ministry, the most local cases of Omicron were recorded around the New Year and Christmas holidays.

It was reported earlier by LSM that the Omicron strain has also spread rapidly throughout a nursing home.

46% of cases have been introduced from abroad, of which 69% were identified among arrivals at Riga airport. In about 24.5% or 158 cases, the epidemiological investigation is still ongoing.

"Colleagues, the rapid spread of Covid-19 Omicron locally has begun. It was our expectation and it has, unfortunately, come true. And currently, the speed of the increase is consistent with the forecasts about [case numbers] doubling within two to three days," said Health Minister Daniels Pavļuts at the government meeting. 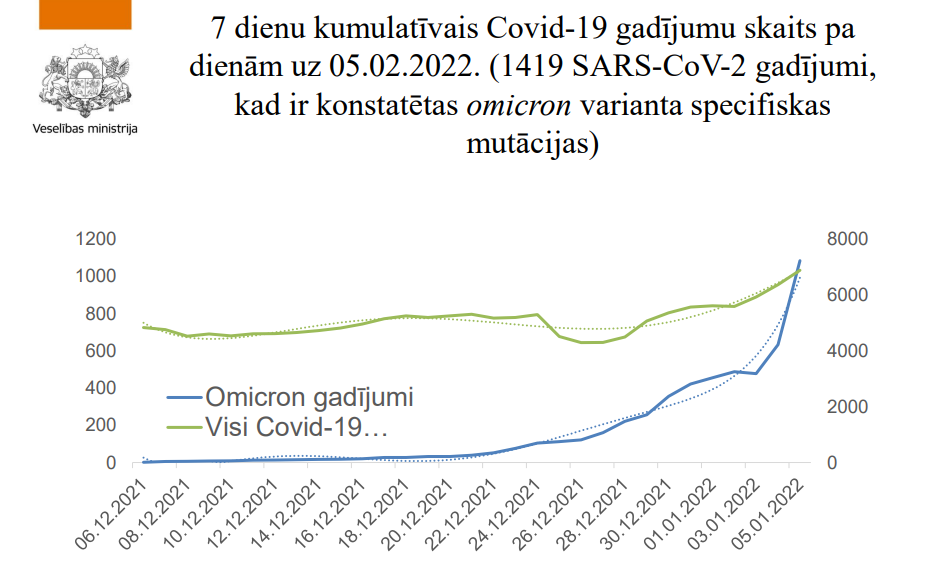 Disease Prevention and Control Center's epidemiologist Jurijs Perevoščikovs confirmed the claim and said that presumably around half of all cases confirmed in Latvia could be linked to the Omicron strain. Precise results are still being investigated in the labs.