Genādijs' story: Independent living after a lifetime in care institutions

september 24, 2019, 15:06
Society
Authors: Justīne Savitska (Latvijas Radio multimediju satura producente un LSM.lv autore), Annija Petrova (Latvijas Radio Ziņu dienesta korespondente), Sergejs Kuzņecovs (Latvijas radio Latgales studijas korespondents)
Genādijs has spent his entire life outside his family. He lived at an orphanage, studied at a boarding school and lived at care homes. He has spent time at a psychiatric hospital as well. But his story is not unique in Latvia. Even when they are able to look after themselves, people with intellectual disabilities continue their life inside institutions. For years, Genādijs tried to find his relatives, and it's only after finding them that he gained a degree of freedom.

This is a Latvian Radio documentary that appeared on LSM's Latvian-language service September 24. Some of the people mentioned in this story are dead and the details about some of the memories and events could not be checked.

Genādijs is of an average height, he's thinly built and wears a checkered shirt. He's 39 years old, and he's spent seventeen years in care homes living with elderly people. He was able to leave the premises only with written permission from management. He had a gardening stint and also worked as a men's barber for some time.

Every institution has its own order. That was what Genādijs realized in boarding school. He says he got sick a lot as a child and got sent to a Russian-language boarding school for children with intellectual disabilities. Studies went slow, and he had problems with reading and writing, with the result that he finished the mandatory nine-grade education at the age of 21.

At the boarding school there were children who had families, and they didn't make much friends among the kids from the orphanage. "It's easy to become resentful this way," says Genādijs.

Genādijs grew up at the time when the Soviet Union had collapsed. Latvia had just regained independence, and it was difficult. The economic system changed. Many lived in poverty and crime was rife in society. Democratic institutions were rebuilt from scratch, and care homes and orphanages inherited Soviet methods, with the people living there isolated from the rest of the public.

In search of his sister

At first, Genādijs did not know that his parents had had other children who are alive. At some point his sister Svetlana started looking for him.

Her adoptive mother wrote to the director of the orphanage, but there was no reply from Genādijs. Perhaps he wasn't told about his sister at once. Svetlana says she sought for her brother for a long time, from the early 90s. Later on her husband, a policeman, tried helping, to no avail.

It is unclear how and when Genādijs found out his sister was trying to contact him. "If you have a thread to latch on to, a straw maybe, you pursue it. And that's it. And that's how you find them," he says.

Genādijs started changing care homes to get closer to Rīga where his sister lived. He couldn't just pack his stuff and go to another care home. You can obtain a transfer from one institution to another if you know what you want and are prepared to talk and to write applications. You have to wait until someone at the other institution is willing to switch, or else leaves, or dies.

Theoretically, the municipality had to grant Genādijs a place to live or a rental benefit. It is not clear why this didn't happen back then. Perhaps the municipality was unable to do it, and the simplest solution was to send him to a care home as he was disabled.

When he learned where his sister lives, Genādijs went up to her, rang the door of her apartment and pretended he's the gas utility man. "You can't just go and shock somebody," said Genādijs, explaining why he hadn't told her he's her brother.

Svetlana, however, remembers the first meeting differently. They had talked on the phone and she had given Genādijs her address. When he arrived, she expected they would at least have a hearty hug. But Genādijs had moved her aside and went to the bed of her daughter. They later talked emotionally throughout the night, however.

Genādijs thinks she simply forgot the gas man performance. "She doesn't remember. It was all very fast. She was shocked and so was I."

Genādijs and Svetlana arrived at the same orphanage. Svetlana has read documents that they'd been removed from their family as they had been left on their own and Svetlana had gone around asking for food.

But it was easier to separate children back then. According to the Welfare Ministry, it is impossible for siblings to be separated without them having information about one another.

Svetlana learned she was adopted only at the age of thirteen. Her father told her. "I became hysterical. I ran away from home for two days. I stayed at my girlfriend's. I cried it all out. I came back home. My mother was angry that I had learned it. And then my life changed. My [relationships with my family] changed absolutely," Svetlana says.

When she asked her foster mother to help finding her brother, she had said that Genādijs had been very ill and it's unlikely he had survived.

But survive he did, and eventually he was able to find his relatives.

After they met up in the late 1990s, Genādijs started visiting his sister. He visited for Christmas, New Year's and birthday celebrations. Svetlana had little children to look after and didn't visit. Since 2010, Svetlana has been living abroad, after having left during the economic crisis.

Finding and losing their father

It is likely he was unable to meet them at the orphanage as groups of children were separated by age. This too was Soviet heritage, which according to the Welfare Ministry is not practiced anymore.

Genādijs was able to find one of his brothers. The other, he learned, had died young. He found out his mother had died.

But he was able to meet his father. They had a look at one another. His father said he was sorry. "We had a good talk. He apologized. I don't hold anything against him," says Genādijs.

Svetlana recalls that their father had asked where she has a mole to find out if she's his daughter. She had many questions. Their father said he and their mother were separated soon, as he had a different family. He also said their mother had been murdered.

But Svetlana and Genādijs' father died – after being shot, according to Genādijs – soon after they'd met, and many of their secrets were buried with him.

At his father's funeral, Genādijs met a relative with an offer. He left the care home and started living at her place. His relative had promised to help him get an apartment to which he was entitled from the municipality after leaving the orphanage. "The only free cheese is in the mouse trap," Genādijs now says.

Alīna – the name was changed for the broadcast – had invited him, and it was unusual but good at first. "When someone leaves an institution and starts living with someone else... You've spent many years there with little communication. You're something of a wild man. You have to get used to the hour of getting up, and to the chores," he says.

But as time went on he became suspicious, as did his sister. Svetlana says that Genādijs' new caretaker had taken the bank card which he used to receive the disability benefit. After having called Alīna, she was not convinced by her replies and was instead told that Genādijs had gone to live with them on his own accord.

But Alīna, whom Latvian Radio visited at her countryside house, a pleasant two-story building with dogs and hens in the yard.

She says she was sorry for her relative and offered to house him. Genādijs had helped them at home and had some on-and-off jobs on the side.

Like many people with disabilities, Genādijs receives a state pension. It is very difficult to get by with that money. The benefits are capped at €170 a month for people who have never held a job. The minimum wage in Latvia is €430 before tax.

But they had arguments about how much food Genādijs gets to eat. Alīna also says he had a temper. His financial know-how was dismal, according to Alīna, so she took his bank card.

She tried to use the card to withdraw the monthly benefit but it was blocked.

At some point Alīna wanted to assume guardianship over Genādijs. This required a psychiatrist's conclusion, and Genādijs spent a couple of days at the hospital. But the only result this had is that Genādijs became worried she might start using the threat of psychiatrists as leverage.

Genādijs left and the two are still estranged.

No coming back to state institutions

The Welfare Ministry says that now people wouldn't suffer Genādijs' fate. In Latvia, the goal is to reduce the number of people staying at institutions and that there would be chances for people to leave them. Using EU funds, attempts are made to establish a support mechanism for people who want to live among the public.

Genādijs' experience shows it's very difficult to live if you've spent your life within a system that doesn't attempt to prepare people for an independent living.

To the chagrin of his sister, Genādijs left the care home, but he doesn't want to come back to what he sees as a life of limited freedom. 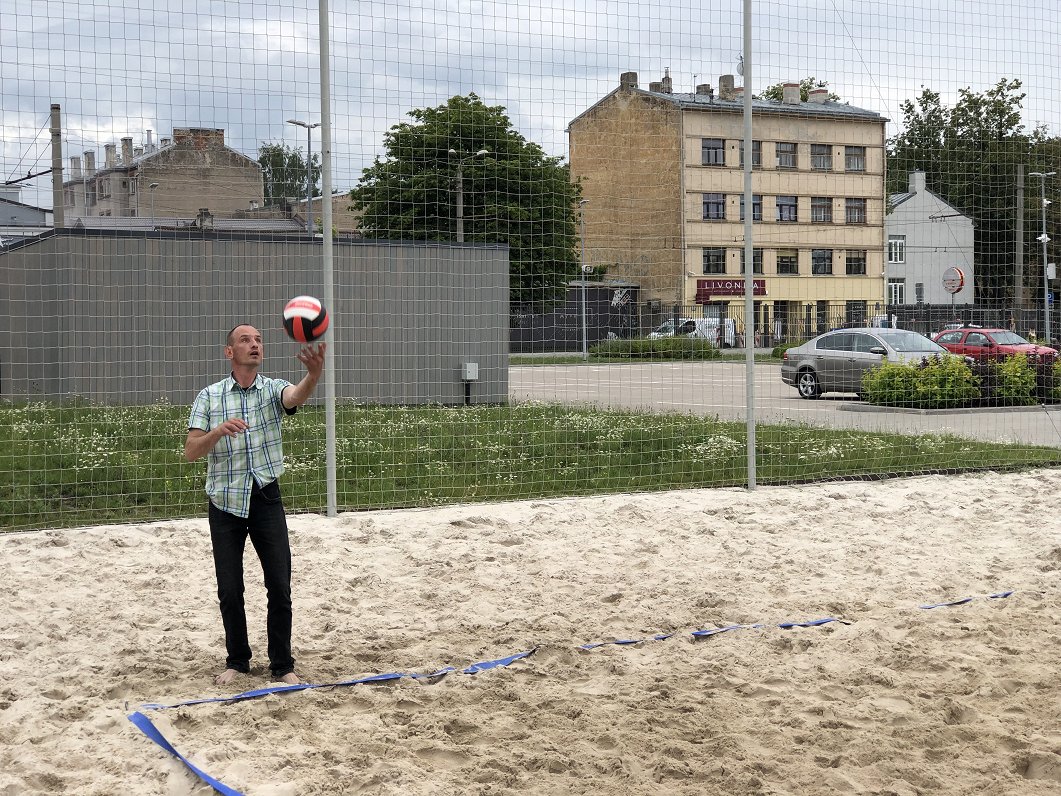 He now has a dedicated support worker and was offered a group apartment to live, as people living there are taught the skills necessary to live alone. But Genādijs refused, as it would have been too much like returning to the care home.

Genādijs is currently renting a municipal apartment and studying to take a Latvian language exam, in parallel to looking for work. For now, he hasn't been successful.

While he and Alīna are estranged, he is happy to have seen his father.

"Why should I blame someone? It's life. It's fate. You just don't know. You aren't in their skin and their head. You can't enter their brain and see what's happening inside."