may 8, 2018, 12:17
Society
Authors: eng.lsm.lv (Latvian Public Broadcasting)
The Ministry of Foreign Affairs has issued an open invitation to Latvian residents to celebrate Europe Day on May 9.

"This year’s focus is directed towards young people, who are invited to explore, reason and share their ideas on the European Union and its future. The European Union is celebrating its 68th anniversary this year. By tradition, the Ministry of Foreign Affairs together with its partners is holding an Open Door day on this date," the ministry said in a press release.

At 13.00, Europe Day at the Ministry of Foreign Affairs will be opened by Zanda Kalniņa-Lukaševica, the Foreign Ministry’s Parliamentary Secretary. Participants will be greeted with a musical performance by the primary school girls’ choir of the Riga State Gymnasium No 2.

Senior grade students will have an opportunity to test their knowledge and prove their erudition in Brain Games. Winners of the competition will be offered a trip to Brussels and receive other prizes.

The audience will be invited, together with the Foreign Ministry staff, to present their perspective of Europe’s future in a visual format. In conversations, answers will be provided to questions on the Foreign Service, its history, and on travelling safely. Visitors will also be able to see the original of the Treaty of Accession of Latvia to the European Union.

Visitors are asked to show ID upon arrival at the Foreign Ministry. 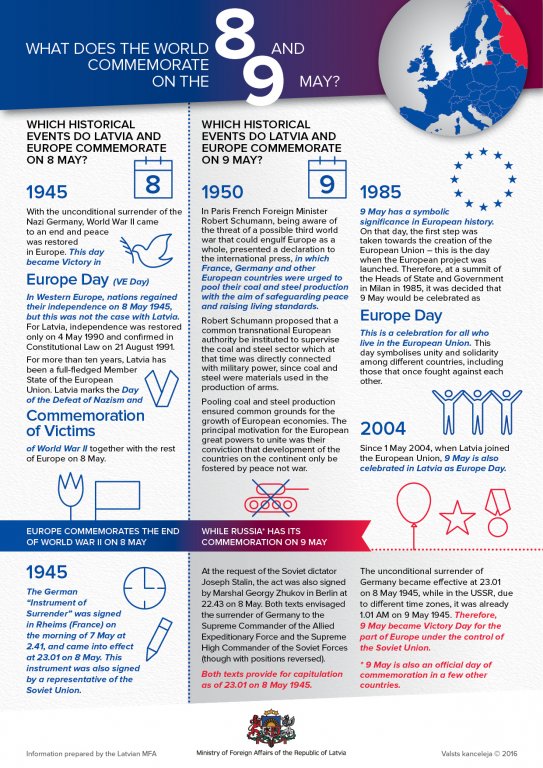