march 9, 17:32
Society
Authors: eng.lsm.lv (Latvian Public Broadcasting)
The Organization for Economic Cooperation and Development (OECD) released its latest How’s Life? report March 9, which says household disposable income per capita has risen in more than half of OECD countries since 2010.

Latvia has been an OECD member since July 2016.

Employment rates are up by nearly 5 percentage points on average for people aged 25-64 (today, almost eight in ten adults are in paid employment), and fewer people are working very long hours.

Life expectancy has lengthened in most countries since 2010 while the number of households living in overcrowded conditions has fallen. Murder rates are down by around one quarter since 2010 and people generally feel safer on the streets. Recent surveys also suggest people in more than one-third of OECD countries are more satisfied with their lives, relative to how they felt in 2013.

Although two-thirds of people in OECD countries continue to be exposed to dangerous levels of pollution, air quality is improving.

But the report’s extensive data shows that not all aspects of well-being have improved, and that Latvia has considerabale scope for improvement in some of the data sets. The full summary for Latvia (data applicable for 2018) is attached to this story in PDF form.

10 percent of the population reports ''low life satisfaction'' and 9 percent say they have no friends of family to turn to in times of need. As for social interactions per week, there was simply no data available for Latvia.

Inequality is also quite pronounced with the wealthiest 10 percent of the population owning 63 percent of the wealth - the fourth highest ratio in the OECD after the USA, the Netherlands and Denmark. 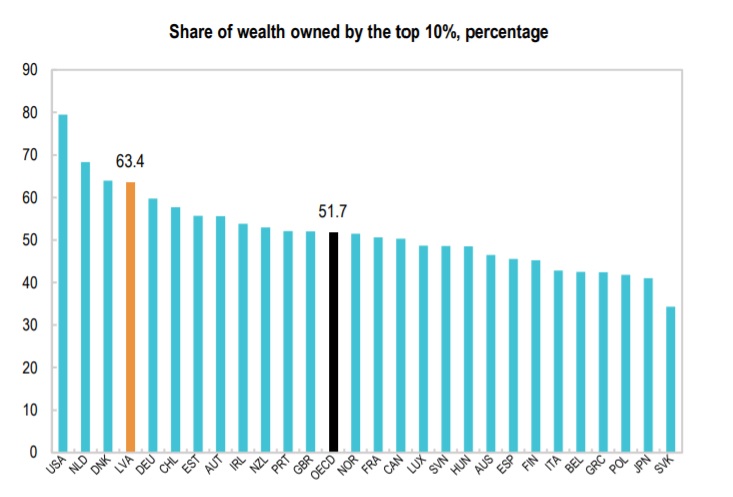 “The gains that we have seen in well-being are a source of optimism, but they are uneven within and across countries and are still at risk, notably in view of the environmental developments. The coronavirus epidemic that is now spreading to so many countries is also affecting not only our health, but also our social lives. With the economic impacts already beginning to take hold, it will also affect people’s incomes and livelihoods. This is especially true for those in precarious jobs with few safety nets to catch them in the event that they cannot go to work.”

“Governments need to take action to protect the most vulnerable – both in terms of their health, but also in terms of financial vulnerability.  To secure future well-being, there is no alternative but to build up long-term protections and preparedness against risks,” said Gurria.