may 17, 2019, 19:28
Society
Authors: eng.lsm.lv (Latvian Public Broadcasting)
New research at the University of Latvia Institute of Philosophy and Sociology probes ideological polarization in the Baltic states.

As the authors Mārtiņš Kaprāns and Inta Mieriņa – both researchers at the institute – note, discourses testifying to ideological unrest, such as "Make X Great Again" and "Take back control", have also resonated in the Baltic states, "where, along with ever present geopolitical matters, political actors and the members of civil society have problematized the understanding of Western values."

"Specifically, the public polemics after the European refugee crisis in 2015, the voicing of isolationist ideas, and the criticism of liberal order as well as a general sense of existential anxiety about the future of one’s country have nurtured ideological polarization in the Baltic states," the report notes.

But the authors are careful to note that they "do not intend to conflate the polarization in Baltic countries with the situation in Western Europe where formally similar ideological cleavages are rooted in different structural conditions."

Spanning 88 pages, it is of great interest to policy wonks and sheds light on very current issues such as increasing Baltic optimism for the EU after the Brexit vote, extreme perceived dependence on EU funds in Latvia and Lithuania, as well as changes in anti-elitist sentiment across the three Baltic states. 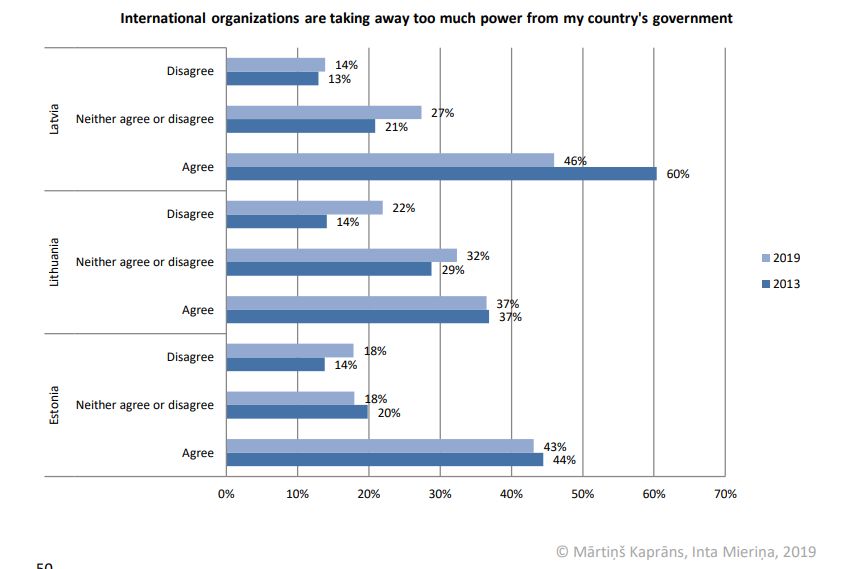 The representative survey covers national opinions in other areas of interest, such as perceptions of Russia as a threat, Baltic views on sanctions, national pride, attitudes on immigrants and more.

The authors say the data was collected in face-to-face interviews with 3031 in the Baltic states in January 2019 by three research agencies: SKDS (Latvia), Baltic Surveys (Lithuania), and Turu-uuringute (Estonia).