Volker, farmer from Germany, says starting business in Latvia was an adventure

may 31, 2019, 16:46
Society
Authors: Māra Rozenberga (Latvijas Radio Ziņu dienesta korespondente)
Volker Hoepner comes from Germany. For the past eighteen years, he has been living at Raņķi near Skrunda where he owns a big farm.

It's impossible to miss Volker's businesses when you're in Raņķi. There are two factories lining both sides of the main traffic road, with Granova company producing chicory and BiAgro producing cereals. He met Latvian Radio together with his wife and daughter. "Greta. One-and-a-half years. That is Krista, the wife," he said (we've tried preserving Volker's charming accent in the English translation). Latvian Radio would later learn they have six daughters.

The chicory processing company Granova is located at the former Ziedonis (Spring) kolkhoz factory. As soon as we're inside, Volker is eager to show the lab and premises for drying, as well as the product, which is used to make chicory coffee. "The Inka coffee [label] uses our product, this chicory chips, which go to the coffee factory," he said in a characteristic German lilt.

He arrived in Raņķi in 2002 with the support of a German investor and 400 hectares of land. Now, there are more than 2,000 hectares of arable soil, forest and pastures. They don't limit themselves to their famous chicory. "There's wheat and barley, rapeseed and, this year, oatmeal too," he said.

It's very much a high-tech operation they've got running at the farm. "We've a dron. We fly over field and see all mistakes well from above – where the pesticide sprayer isn't working, which locations are covered and which aren't. This is all filmed with the drone, made into a movie and shown to the worker. Maybe he thinks – the boss don't see this. But we do. We see all the mistakes," Volker said and immediately displayed an advertising picture of his fields combed by a drone.

He is obviously very proud of his farm.

Volker was born into a large family of farmers in what was then West Germany, between Lubeck and Kiel. He studied agriculture and first came to Latvia for his internship. He was then 29. "In summer 2001 I was intern at Talsi region. Up there, in a farm. Two investors started working. I liked this a lot, and dann I finish my diploma. And then I come back in 2002. Brought machine to here in June, before Midsummer, bring the stuff, the furniture and come live here in Raņķi," he said.

Volker found an investor, established a limited-liability company and set to work. He chose Latvia as he was young and it was interesting here. "It wasn't Europe yet, Latvia noch was an own country. It was an adventure. Abenteuer. Piedzīvojums," he said.

Volker's first wife came from Germany, and they had three daughters. But his wife died from breast cancer eight years ago. "It was hard. A difficult time. I stayed here. Everyone was saying, come wieder back to Germany, don't stay here with three little girls. Hooh. I look and think: the girls say it's their home. They were born here. They like it here. I think – I'll remain here," he said.

But now he's re-married and together with Krista they have six girls altogether. 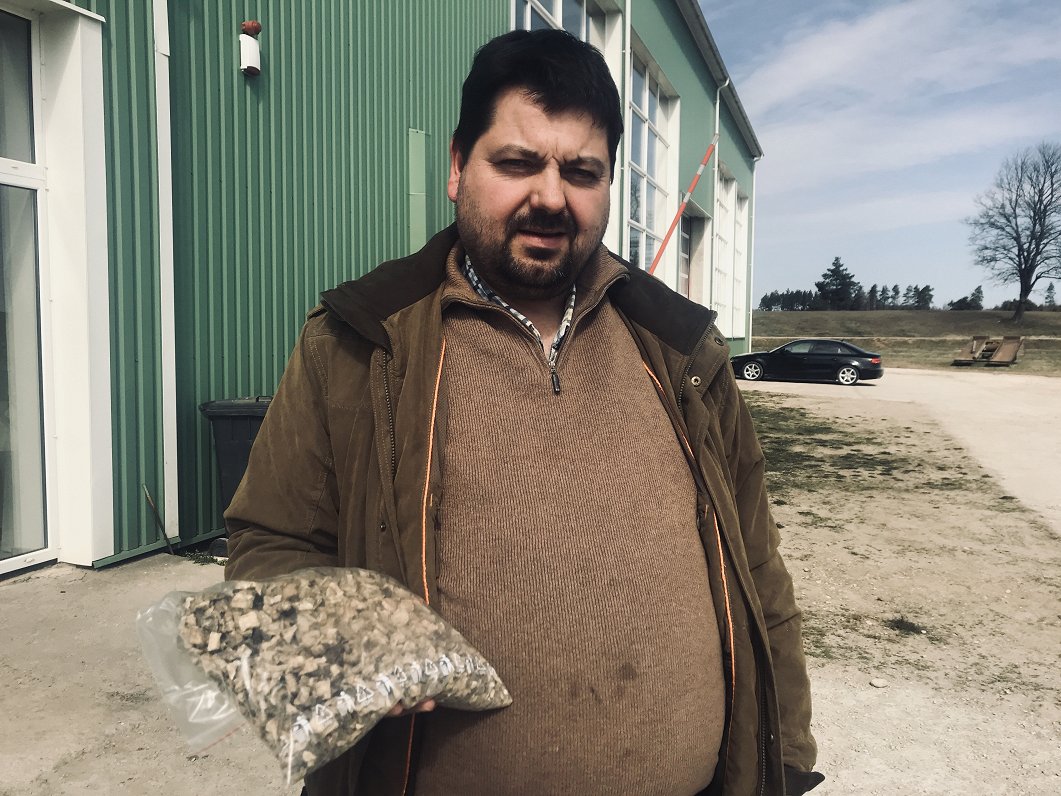 The farm employs fourteen people throughout the year and twenty five in the summer. His farm is the largest employer in the vicinity. "In summer we need many people, but it's difficult in winter. Now we have forest too, we plant new forest, clean and tidy up and cut. And then we need some more workforce for the slow season. It is good," he said.

He has been living here long enough to see the countryside becoming less populated, with empty houses standing where they used to have parties. But he is here to stay and is building a house.

Volker said that while he doesn't speak perfect Latvian, people like that he tries speaking it and that he sometimes has trouble when going to the city and people try to address him in Russian, which he doesn't speak.

He finds Raņķi a good place to be because of the moderate climate. "In summer we go to sea to swim. River Venta goes through Raņķi. Yes, I think this is a cool place," he said.

As he moved here before Latvia joined the EU, he recalls the time he initially had to spend on the border and finds that now there are considerably fewer obstacles to doing business.