june 2, 13:51
Culture
Authors: eng.lsm.lv (Latvian Public Broadcasting), Māra Rozenberga (Latvijas Radio Ziņu dienesta korespondente)
There are new developments in the plan to build the Latvian Museum of Contemporary Art. The project, started in 2014 as a private initiative by patrons Boris and Inara Teterev and the ABLV Bank fund, was halted after the bank folded in the wake of a damning U.S. Treasury report in 2018.

Nevertheless, €4m have been invested in the project thus far, and the project by British architect and artist David Adjaye is ready for construction. Now the patrons want to give the project to the Latvian state, free of charge, in the hope that infrastructure investments during the Covid-19 crisis will help bring the initiative to fruition.

The Latvian Museum of Contemporary Art was part of the "Three Brothers" project of great infrastructure investments proposed by the Latvian state during the economic boom of the early 2000s. Of these, only the National Library of Latvia was actually finished, while projects for a concert hall and the museum were cancelled during the economic downturn.

In late 2014  the Boris and Inara Teterev Foundation teamed up with the ABLV Bank Charity Fund to invest about €30m in the project. A memorandum was signed with the Culture Ministry, which had been partners with ABLV since 2005 in creating a contemporary art collection.

The museum was to be built on a land plot between Hanzas, Skanstes and Pulkveža Brieža streets in Rīga, part of a massive project to develop the Skanste neighborhood.

The UK consultancy firm Malcolm Reading Consultants invited select architects to the project, and in the end Adjaye was selected. In 2016 he told LSM that his project was inspired by Latvia's admirable "timber heritage" and the wooden architecture of districts such as Āgenskalns and the Kalnciema quarter in Rīga, saying  part of the fascination of Latvia is that it "has a picturesque quality but also a robust quality".

Adjaye set to work on the project, but the 2018 ABLV crash made one think the plans for the museum would be nixed once again. Nevertheless, according to Elīna Vikmane, head of the Latvian Museum of Contemporary Art foundation, the project has actually been finished after a €4m investment. The private sector can't finish the project anymore, and talks with the state are being held.

"I can confirm that the project for the Latvian Museum of Contemporary Art has been finished and it's ready for construction. The project itself has been finished and greenlighted at all institutions, it's ready for a construction tender. Patrons have met the Culture Minister and discussed that this perhaps the greatest-ever patron investment could be gifted," said Vikmane.

She said there are several reasons for the initiative to hand the project to the state: the ABLV crash, the death of patron Boriss Teterevs, as well as the current proposals to stimulate the economy with infrastructure investments.

"The goal of this gift is to build a museum. There is no stipulation to this gift other than building the musem!" she said. 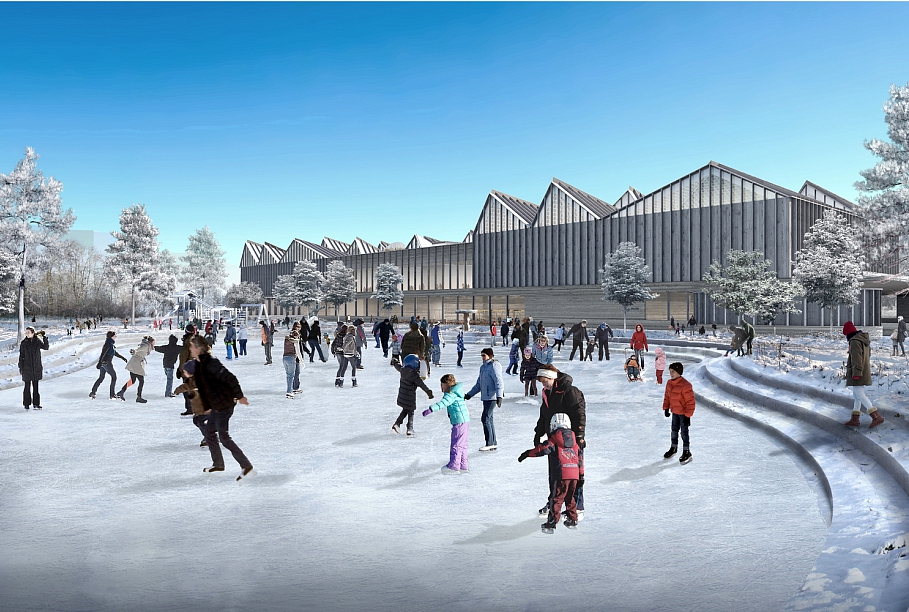 The Culture Ministry has not accepted the offer yet. The minister's spokeswoman Inga Vasiļjeva said that while the ministry highly welcomes a gift of such magnitude, there's still a lot of fine print to go through.

"This project by world-renowned architect David Adjaye has been made for a specific location in the city, and it's clear it must be carried out on the plot of land that was meant for it originally.

"We are currently in the early stages of talks with the foundation. We have received a letter of intent to gift the project, and we've had our first meeting with the patrons. The Culture Ministry hopes that the land will be part of the gift. This will be the main topic of discussion in talks with the Latvian Museum of Contemporary Art foundation," said Vasiļjeva.

The land earmarked for the museum belongs to Pillar grupa, related to ABLV Bank. According to Elīna Vikmane, head of the foundation, the foundation doesn't intend to keep the land.

"We know that the state has had ill-fated experiences and that construction cannot happen if the land and the building belong to separate owners. It follows that we realize it's unacceptable," said Vikmane.

According to an estimate commissioned by the fund, the building could cost about €43 million.

Astrīda Rogule, the head of the contemporary art collection in the Latvian National Art Museum, says that the state should indeed assume further responsibility for the project.

"The private [sector] can order the music, but a state has a cultural policy. A museum is an instrument of culture policy. I think we shouldn't make the same mistake twice and turn down another star architect, as it happened with Rem Koolhaas' [project proposed in the mid-2000s]. [..] Of course it puts on obligations on the state, but I think the state has duties toward its citizens [..] to ensure a full-scale cultural education and life experience. As modern art reflects our way of life."

Currently the future of the project depends on the talks. The Culture Ministry thinks that both a modern art museum and a new modern concert hall should be built.