What to know about the German occupation of Vidzeme in 1918

february 28, 2018, 17:10
History
Authors: Jānis Šiliņš (Historian)
On February 28, 1918 the German forces took Gulbene, which housed the headquarters of the Russian 1st Army. This meant all of Latvia's territory was occupied by German forces, a state of affairs that would last for the next nine months.

On February 18, the German army took Daugavpils and moved northeast in the direction of Pskov. Small but highly mobile units of German forces penetrated deep behind enemy lines.

They attacked places lying by the greatest roads and railroads and did not meet organized resistance. There was only scattered and very local resistance by the Red Army, Latvian Riflemen and Russian soliders. 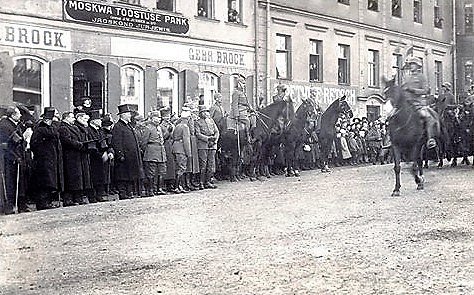 The German army encountered fierce resistance only by Pskov and Narva, where they encountered what had remained of several regiments of Latvian Riflemen, aided by Soviet forces who had rushed from Petrograd to help them. However they were unable to fend off the rather small German attack, and Pskov was taken after a few days, making the Reds retreat further, to Petrograd.

On February 24 the government of Soviet Russia all but capitulated, submitting to all the peace conditions of the Germans. Narva was taken by them on March 3. The Germans' gains and losses

Their losses were minuscule despite that a low number of forces was involved from the get go. 20 soldiers were killed and 89 wounded. This was a tiny price to pay to force Russia accept the Treaty of Brest-Litovsk, which was very unfavorable to them. The memories of rifleman Jānis Stūre

The Soviet retreat from Vidzeme was chaotic and uncoordinated. The haphazard events are illustrated by the memoirs of Jānis Stūre, a rifleman in Vidzeme, about the events of February 1918.

"The retreating groups looted the farmers' homes. [..] Farmers fled into the forest with livestock and valuables. The Germans were following quickly, and this reduced the robberies and other acts of violence. [..]

We entered Valka at about noon. The town seems abandoned. Shutters are closed, the doors and gates are locked.

There was almost not a soul to see. [..] The groups that had remained in Valka to rest - that is, to plunder - were running away now."

During the retreat from Valka, the soldiers blew up the water tower and the artillery warehouse. Later on, the riflemen unit retreated to Russia.

"Soon we arrived at a column of abandoned heavy and light vehicles that stretched for two versts (about 2 kilometers). They were stuck in the snow. It's hard to imagine what happened there.

The farmers from the surrounding villages had come there in great numbers. They looted, robbed, broke and lacerated whatever they could. They took out the seats and upholstery, the roof covers and other accessories from the cars.

There were drivers among them, who knew what each of the parts was for, and they took what was most valuable and most easily taken off. They sold it later for a hefty profit.

I asked one of the farmers, 'What's the use of a heavy duty tire to you?'

The answer: 'Everyone's taking what they can. Why shouldn't I?'"