march 8, 2019, 11:17
Economy
Authors: eng.lsm.lv (Latvian Public Broadcasting)
Latvian Finance Minister Jānis Reirs on March 8 followed the now well-established tradition of delivering the proposed state budget to Saeima in a slightly beaten-up briefcase. He posed for photos on the Saeima steps before handing on the bag to Saeima speaker Ināra Mūrniece. 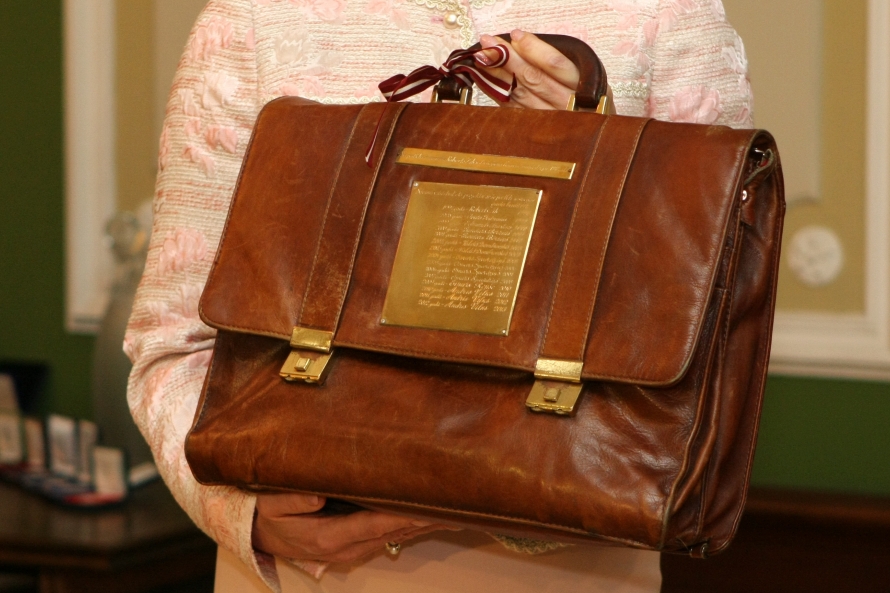 Carrying a budget portfolio from the Ministry of Finance to the Saeima is a tradition started in 1997 by then-Finance Minister Robert Zīle. The briefcase is the same one Zīle used back then - hence its well-worn appearance.

A brass plate on the bag recorded the names of each Finance Minister making use of it and the years in which they delivered a budget to Saeima, though this was recently replaced with a new one as the first was full up (it can now be seen fixed on the back of the bag, giving it a rather bulletproof look).

A similar tradition takes place in the United Kingdom when the Chancellor of the Exchequer (the UK Finance Minister) delivers a budget to the Houses of Parliament.

The bag has seen plenty of changes over the years through boom and bust. In the first year it was delivered to the Saeima, the amount of expenditure it contained was a mere 1.3 billion lats or about 1.8 billion euros. In contrast the 2019 budget expenditure is 9.4 billion euros.

When it arrives at Saeima it typically weighs in at 3 to 5 kilos, depending upon the amount of paperwork inside.

The current Minister, Janis Reirs, will be carrying the portfolio for the fourth time, matching Finance Ministers Oskars Spurdzins and Andris Vilks who have also toted the bag four times each.

Only one Finance Minister has abandoned the bag on its annual outing - in 2008 Atis Slakteris was abroad when the budget was delivered. The bag never forgave him for the snub.

As previously reported by LSM, the state budget has been delayed by the protracted coalition formation talks following October's parliamentary elections with a placeholder budget in operation during the first months of the year.

The defense sector is allocated 60 million euros more than last year, to maintain Latvia's defense spending at the NATO-recommended level of at least 2% of GDP.

There is also 7.2 million euros earmarked to be used for the implementation of the Action Plan for the Prevention of Money Laundering and Terrorist Financing (Moneyval).

Now the important business of getting it approved by Saeima is center stage. Deputies will need to be given sufficient time to work through the budget plan in committee, after which the budget debate will be scheduled. This usually involves a lengthy discussion, but given that we are already well into 2019 and the government has generally avoided controversial measures, it is possible this time around it could prove more expeditious than usual.

"We plan work so that the Saeima will adopt the budget as soon as possible," said Reirs, describing the proposals as a "technical budget" that should not raise serious objections.

The date for the budget debate has yet to be announced by the Saeima presidium, but Mārtiņš Bondars, Chairman of the Budget and Finance (Tax) Committee of the Saeima told journalists that it is the duty of Saeima members to adopt this year's state budget as soon as possible. Consequently, the Saeima Budget Committee has committed to work on it all day on 18 and 19 March before handing it on for debate.