may 17, 2019, 10:49
President
Authors: eng.lsm.lv (Latvian Public Broadcasting)
As the three candidates to become Latvia's next state president were named officially May 14, LSM presents you with a brief look into the candidates' biographies.

We conclude with the background of Egils Levits, widely regarded as the favorite to secure Rīga Castle as his workplace for the next four years.

Egils Levits was born in Rīga on June 30, 1955. In 1972 his family emigrated to West Germany and it was there that he graduated in law and political science from the University of Hamburg.

In the late 1980s Levits became active in the movement working towards the return of Latvia's independence, having a hand in drafting the legal documents that were important for establishing the continuity of the suppressed state. He was a member of the Latvian People's Front Council and a member of the Latvian Civil Congress of 1989. He was one of the authors of the Declaration of the Supreme Council of the Latvian SSR on Restoration of the Independence of the Republic of Latvia on May 4, 1990.

In 1993 was elected a Saeima deputy from the list of the party "Latvian Way" and was briefly Vice Prime Minister, Minister for Justice, and acting Minister for Foreign Affairs (1993-4) during the short-lived government of Prime Minister Valdis Birkavs.

Following Birkavs' resignation, Levits was ideally placed to become Ambassador to Germany and Switzerland (1992-93), then Austria, Switzerland and Hungary (1994-95) before deciding to switch his diplomatic and political careers for a return to the legal world. 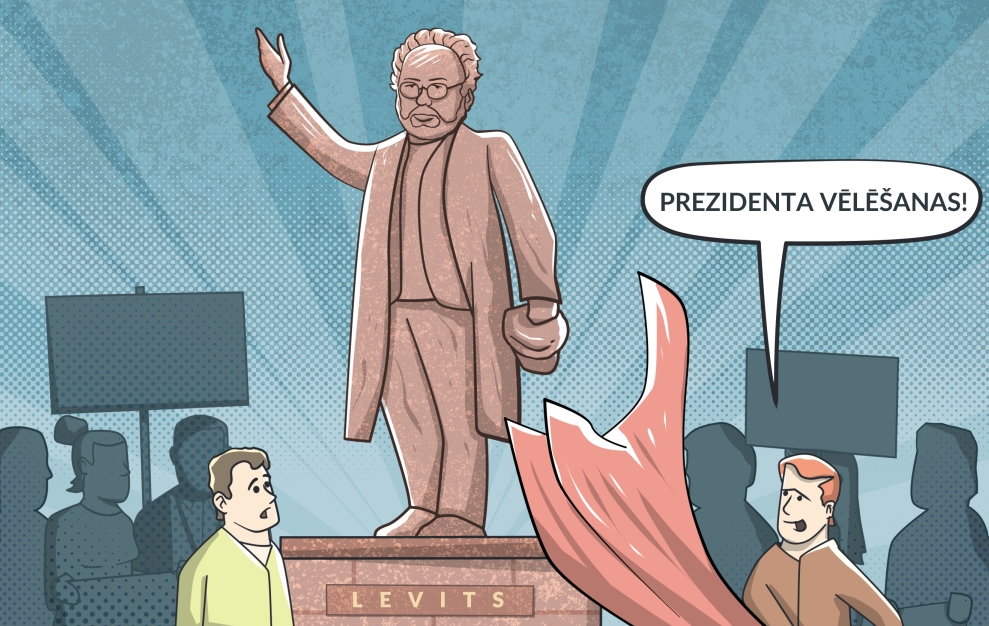 However, he has maintained a political profile throughout. Levits has repeatedly been mentioned as a possible president, the first time in 2007 during the premiership of Indulis Emsis, the prime minister who eventually resigned over a scandal concerning a waiter, a tractor and a briefcase full of cash.

Levits has avoided any such major scandals over the course of his career, with perhaps his most controversial act being his role in drafting a Preamble to the Constitution of Latvia. This was criticized in some quarters for being either unnecessary and/or referencing "Christian values" in a document attached to a secular constitution. Nevertheless, the Preamble further endeared Levits to conservative and nationalist politicians who have been the most vocal in promoting his candidacy for the presidency.

He was named a presidential candidate by the right-of-center National Alliance grouping in 2011 and 2015, coming second to minister of defense Raimonds Vējonis  in 2015. On that day Levits had high hopes of winning, but the secret ballot system then in operation very likely contributed to dashing his hopes. The presidential vote in Saeima this time around will be by means of an open ballot, which should further enhance his already strong chance of finally securing the presidency.

In a 2017 interview he said he saw three main problems in Latvia at the moment: first, the gap between rich and poor, second, the fact that a large part of the population continues to live in a "foreign information space" and third, corruption and corporate intrigues. In the same interview he declared:

"The President is a public official whose main task is to unite and inspire."

Earlier this year he published an extremely hefty 848-page tome of collected writings titled Valstsgriba. Idejas un domas Latvijai 1985-2018 (A Country's Will: Ideas and thoughts for Latvia 1985-2018). It was published by the state-owned official Latvian gazette rather than a regular commercial publishing house, which raised some eyebrows and questions about whether it might be interpreted as official endorsement for a presidential election campaign.

According to his own account, in 2015 he owned two land plots in Marupe, two land plots and a house in Engure, and apartments in Rīga and Cēsis. Since he is not a Latvian official and does not submit a declaration, his current financial affairs are unknown. However, in 2016, he was reportedly among the best paid European Union officials, with an annual wage of around 270,000 euros.

Levits is married. His wife, Andra, works as a hospital gynaecologist, and they have an adult son and daughter.

With the parliamentary vote to choose a new president due on May 29, Egils Levits is the clear favorite. Four of the five parties in the ruling coalition have voiced their intention to support him, and current estimates suggest he should be able to count on around 55 votes from the 100 Saeima deputies - the same number Vējonis secured to defeat him last time. 51 votes are required to become President.