Launching proceedings was President Egils Levits. After some ruminations on his favorite subject - the constitution - he turned his attention to the 100 Saeima deputies.

Politicians can easily fall victim to the temptations of populism and short-termism due to pressure from media and particularly social media, he said, while urging them to do otherwise.

"Parliamentary democracy must be strong, capable of responding to today's challenges and demonstrating its effectiveness and efficiency. Therefore, I would like to ask for support and encouragement for any initiative aimed at strengthening the Saeima and improving its quality." 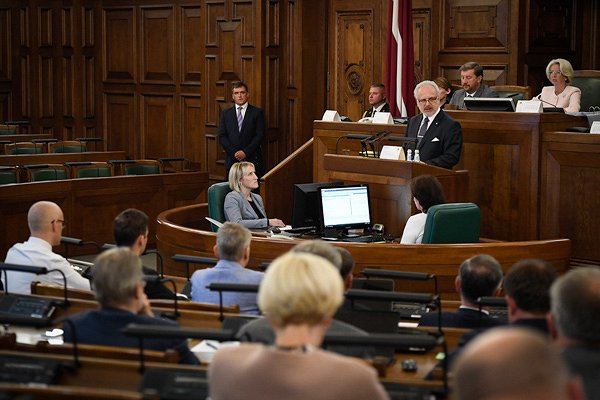 The President also indicated his willingness to get hands on and use his right as President to ''raise issues of national importance" for discussion in parliament which he hoped would be solved by the end of the next Spring session of parliament.

Specifically he identified financial support for public service media (which includes LSM), as a priority, saying "Rapid progress must be made with the adoption of a new, dedicated Public Media Law to ensure transparent and good governance of public media,"

Third, the Saeima and the government "must jointly seek solutions for the development of higher education and science. We need to be able to create an excellent and forward-looking system of higher education that fosters science, innovation and the economy," said the President.

Item number four on his to-do list was finding "solutions to combat economic crime" and in particular improving procedural laws so that court cases can move much faster than at present, when cases can take years to make their way through the legal system,

Finally, Levits returned to constitutional matters and an idea he has repeatedly floated in the past: the possible creation of an independent state council "to support and strengthen the Saeima in its legislative work, in order to ensure the quality of laws required by the people of Latvia today and to focus legislation on the sustainability of the state."

"Serious consideration" should be given to establishing such a body, Levits said, adding that it could "bring new, modern levels of quality directly into the legislative process."

He left parliamentarians with a broad hint that he would like to see a budget in place before the November 18 independence day holiday before leaving them to get on with the 33 items on the first day's agenda.