Latvian central bank governor to be charged with taking bribe

Bank of Latvia president Ilmārs Rimšēvičs is being charged with taking a bribe and businessman Māris Martinsons is accused of assisting bribery in the same case, related to financial institution Trasta komercbanka, which had its license to operate pulled by financial regulators, the Prosecutor General's office told the press June 28, reported LTV.

The offence carries a prison term of three to ten years under the law. Una Reķe, the spokeswoman for the Prosecutor General’s Office, said that the prosecution will provide more details of its case June 29.

Rimšēvičs has until this point denied any wrongdoing and the Prosecutor General's office repeated that under Latvian law a presumption of innocence applies until proven otherwise.

Martinsons' lawyer Didzis Vilemsons confirmed to LTV that his client has been charged in the same case as Rimšēvičs.

On June 18 the Latvian Corruption Prevention Bureau (KNAB) asked to prosecute Rimšēvics and Martinsons. The bureau uncharacteristically shared the news coupled with an enigmatic infographic. 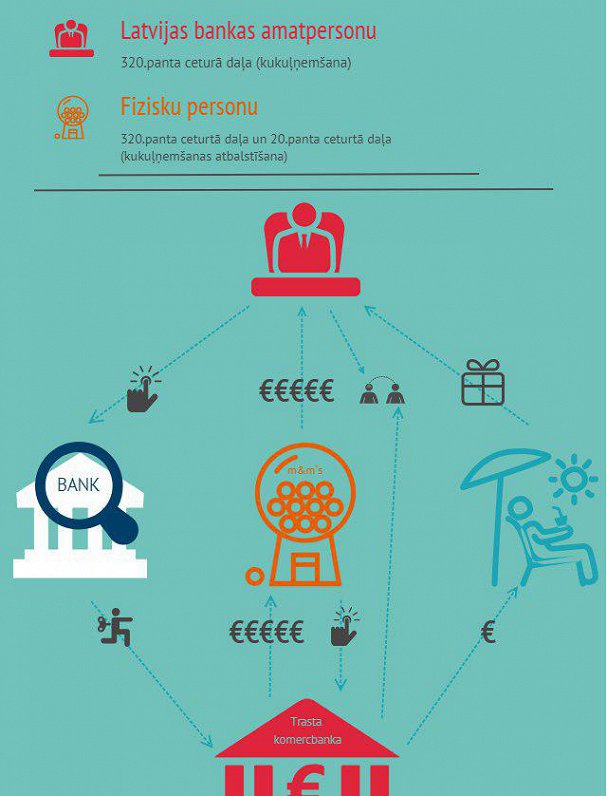 Latvian Television earlier reported that the infographic testifies to suspicion, on the part of KNAB, that the central banker used his influence to put pressure on Latvia's financial regulator, the Financial and Capital Markets Commission (FKTK), to influence decisions it took regarding Trasta Komercbanka, which had its licence pulled in 2016.

No FKTK officials have been named in the case as yet. Regulation of the financial markets is supposed to be carried out independently by FKTK without interference from the central bank, so if it was proven that FKTK was having its strings pulled by Rimšēvičs, it would represent a serious breach.

Meanwhile Martinsons, according to LTV's interpretation of the graphic, used his influence to broker between Trasta and Rimšēvičs, to whom Martinsons possibly delivered cash. KNAB did not reveal the sum of the bribe, but it is greater than €100,000.

Another episode is related to a vacation, allegedly paid on Rimšēvičs' behalf by Trasta. According to KNAB, Trasta covered the expenses of a trip that took Rimšēvičs on a well-publicised fishing trip to Kamchatka in the far east of the Russian Federation.

According to Latvian Television, former Trasta co-owner Igors Buimisters and former board member Viktors Ziemelis are also involved the case.

(The story will be updated.)