Only 29% of Latvians will take first chance to get a Covid jab, survey says

Only 29% of Latvia's population plan to use the first chance to get vaccinated against Covid-19, according to a survey of residents conducted by the research company SKDS, newswire LETA said March 4.

29% of Latvia's population plan to use the first chance to vaccinate against Covid-19, whereas 36% of respondents indicated that while they intend to be vaccinated, they still want to wait.

21% of those surveyed have indicated they are reluctant to be vaccinated, but believe others can do as they wish. A relatively small number of respondents - 9% - are strongly opposed to vaccination and have expressed the view that others should not be vaccinated either, according to the survey.

Only 5% of those surveyed said it was difficult to answer. 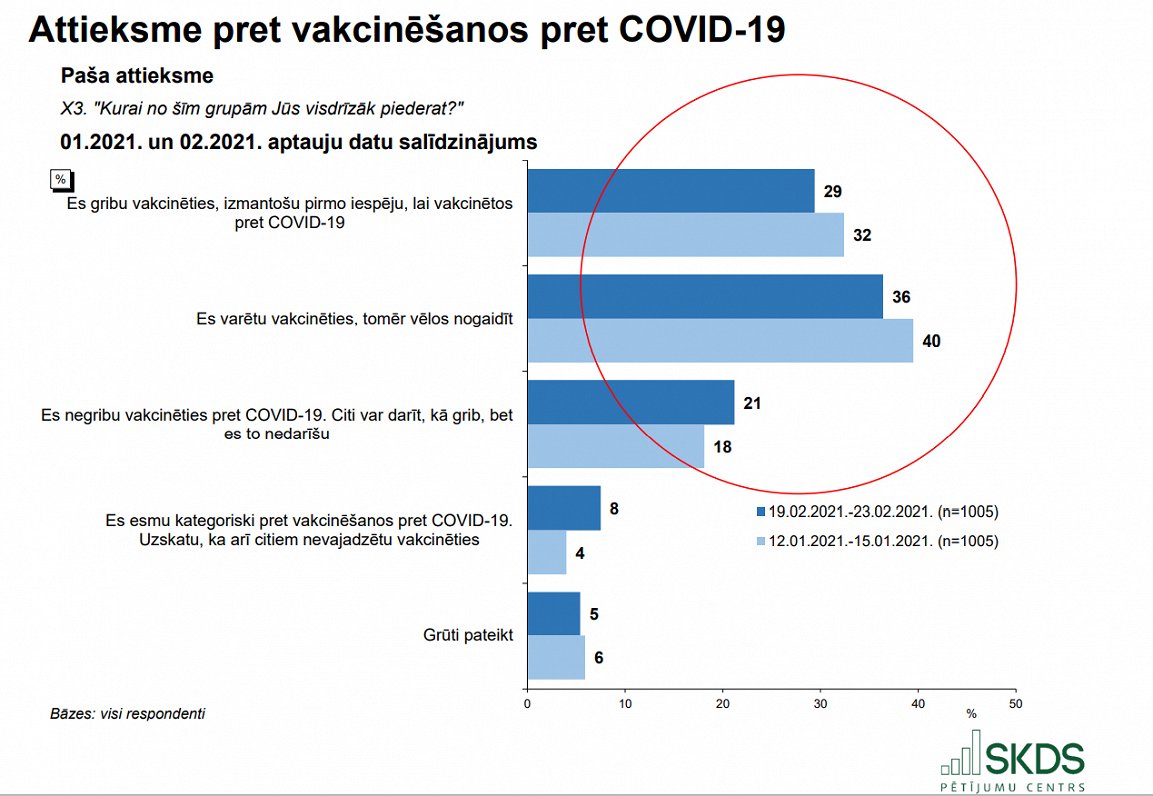 In this survey, the number of respondents planning to use the first chance of being vaccinated against Covid-19 decreased by 3% compared to the period from January 12 to January 15, when 32% of respondents said they would do so.

Over that period, the number of respondents categorically opposed to vaccination who think that others should not get it increased: from January 12 to January 15, 4% of the population responded this way and 9% of the population chose the response now.

23% of Latvian residents would like to choose a vaccine against Covid-19.

20% of respondents indicated that they would only be vaccinated if they were able to choose a specific vaccine against the virus. 28% of respondents said they did not want any vaccines against Covid-19.

47% of the population responded that the country of production was essential.

When analyzing data on reasons that discourage respondents from vaccinating against Covid-19, 62% mention they want to see how the vaccine works, what its side effects are.  The same number of respondents pointed out that the vaccines offered were under-tested. Meanwhile, 37% of those surveyed want more information on vaccines.

10% of respondents believe that a high-quality vaccination process cannot be achieved, 9% have indicated that they are not advised to vaccinate because of their health state. On the other hand, 8% believe that they do not need to be vaccinated and that there is a very low risk of being in contact with an infected person.

The public is increasingly critical of the information provided by the government in the Covid-19 crisis, according to the survey.

65% of respondents say they are tired of the Covid-19 news, which increased by nine percentage points compared to the January survey.

42%, on the other hand, say they no longer know what to believe. In January, 33% of respondents said so.