The life and times of Latvian star singer Nora Bumbiere

On the occasion, LSM presents a brief look on the life and works of this era-defining singer, who saw her heyday in the 1970s. As part of the star duo with Viktors Lapčenoks, Nora Bumbiere gripped a generation of Latvians under the spell of her vivacious charm and grit, evident throughout her life and career.

Nora Bumbiere was born on March 13 in the Eleja municipality, central Latvia. Nora was the second daughter of a chauffeur and an employee at a milk kitchen. She and Dace, her older sister, were later joined by Māra Zustrupa, the third girl in the family. 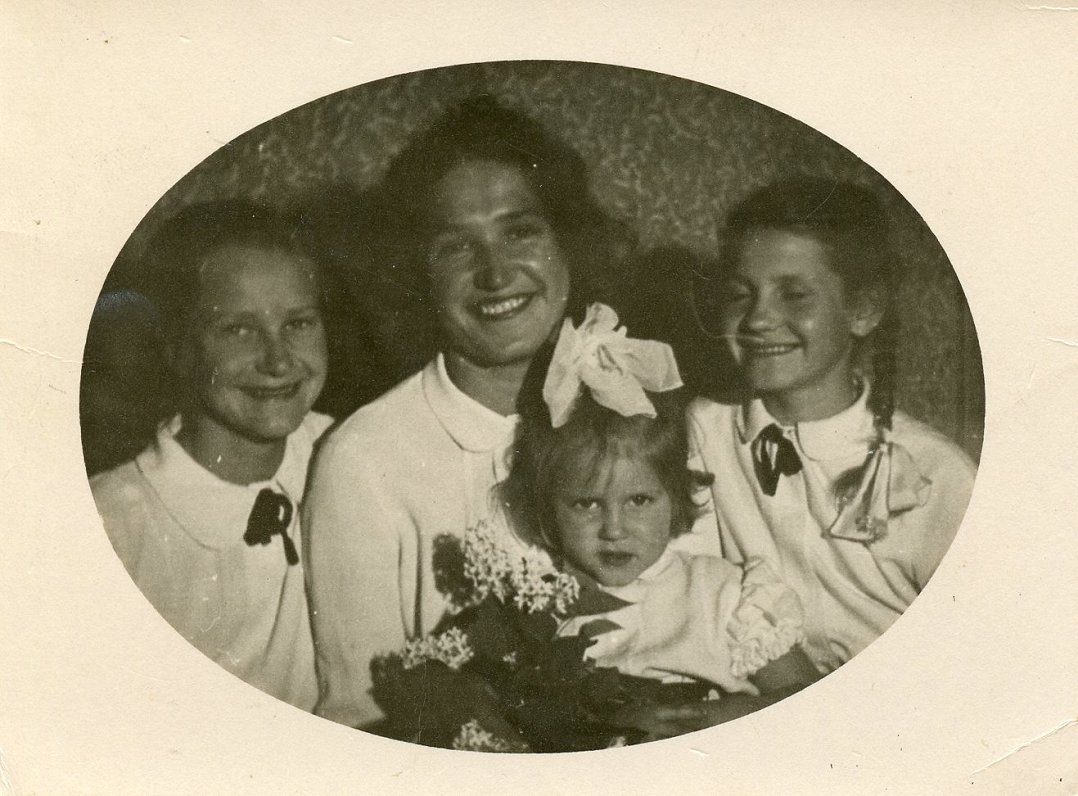 (Nora's mother with her three daughters. Photo from the archives of Māra Zustrupa, Nora's sister.)

In the early 50s, her family moved to the nearby Jelgava town, where she studied at the Jelgava 1st Secondary School. She sang in different amateur orchestras and perfected her voice at the Jelgava Music School.

After becoming pregnant at the age of 17, she gave birth to her first son Romualds. Nora had immediately been expelled from school when it became evident she was with child. The father, Edgars Skroderis, was a notorious local libertine. He already had a family and was unwilling to part with it.

Nora was forced to study at night school and took up work decorating ceramics at a national factory. 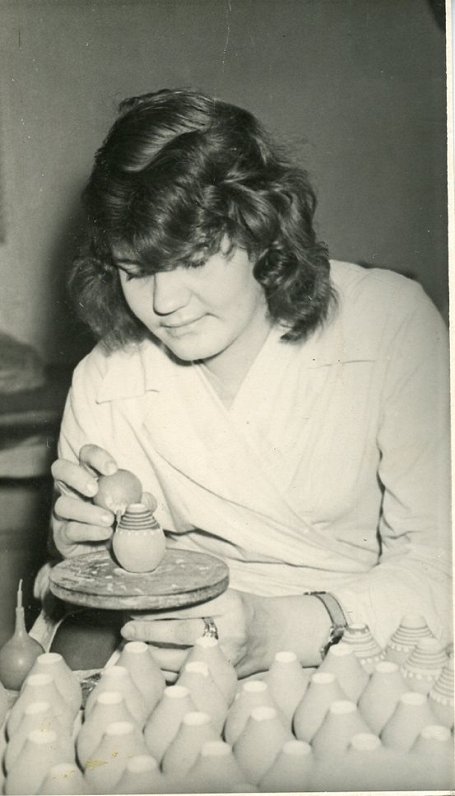 (Nora at work at the ceramics factory. Photo from the archives of Māra Zustrupa.)

That same year, her lucky break happened. None other than maestro Raimonds Pauls noticed the pretty dark-haired alto with a gentle yet crystal-clear voice during a "tariffication" screening of state orchestras. Nora was the standout of Jelgava's ensemble, Jaunība (Youth).

Thus, at the age of 18 she was welcomed to Pauls' Rīgas Estrādes Orķestris. In 1970, her first solo part appeared in the song, Papu, saki mammai pats!, which was a duo with Ojārs Grīnbergs (listen to a later recording with Viktors Lapčenoks below).

Before she was launched into stardom proper, tragedy struck her family. Nora's older sister, Dace, was killed by her brother-in-law in 1969 during a bout of drinking.
Love on the stage
Two years later, Pauls introduced Nora to her stage partner and soon-to-be-husband Viktors Lapčenoks. She moved in with him in 1972, and the couple married the year after.
Neither could read sheet music, so both of them had to work hard on their repertoire. To this end, they recorded their rehearsals on tape and improved upon the recordings at home. Nora proved to have a formidable musical memory, and it is assumed she had perfect pitch. 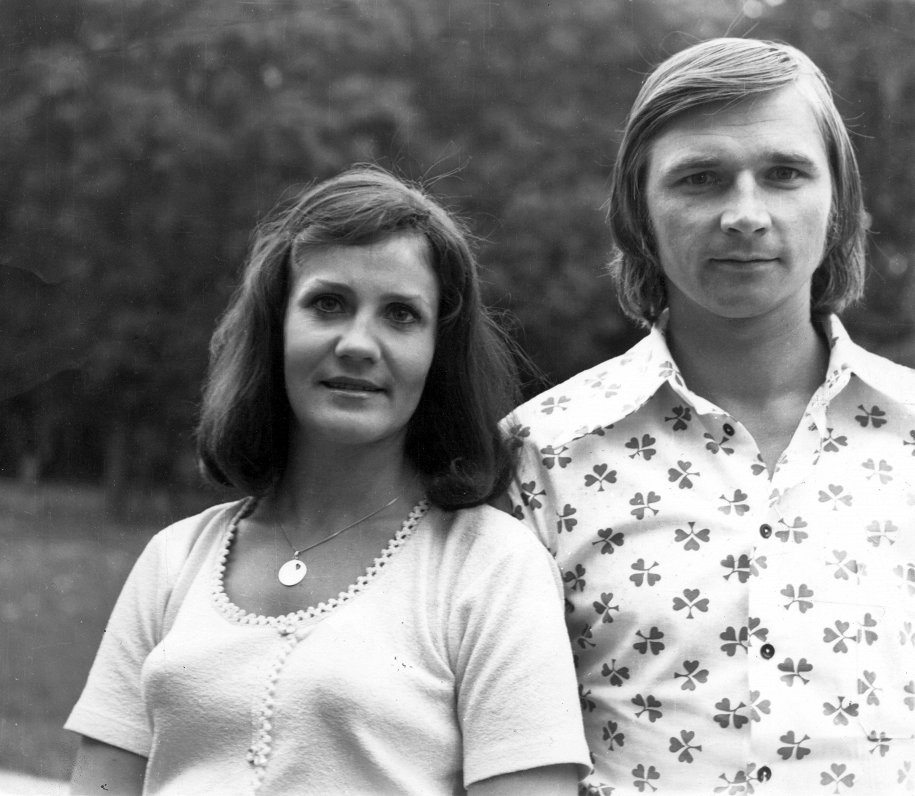 (Nora with her husband Victors Lapčenoks. Photo from the archives of Māra Zustrupa.)
After a shaky start, the dynamic duo--the most popular star couple in Latvian history--joined Pauls' ensemble, titled Modo, in 1973 as the main solo artists. The ensemble released numerous vinyls and toured constantly, with up to 30 performances per month. They soon started receiving astonishing numbers of accolades at the annual Mikrofons song contest.
Before the duo's heyday was to come, however, notable composer Imants Kalniņš managed to squeeze a song of his into Nora's repertoire. It was the classic Dūdieviņš (1970) with lyrics by Vizma Belševica. The song is a veritable tour de force of 20th-century Latvian culture.

Nora and her husband dominated the Mikrofons song contest in 1975, receiving the first four accolades for their performances of pieces by Zigmars Liepiņš and Raimonds Pauls. Liepiņš' Ķiršu lietus (A rain of cherries) took first place.

During the height of her fame, Nora was an absolute public darling but nevertheless found time to devote to various pursuits, including knitting, interior design and cooking.

Her multifarious talents are evident by the fact that, in addition to having bequeathed a recipe of a "Saturday apple pie" to the public, she also designed the stage attire for her and her husband (pictures). Her designs are now on display at the Ģederts Eliass museum in Jelgava.

"A creative person must be truly creative in their family life, their work, their home and upon meeting colleagues and friends," she famously said.

As a celebrity, Nora could enjoy some privilege not accorded to her fellow Soviet citizens.

She and Lapčenoks shared a modest apartment in the Purvciems working-class neighborhood, but unlike most people they had a state-of-the-art color TV set. Nora was also, for example, able to make excellent meatballs as she received advance notice of upcoming deliveries to the nearby meat market.

By way of what was known as the blats system (knowing and/or bribing the right people), Nora was also able to procure top-notch cloth for her stage setup from the local textile shop.

After increasing disagreement within Rīgas Estrādes Orķestris, Nora left the ensemble in 1978. In an expression of solidarity, Lapčenoks left soon after, but returned three months later after realizing the pair had neither a career, nor a domestic life to speak of anymore. The pair separated in 1980.

Late in life: Subsequent marriages and eclipse of fame

Nora Bumbiere's career was never the same without Raimonds Pauls and Viktors Lapčenoks; she nevertheless continued to perform across Latvia with different musicians and ensembles, notably with singer Žoržs Siksna.

Immediately after her divorce from Lapčenoks, Nora married guitar player Valērijs Beļinovs. Her second child, Georgs, was born in 1981. Beļinovs left Latvia in 1982 but the two divorced formally only in 1987. She then married stage worker Arsens Suleimanovs and gave birth to her daughter Beatrise in 1990.

Her last marriage was overshadowed by her husband's affair with the nurse of their child. She died in 1994, at the age of 47, after contracting hepatitis C. She had been scheduled for a kidney transplant which was cancelled at the last minute.

Thousands attended her funeral, held in Jelgava, which houses a monument to the fame of the great artist. 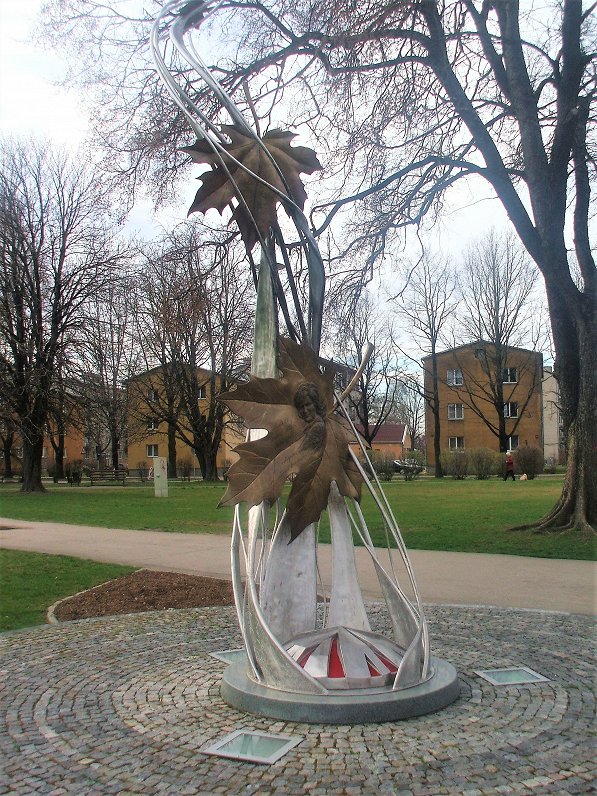 (This story is based on a series of pieces about Nora Bumbiere appearing on LSM's Latvian-language service, written by Madara Rudzīte and Ilze Jansone.)
Seen a mistake?