As previously reported by LSM, the National Alliance's secretary general, Raivis Zeltīts, was revealed recently to have been the user of a far-right message board called Iron March, on which he exchanged views in 2012 with site administrator Benjamin Raymond, a British far-right activist and founder of an organization called National Action, which British Home Secretary Amber Rudd banned, describing it as: “a racist, anti-Semitic and homophobic organisation which stirs up hatred, glorifies violence and promotes a vile ideology."

Zeltīts subsequently apologised to his party for the "cloud" the revelations of his far-right connections had caused. He told De Facto that the forum to which he posted message originally contained "various people with various views" and that when it headed in a clearly neo-Nazi direction he stopped using it.

But De Facto journalist Olga Dragileva, helped by British journalist Colin Cortbus, have uncovered fresh revelations that make the links between the National Alliance and National Action appear to be more substantial than long-distance discussions conducted on the Internet.

According to De Facto, at the end of 2014, Zeltīts - already Secretary General of the National Alliance at the time - appeared on an online radio show called "Voice of Albion" presented by National Action supporter Paul Hickman in which Hickman decries the "Jewish Bolshevik elite". The broadcast is still available online on far-right websites.

At one point Hickman says: "Well, the German elite seems to have made a fine country of Latvia - strong people, well educated, nice buildings, this kind of thing..." to which Zeltīts replies: "Yes, I think now we only start to understand the positive influence. It was a negative national myth, I think, to blame Germans for these crusades, for oppression. If you look at it more objectively they had, I think, a great role in the whole region and if it wasn't for them, we would be part of another civilization."

Later the pair discussed the National Alliance's future election strategy with Zeltīts suggesting that while it might be "more logical" for the party's then-sole MEP, Roberts Zīle, to cooperate with the French Front National in the European Parliament, rather than the more moderate European Conservatives and Reformists, the fact that the Front National takes money from Vladimir Putin makes that problematic.

However, it is also worth noting that during the conversation Zeltīts avoided Hickman's attempts to persuade him to air anti-Semitic sentiments.

A few months later in March 2015, both Hickman and Raymond visited Latvia, as shown by a picture Raymond posted online showing him inside the National Alliance's Rīga headquarters and boasting of the contacts he had made. 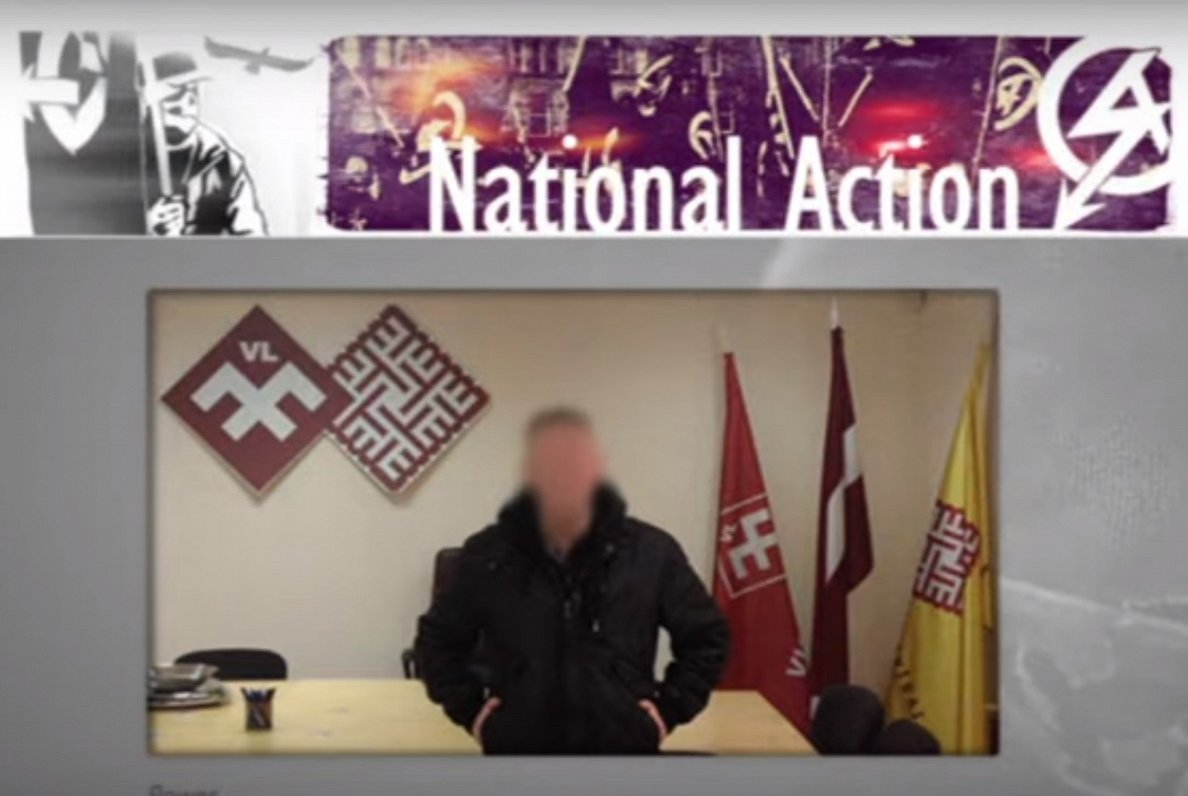 Yet despite pictures showing Zeltīts and Raymond standing shoulder to shoulder at the controversial March 16 procession (see video clip above) which commemorates members of the Latvian Legion, combat divisions of the Waffen-SS, Zeltīts maintained to LTV that he did not invite the British neo-Nazis to Latvia, nor was he the one who gave Raymond a tour of the party office. He admitted he did know the identity of the person who invited them, but had "ethical reasons" why he was not prepared to divulge this information.

Hickman, a former organizer for another British far-right group, the British National Party
(BNP) was later found dead just days before he was due to appear in court on race hate charges. He and National Action have also been linked to another Baltic nationalist activist at the EKRE party in Estonia, which like the National Alliance is part of a ruling coalition government.

Asked about the links to the terrorist group National Action, leading politicians within the National Alliance displayed a marked reluctance to answer De Facto's questions. Party leader Raivis Dzintars said that he had accepted Zeltīts' apology for the messages he had posted online but that the subsequent information turned up by De Facto was "not relevant" to anyone else.