Signing of the Latvian-Soviet peace treaty on August 11, 1920
Photo: Vikipēdija

september 11, 2019, 13:06
History
Authors: eng.lsm.lv (Latvian Public Broadcasting), Jānis Šiliņš (Historian)
A hundred years ago, on September 11, 1919 the Latvian government received a telegram from Georgy Chicherin, People's Commissar for Foreign Affairs in the Soviet government, with an offer to conclude a peace treaty. Such offers were sent to the Lithuanian and Finnish governments as well, while Estonia had received such an offer as early as August 31.

Soviet Russia had not officially gone to war against any of the Baltic states. Parts of the Red Army had been chased away from Estonian and Lithuanian territory, but were still active in Latgale, eastern Latvia. In September 1919, the government of the Latvian SSR was still active, but the offer of peace came from Moscow as opposed to the town of Rēzekne.

The Latvian Soviet government was circumvented, and as such the Soviet Commissar for Foreign Affairs admitted, albeit indirectly, that the Red Army's invasion into the Baltics, despite being masked as a local workers' revolution and civil war, was outside interference into Baltic affairs.

There were several reasons why Soviet Russia suddenly came out with the offer. In late August, Anton Denikin's (White) army made significant advances in Ukraine and Southern Russia, while General Yudenich's army near Petrograd was also getting ready for a new offensive. The Soviet side was ready to do whatever it could to destroy a common anti-Bolshevik front and isolate White generals from outside support. They were also worried about the activities of the Polish army and its possible cooperation with Lithuania and Latvia in fighting Soviet Russia. Right after receiving Chicherin's reply, on September 11–12, 1919 a meeting was held between the representatives of the Latvian, Estonian and Lithuanian governments. It was decided that the three Baltic countries should cooperate and that there shouldn't be separate peace treaties with Russia. In order to discuss peace terms and coordinate activities, a conference between the PMs and foreign ministers of the three countries was held in Tallinn on 14–15 September, 1919.

It is evident that the Baltic countries wanted to initiate peace talks with Soviet Russia as soon as possible.

In the case of Latvia, the urge to make peace was increased by the activities of Pavel Bermondt-Avalov's army in Jelgava.

The army could attack Rīga at any moment, and to fend them off the Latvian Army forces fighting the Red Army in Latgale would have been of great assistance. There were also hopes that the peace treaty would help regain Latgale without any blood being spilled. It was likewise very important that Chicherin's offer meant Soviet Russia was ready to recognize Baltic independence, a contested point among Russian White emigre diplomats. Their dissent was among the chief reasons why Baltic representatives were unable to gain international recognition from the Entente countries in the Paris conference. 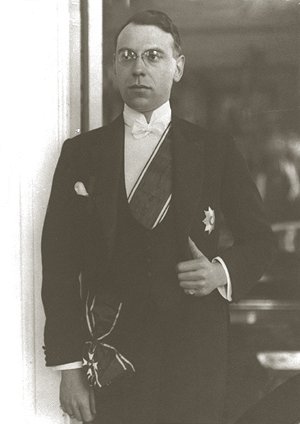 The Entente and Bermondt against peace

Latvia was pressured by the Entente countries not to conclude peace with Soviet Russia. The situation was made particularly complex as it was necessary to fight Bermondt's army, and the British and French navies partook in the battles as well.

During the Bermondt affair – in which German and Russian troops, assembled under the adventurous Colonel Pavel Bermondt-Avalov with the ostensible goal to fight the Red Army, tried to take the Latvian capital – it was impossible to conclude the peace treaty, which was eventually achieved only on August 11, 1920.

Bermondt was among the chief critics of peace talks, which served as a pretext to accuse Estonian and Latvian governments of Bolshevism or the collaboration with them. Alongside political considerations, he was also wary that the military situation would escalate, as a Latvian offensive against Bermondt's army in Kurzeme was expected after an agreement was concluded with Soviet Russia. In Jelgava, rumor spread among Russian and German officers that Estonia was in the process of relocating several divisions from the Soviet front to Rīga. It is possible that these rumors precipitated the Bermondtian attack on Rīga in early October, 1919.