january 2, 2018, 17:11
Banks
Authors: eng.lsm.lv (Latvian Public Broadcasting)
Moldova's national bank on December 21 released a second report into a billion-dollar fraud that caused a national crisis and appears to have involved more than one Latvian bank as a conduit for money-laundering.

As previously reported on numerous occasions by LSM, Latvian boutique banks specialising in non-resident clients were alleged in a report by the Kroll and Steptoe and Johnson financial forensic company to have played a role in the massive scam.

Now a second report released and published on the official web page of the Moldovan national bank gives more details on how the scheme operated.

"Two Latvian banks received the majority of the proceeds of the suspected fraudulent loans," the report says.

"Kroll has progressed the tracing of loan proceeds issued to Shor Group companies by the Three Moldovan Banks. The Scoping Phase report identified that the majority of the funds were transferred to accounts at Latvian banks and that a proportion of the funds appeared to be used to repay existing loan balances, having been passed through Latvian accounts and having been transferred back to Moldova. NBM has provided significant disclosure, which has been supplemented with disclosure to the NBM by authorities in Latvia and Estonia," a summary states. 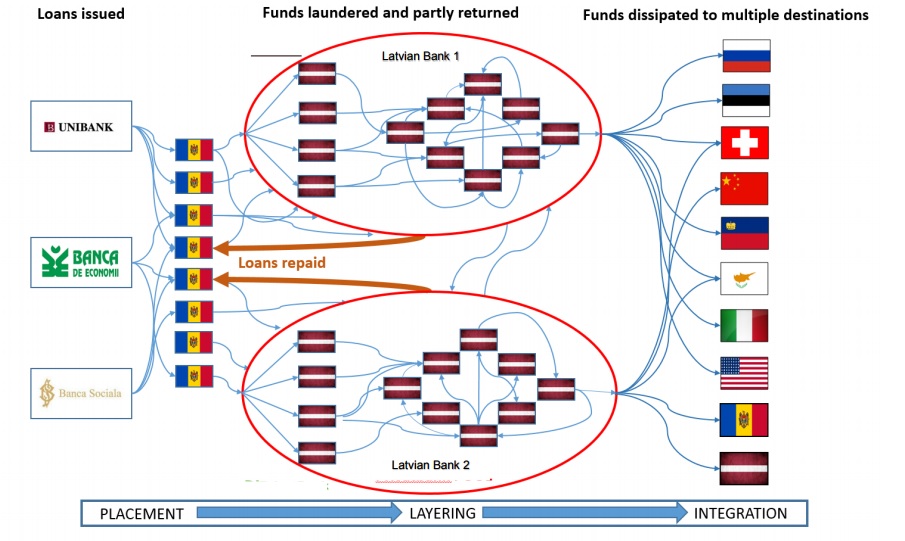 Yet it is the size of the fraud that is startling, as well as its complexity.

"An analysis was carried out of the initial destination of loan funds issued to Shor Group companies by the Three Moldovan Banks between January 2012 and the end of November 2014. This analysis identified that USD 2,617.9 million (or 89% of all) of loan funds issued to Shor Group companies was transferred direct from the current accounts that received the loan, to accounts at two Latvian banks mainly in the name of UK limited partnerships or other companies with opaque ownership structures in offshore secrecy locations. The remainder of the funds were transferred to accounts in other jurisdictions, including accounts at Russian banks, other Moldovan banks and accounts at other Latvian banks," the summary adds.

The report also suggests other Latvian banks may have been involved (along with banks in other countries) but on a smaller scale.

The official release and links to the reports can be accessed HERE.