april 3, 15:18
Economy
Authors: eng.lsm.lv (Latvian Public Broadcasting)
The government decision to declare a state of emergency has significantly changed Latvians' daily habits, and most people observe the government guidelines, according to research carried out by the state telecoms firm LMT in tandem with the University of Latvia.

The research, which uses data on network events, allows tracking people's behavior in real time and historically. The research compared network use before and after a state of emergency was declared, as well as annual changes in the month of March.

"The declaration of a state of emergency has significantly changed the number of mobile calls made in Latvia," said Gundars Bērziņš, Dean of the University of Latvia's Faculty of Business, Management and Economics.

According to network data, on significant dates – March 12 and 13, when a state of emergency was declared, as well as March 16, when a travel ban was announced – the number of calls made increased significantly compared to the beginning of March and even that recorded on New Year's Eve. (A comparison of network events recorded between March 2019 and March 2020.)

Data likewise suggest that network activity has moved from cities and offices to the suburbs and outside the city. Activity has decreased significantly at Rīga Airport, as well as the main shopping malls and the University of Latvia, the Rīga Technical University, the Dailes Theater and elsewhere. 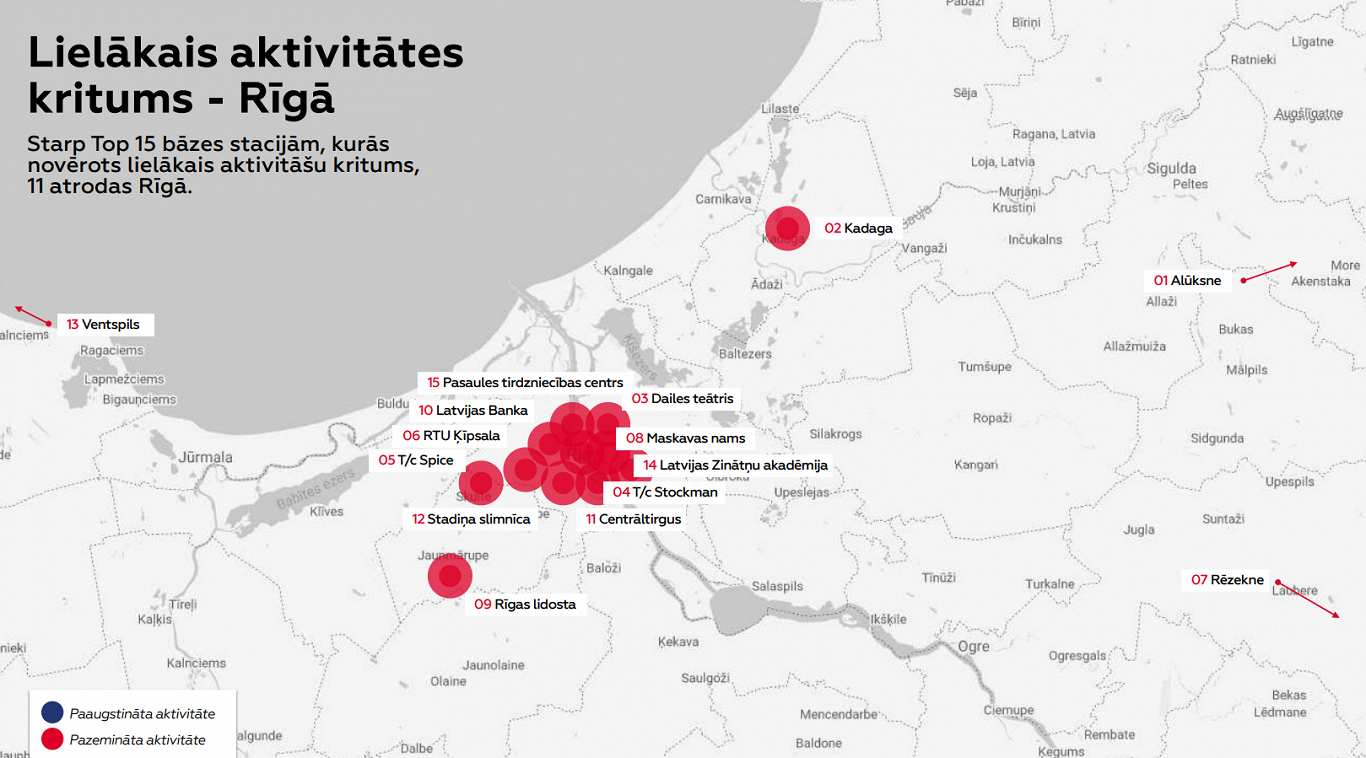 (Out of the 15 network stations which have seen the sharpest decrease in activity, 11 are located in Rīga.)

"There are some good news. The first is that the Covid-19 crisis has encouraged a thing we were unable to achieve for years. It has returned people to Latvia's regions, significantly unburdening Rīga. Second, our data confirm that all Latvian regions and cities are obeying the request to stay home, and that's why we're in a comparably good situation right now," said LMT head Juris Binde.

"At the same time, there are locations that should be monitored so that the number of people doesn't encourage violations of the social distancing measures," he said.

The research also suggests that activity has increased sharply in recreation spots such as Jūrmala and Salacgrīva, where such activity is unusual in the cool Latvian spring.

People's habits are changing too during the crisis. Before the emergency situation, most calls were made at 11 a.m. and 5 p.m., while after March 12 activity peaks at 11 a.m. and dies down soon after. "It is clear by now that our approach allows to monitor the situation to provide decision makers with real-time information about the locations of mass gatherings and about people's changing habits. We can tell if people continue working from home or return to work as they used to," said Gundars Bērziņš.

This big data analysis used data from March 2019 to March 2020. The number of network events analyzed was 160 million in March 2020 and 1.9 billion in the past twelve months.