Small incomes got even smaller last year in Latvia and Europe

The Covid-19 pandemic has brought many challenges, one being inequality in society. The people with low incomes have been affected more than the wealthy, according to EURANET PLUS report on September 13.

The overall figures for 2020 show that the impact of the pandemic on the economy and on the labor market has not been as high as many were concerned at the beginning. Many sectors of the economy found a way to live with the pandemic and continue to function successfully.

As a result, in Latvia, average wages continued to grow during the pandemic. Unemployment did not soar and currently has returned to pre-pandemic levels at around 7%.

However, the figures differ among wealth levels. Eurostat published first estimates in the summer of how the poorest and richest Europeans have been affected by the time of the pandemic. The estimates may still change once more extensive data is available.

Dividing the population of Europe into quintiles of wealth level, it shows that for 20% of the poorest Europeans last year, compared with 2019, their employment income has fallen by just over 10%. For the next quintile, the drop in income from wages is already smaller, while the most wealthy population's employment income reduced by just under 3% last year.

Support measures implemented last year, such as benefits, bonuses and others, have played a major role. Eurostat has also estimated the average household income and, despite the fact that income from work has declined, household income has increased compared with 2019. The largest increase was again in the quintile of the most deprived population – by almost 2%. 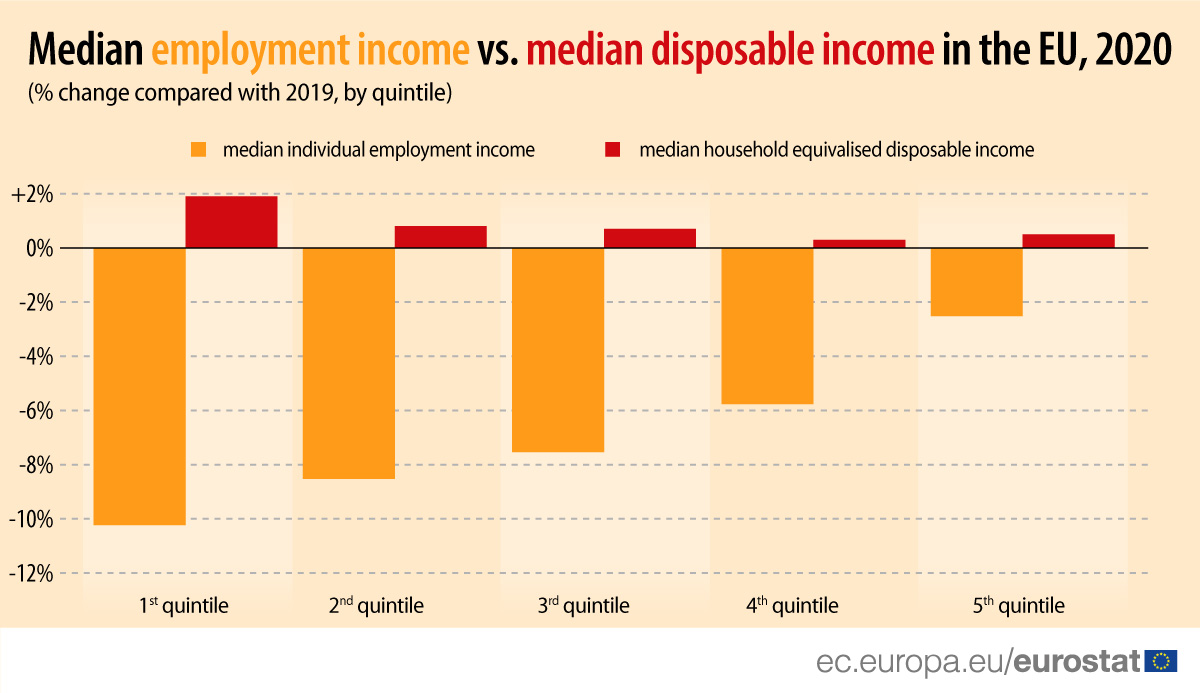 Since household incomes have not fallen but even increased in the most deprived population, what are the experts concerned about? The main reason is that households' disposal income has increased due to the various support measures introduced during the pandemic. All of them are short-term solutions. It can occur that the aid measures will be completely suspended before the 'defeat of the pandemic.

There are active discussions on this and a number of economists say that the year has been a long enough time for businesses to adapt. On the other hand, the continued “living on benefits” of some people, without knowing when and whether their employers will recover, is also unwise, because it is better to shift these people to other sectors where everything is right and there is even a shortage of employees. For example, in Latvia there are no longer any downtime benefits, and restoration of these benefits could only be decided on if a number of companies have to be restricted again.

Experts who are investigating inequality problems in society ask whether the proportion of the most deprived will not take the greatest blow at the end of all aid measures. The reasons why the most deprived people's job incomes in Europe fell most drastically last year are related to the nature of their jobs. These are often jobs where human contact is needed and are the most frequently affected by the restrictions. Employers have often opted out of part-time work, and acceleration of technology during the pandemic replaced many simpler jobs.

Therefore, experts stress that changes must take place at several levels, including the education system aimed to reduce inequality and increase productivity at work. Otherwise there is a risk that the opportunities offered by new technologies will “get stuck” in individual companies and certain groups of employees who are well-educated. But others won't get any benefit from it and will increasingly lag behind in both income and opportunities to get good jobs.