The pandemic time has highlighted a huge problem in Latvian society -- a lack of media literacy, not knowing how to critically assess the information or how to distinguish between objective and biased information, Latvian Radio reported December 17.

Media literacy is a set of knowledge and skills needed to work with information and its sources – finding and analyzing information, critical evaluation of content, distinguishing objective information from biased.

Thousands of false messages are encountered daily by Evita Puriņa, head of the Re: Baltica research journalism center. According to her, Facebook is being used deliberately to disseminate disinformation because people are on this platform a lot.

For some time now, Facebook's users have been sharing the most false news related to the pandemic. Puriņa said that the pandemic has highlighted a huge part of society that lacks media literacy.

“It already has serious consequences. So far, it was a theoretical statement: media literacy is important. But its consequences were not regarded as too serious. Now we see it as a disregard of restrictions, a failure to believe vaccines that could actually get us out of this situation.

A huge number of people share daily with no critical evaluation whatsoever information that doesn't have any sources at all, which is often at the level of somebody told me,” Puriņa said.

Most of the information can be verified with a couple of clicks on the Internet before sharing it.

“If we remember the doctor assistant Marina, the video blew up. There were many thousands of views out there in a couple of days. But if you start listening to what was said in that video. There was no factual evidence at all for those statements. They were completely out of thin air about the fact that an acquaintance or friend of a millionaire from England said that there were many people dead from the vaccine trials and that the others had been turned into cripples. People share these things,” Puriņa said.

This week, for example, in a couple of days, 12 thousand Facebook users shared false news that COVID-19 tests were invalid because they allegedly showed positive results in lemonade.

The sharing of false messages shows public disbelief in the government and its messages in the media, but secondly, media literacy is undervalued in the education system, said Puriņa.

"Well, one literally wants to scream – people, think about it, put it in school curriculum from the first grades! That, apparently, is the only solution, and at the moment, we see the consequences,” said Puriņa.

Just like three years ago, the highest expectations of Latvian residents regarding the strengthening of media literacy are directed towards the media (TV, radio, internet and printed media) – 43% of those surveyed would like to acquire the skills from the media themselves. They are followed by educational establishments (13%), libraries (9%), seminars and conferences (8%),  public events (7%). 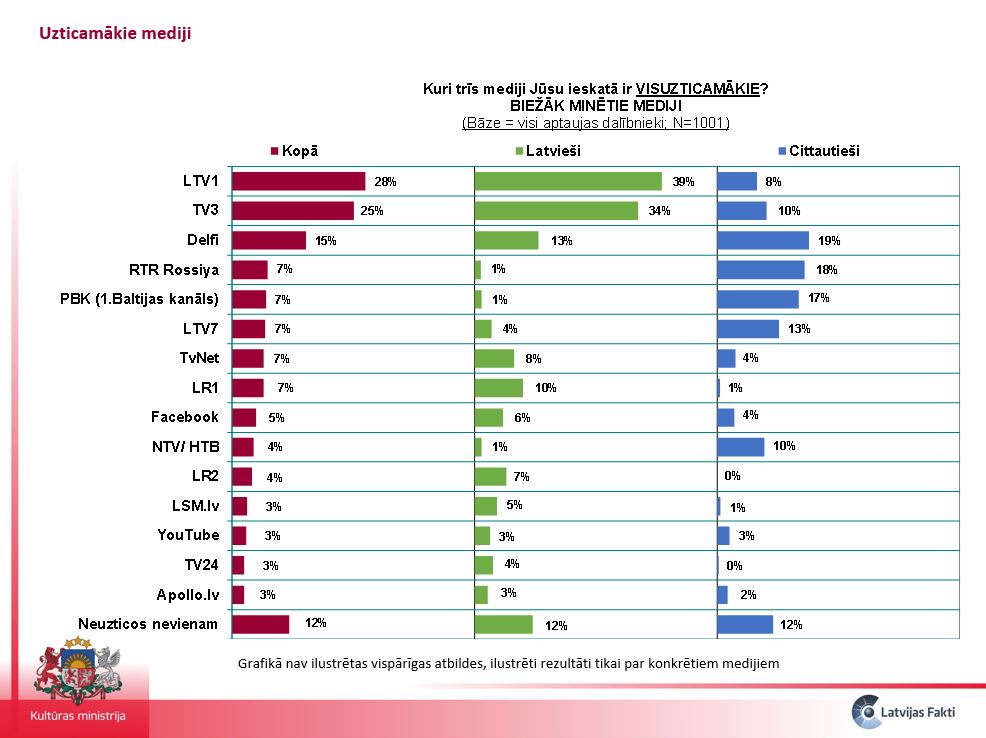 Selga Laizāne, Deputy State Secretary for International Affairs, Integration and Media, said that the indicators show the need for further development of social media. It is therefore a concern that the issue of public media financing is still unresolved.

The study was carried out between 9 October and 19 October, polling 1001 residents aged 15-74 of all Latvian regions.