october 15, 2019, 13:06
Diplomacy
Authors: eng.lsm.lv (Latvian Public Broadcasting)
Another high-profile visitor dropped into the Latvian capital October 15 in the form of Charles Michel, who will take over from Donald Tusk as President of the European Council on December 1.

Michel was welcomed by Prime Minister Krišjānis Kariņš, who demonstrated his French-language skills at the start of their joint press conference declaring "Welcome, Charles, and thank you for a good discussion" before switching to Latvian to describe how the pair had already been working together at European level as Prime Ministers of their respective states. Michel has been Prime Minister of Belgium since 2014 and Kariņš also took the opportunity to praise his diplomatic skills, which he said would serve him well in his new job.

A real pleasure to discuss with @krisjaniskarins in Latvia 🇱🇻 on how we can take our #EU to the next level and tackle challenges of our time: climate action; free and fair trade; security and migration. pic.twitter.com/XyIfOXRXIB

Topics discussed Tuesday included European Union sanctions against Russia, with Kariņš reiterating the view that without Russia fulfilling its obligations with regard to Ukraine concerning the Minsk Agreements, "For Europe there cannot be any reason to cancel or change the existing sanctions regime." 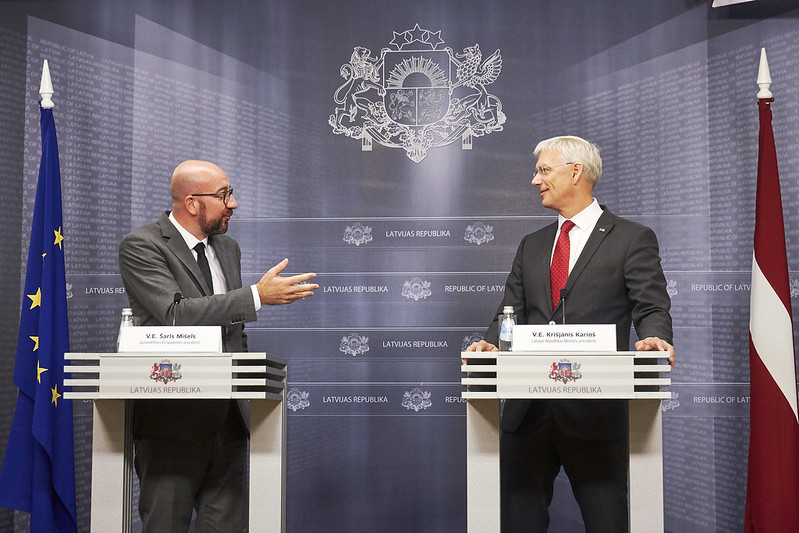 Also under discussion were the European Union budget over the next seven years, development of the European single market and efforts to combat money-laundering in the EU in a "coordinated, centralized way".

For his part, Michel expressed hopes about last-ditch efforts to approve a so-called 'Brexit' deal between the EU and United Kingdom and said with regard to the EU's long-term budget planning that it was "not just a theoretical question but a technical question" and that it was necessary to "mobilise Europe's money" in a constructive way and use a "green deal" to stimulate development.

"This is an important moment for the European project," Michel said, underscoring the need for the various EU institutions to work together with what he called "a new pragmatism".

Pragmatism recurred when Michel was asked by the Reuters news agency what he meant by calling for "pragmatic" relations with Russia recently. In response Michel said sanctions against Russia would continue but rather danced around the question, calling for a united European position and saying the matter would be discussed again in December.