In a letter censuring the deputy's remarks and representative travels to Crimea, the EP President wrote that Ždanoka was “in blatant contradiction” in her posture on Ukraine, where the EU refuses to recognize a hastily-propped March pro-Russian referendum ostensibly joining the land's historic peninsular ethnic hotbed to the Russian Federation, which has since stayed involved militarily to engulf an even wider region of southeast Ukraine in hybrid forms of frozen armed conflict. 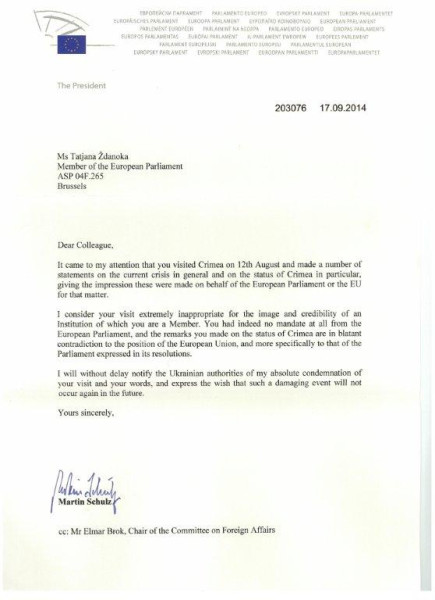 Schultz reminded her that her support for the March 16 referendum outcome of Crimea’s accession to Russia and remarks made during her most recent trip there on August 12, were “completely contradictory to the position of the European Parliament and the EU.”

He pointed out that she was deliberately misleading people to think that her statements were the EP's official stance and thereby inappropriately discredits the institution to which she is an elected member.

''You were not given an EP mandate, and your statements regarding the status of the Crimea were shamelessly in contradiction with the EP's stance, as well as EP resolutions,'' Schulz emphasized, adding that he will immediately notify the authorities in Ukraine regarding his stance on this matter, so that ''such a damaging event'' does not happen again.

The head of the EP's Foreign Affairs Committee, Elmar Brok, has also sent a letter to Zdanoka, where he recommends Zdanoka get in contact with legal experts, who would be able to explain to her that the referendum in the Crimea was organized illegally, and does not have any value. 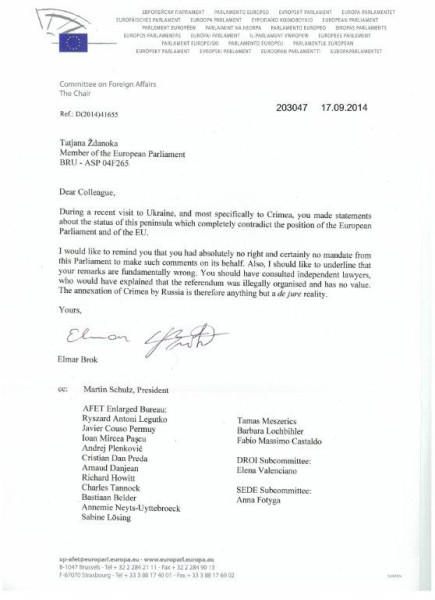 Meanwhile, Zdanoka has confirmed to LETA that she has since sent a reply letter to Schulz, pointing out that he is an MEP "just like she is", and that only my voters can tell me what to do."

As ITAR-TASS reported in a timely manner on the political relic of the late Soviet-era decline Thursday:

“That’s nonsense,” Zdanoka replied. “According to the European Parliament regulations, MEPs are required to adhere to the position stated in the EP resolutions only when they speak on behalf of the EP or are members of official delegations. Their personal opinions as individuals and politicians or statements made during their own working trips fall under the notion of the freedom of conscience and speech. EU leaders can’t cancel them no matter how hard they may try. Without the freedom of speech, the European Union will become a simple tool for international corporations, hostile to ordinary people.”

In her written reply to Schulz and Brok, Zdanoka said, “The EP leadership must realize that after the violent coup in Kiev, supported by the West, the population of Crimea could not put up with the possibility of losing the official status of the Russian language, the native language of the majority of people living in Crimea, and with the terror of the far-right groups closely associated with the authorities in Kiev.”

“The Republic of Crimea has just as much right to self-determination as Scotland, Catalonia, Corsica or any other ethnic region in Europe. People in Crimea used their right,” Zdanoka said.

ITAR-TASS incorrectly noted Moscow's neo-imperial cheerleader from Latvia as "re-elected to the European Parliament for the third time in May of this year, remaining one of the staunchest advocates of Russian-speaking people’s rights in Europe, primarily in the Baltic states."

However, in fact of Latvia's eight deputies to the EP, only Roberts Zīle of the National Alliance is currently serving a third popularly elected term in Brussels and Strasbourg.

As reported, after her visits Ždanoka's Green political faction group members called for her to be removed over her contradictory position, yet the partner European Free Alliance group took no action.