If the spread of the Omicron strain goes uncontrolled, there could be 6,500 patients in Latvian hospitals in the worst case scenario, according to forecasts developed by epidemiologists and presented to the government December 21.

Epidemiologist Ņikita Trojanskis told the government that the Omicron strain spreads two to three times faster than the Delta. He quoted data from the UK claiming that in people who have received two doses of the AstraZeneca vaccine, protection against infection with the Omicron is nearly 0%. For those who have got two doses of the Pfizer vaccine, the rate is about 20%.

"It looks like at least in the short term the booster vaccine significantly increases the protection against infection, so it is likely also to be true regarding transmission. Its effectiveness would be 50-80%, we cannot yet judge the sustainability of this effect," Trojanskis said. These are only the initial data, though. Data on natural protection after recovery are also mixed.

Looking at the prevalence of Covid-19 Omicron, it appears that the virus would take 2-3 weeks to fully overtake the Delta strain. This means that intense local circulation could start around Christmas, but after January 7, most of the new cases would already be Omicron. 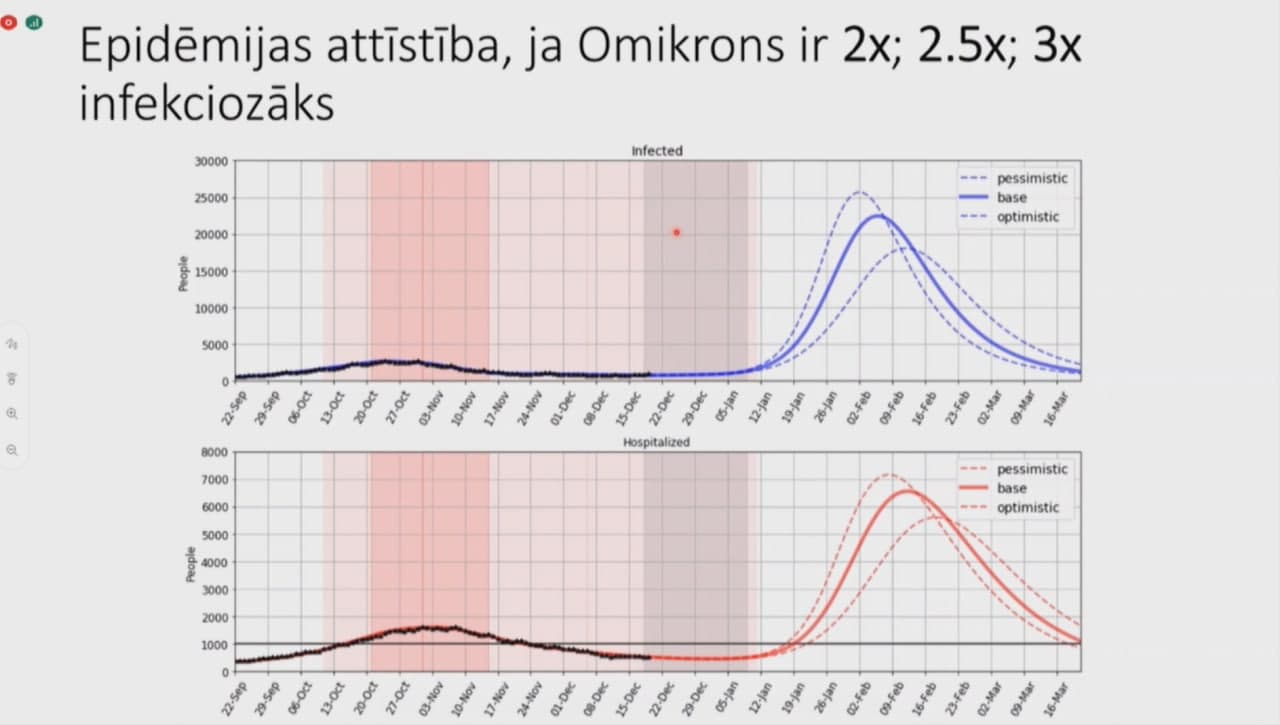 Photo: Screenshot from the presentation by epidemiologists

"On the assumption that Omicron is two and a half more contagious than Delta […], we can forecast the morbidity wave to grow in January until the first half of February. Similarly, hospitalization would reach its peak in the second week of February," Trojanskis said.

According to the epidemiologist model, each unvaccinated person would be infected during a new outbreak. And at worst, there would be 6,545 patients in hospitals with Covid-19.

In the previous outbreak of Covid-19, which Latvia experienced this autumn, the peak of patients in hospitals was approximately 1,500. As a result of this number of patients, hospitals had to open new Covid-19 departments and partly limit the provision of other services.

On the other hand, the peak of new cases of Covid-19 could be more than 25,000 per day during this outbreak. This is not likely to be seen in official data due to testing capacity.

“I think there is still hope that omikron could have a different clinical level [of severity]. I think we will find out soon,” the epidemiologist added.

The government agreed to instruct hospitals to prepare for patient inflows in line with forecasts. Meanwhile, the Operational Management Group will have to work on action scenarios after January 11, which is currently the deadline for the end of the state of emergency.