However, enthusiasm for the new premises was soon reduced by some design problems that it is remarkable no-one spotted in advance. Sales counters are so high that people with reduced mobility cannot access them. There are also concerns about work safety violations - in order to serve from the high counter tops, some sellers are standing on pallets, a move that has raised the concerns of the State Labor Inspectorate.

Santa Survila uses a wheelchair to get around. She is a member of the Society for People with Disabilities "Wings for Wheels" and also a member of the Latvian Association of Myopathy "Sartorius". While attending the Riga Central Market Pavilion, she concluded that it is inaccessible to people with disabilities. Namely, sales counters are so high that for short people and people in wheelchairs they are simply not practical.

"The sales counter is at a very high level. The appropriate height would be 80 centimeters, which is also set in the building codes, but these counters, we measured at one meter and thirty centimeters high," said Survila.

The height of the counter quite simply prevents people in wheelchairs from shopping in the Riga Central Market, she concludes.

"For a person in a wheelchair is literally impossible, because not everyone has the physical ability to raise their arms high," said Survila, noting that the current arrangement also makes it hard for the seller to see who they are serving and do so in an appropriate and individualised manner.

Linda Cērpa, a representative of the 'Susteno" organization for cooperation with people with special needs in Latvia, agrees that accessibility and the environment at what is supposed to be a showcase new facility is very poor.

"I don't like it because it is very inconvenient for shorter people. If I'm moving around in a wheelchair, then I'm at a child's height. It's very hard to hand money over - you can't. Then the dining area - there too, I did not see lower tables to sit down at. When you look you see high counters, high tables, high chairs," said Cērpa.

Ivars Balodis, head of the "Apeirons" Association for People with Disabilities and their Friends, points out that the availability of the Central Market environment to disabled shoppers is low, there are no references to any accessibility criteria, and it is not clear how such a project has been approved.

"At the central market, I feel that the norms in force in Latvia have not been observed. And the question is probably how such a construction project has gone through the building board or other responsible institutions. And people with intellectual disabilities often have orientation difficulties. Where to go, where you are... It's very complicated and difficult. It shouldn't be," said Balodis.

Edgars Butans, representative of Riga City Construction Board, said it is not immediately possible to comment on the particular situation but pointed out that the Central Market was a building that had been built before the requirements of environmental accessibility had been established.

In such cases, in certain situations, compliance with environmental accessibility requirements is not considered. However, he promised that the construction board would get acquainted with the project and give his opinion.

Agita Užāne, Head of the Project Management Department of Riga Central Market, believes that as counters have been purchased they cannot be changed. Likewise, the possibility of replacing at least some parts of the counter's design with lower ones is not considered.

"We are now aware of our mistake, but we've bought it, we can't change anything right now," said Užāne.

But it is not just disabled customers who are having problems. High counters also make it difficult for sellers. They can't reach everything on the counter, so they have started using steps made of pallets on which they can climb, but whether they are in line with safety requirements, Užāne doesn't know.

"The vendors have invented the pallets that they can step up onto. We have had no complaints from the labor inspectorate," said Užāne.

Latvian Radio showed the photos taken by Santa Survilas to the State Labor Inspectorate, which show sellers who have stretched over the counter while standing on the pallets. The Inspectorate said that it has also seen such images on social networks and said that although no complaints have been received so far, testing will be carried out at the market. 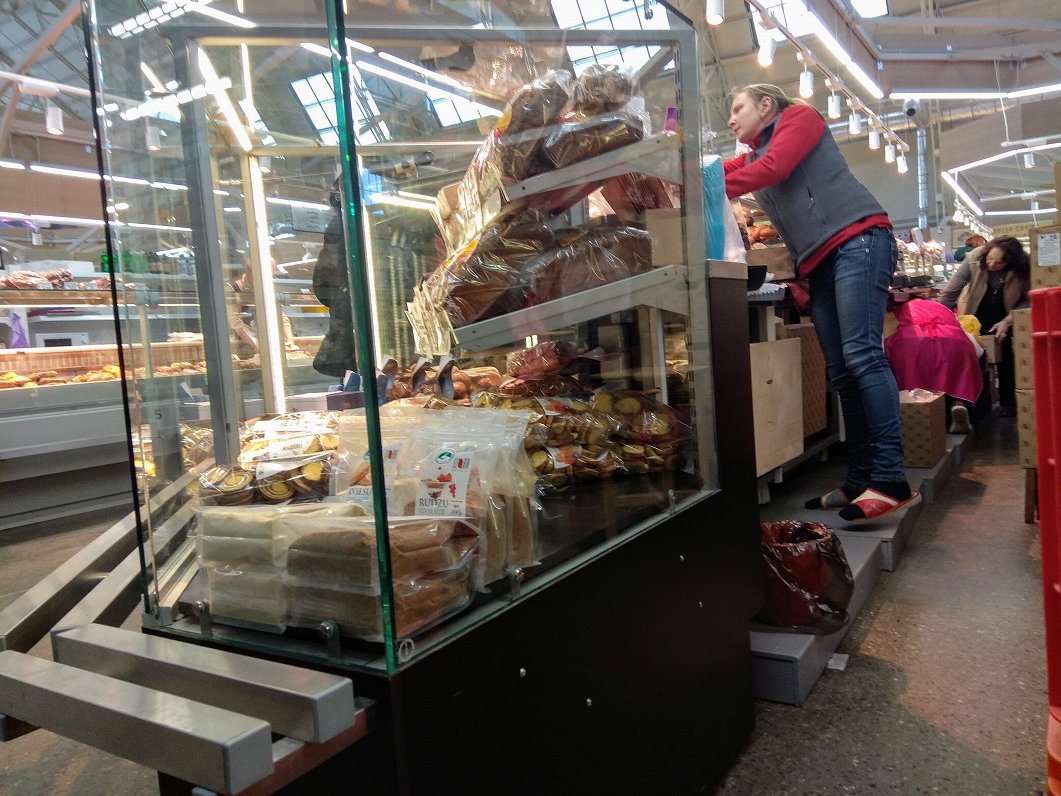