november 14, 2019, 10:29
Art
Authors: eng.lsm.lv (Latvian Public Broadcasting)
This year's Staro Rīga light festival will include 35 objects, which can be viewed November 15-18 each day from 17:00-23:00 with the help of a specially prepared walkable itinerary, according to information from the organizers.

22 of the objects were submitted by artists and chosen by the program selection committee, and an additional 13 are cooperation partner light objects. 21 objects can be found in Old Town and the city center, with one additional object located at the Āgenskalns Market in Pārdaugava. 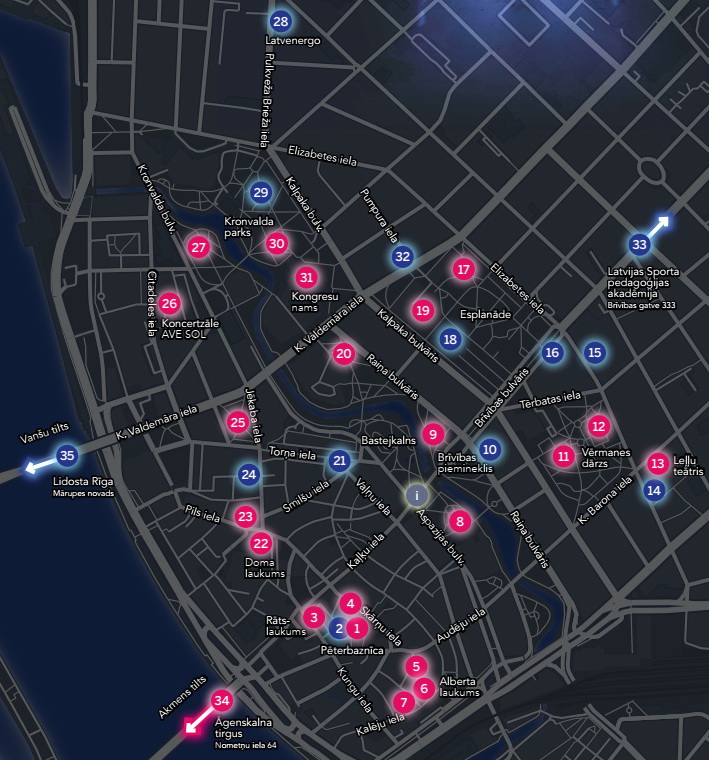 The Āgenskalns Market is a good place to start before heading over to Old Town. The market territory will feature the "Holoscope" interactive audio-visual installation. The idea author is multimedia artist Zane Zelmene, and in this project she's combined the real world with the virtual. This new vantage point will include several phases - the past, present and possible future scenarios.

You can find three interactive objects near Albert Square at the south end of Old Town. At Vecpilsētas Street 8a everyone can try their hand at playing a laser-harp. Estonian producer union "Gala Stage OÜ" created the object to entertain onlookers with improvised compositions, created by using your hands to cover the laser “harp” strings at the “Music of Light #ARFA”.

Next to Albert Square “Bikibuk's Adventure” object will delight smaller festival attendees with a trip through Rūta Briede's illustrations. Listen to poetry by Inese Zandere and become one of the Bikibuk's Adventures characters using a special camera.

In turn at Kalēju Street 57 take a peek into the interactive mirror at the “Reflection” object by Māra Mortukāna. It will reflect a human face – three times larger and in three dimensions at once. The installation will also offer the opportunity to get to know a new, usually hidden, fourth dimension of your personality.

The next group of objects is located around Town Hall Square. The St. Peter's Church steeple will be wrapped in the I Did It Management company's laser "Tower of Light" projection. Nearby the Museum of Decorative Arts and Design facade will feature the “Mystery of Skārņu Street” metaphysical painting by artist Agnese Melbārde and composer Rihards Zaļupe. The graphic animated detective story invites you to enter the backstage of the world of art, heading into a world full of adventure and secrets, which is located “on the other side” of the museum wall. 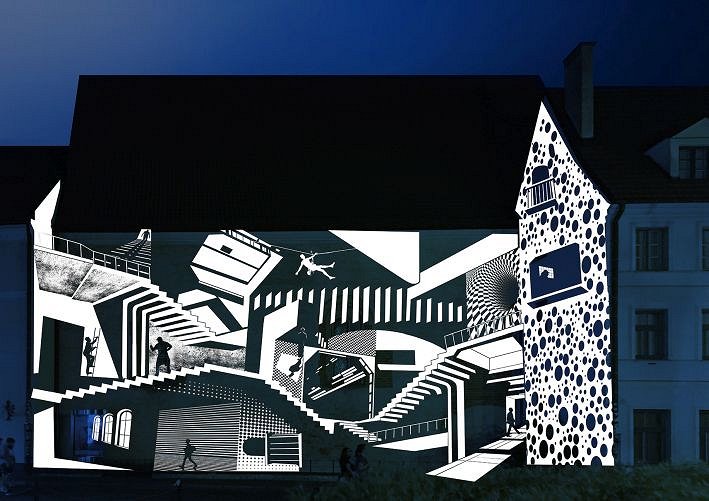 Next door at the Riga Art Space you can see legendary British artist Brian Eno's "77 Million Paintings". His multimedia generative art installation is sure to be a unique experience, because neither the audio, nor visual content repeats. The installation has already travelled halfway around the world, and the organizers advise obtaining a free entry card online to avoid lines.

Afterwards head to Dome Square to find a portal to a different dimension, or “Rīga's Tesseract”. The interactive installation will take you to a time when many Latvian homes had the Latvian-produced Rīga piano. Viewers can influence what happens in this other dimension with their presence and movement.

Next get lost in Voldemārs Johanson's "Photon Constellation" at the Art Museum Riga Bourse. In the experimental installation an audiovisual landscape suspends light in the air like a 3D object. The artist uses completely new data visualization technology for the first time in creating the installation. 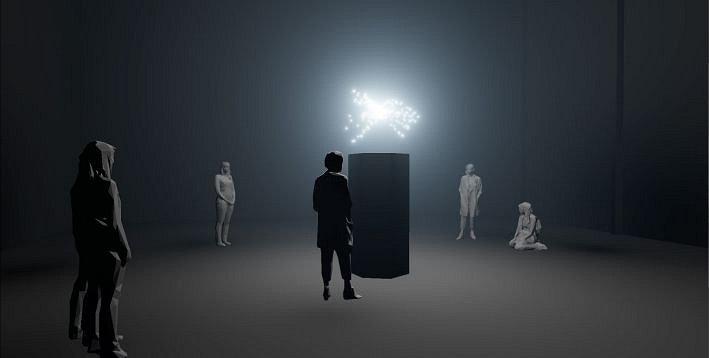 At the nearby Independence Square Reinis Smiltens and his team have created the "Reflect" light installation. It encourages visitors to think about the inner world of human beings as portrayed with the help of mirrors, light reflections and sound effects.

Kronvalda Park will feature the “Lead Lights” sculptural light performance composed of an impulsive interplay between people and light objects. Participants can interact to create play with moving open-work projections and the surrounding environment, transforming the park space into a unified light game installation.

Also at Kronvalda Park head to the Ķergalvis Pergola and take the extraordinary road "You, In Me - I, In You" created by the LAC Latvian College of Culture students.

The Congress Hall forecourt will host Danish Doctor of Arts Tine Bech's interactive video projection "Colour Me Beautiful", which will be especially fun for kids. Five colored runways lead to a vivid landscape that captures the images of players in the game. Indulge in the fun of the game and be captured in the bright labyrinth of colors.

Returning to the other side of K. Valdemāra Street head to the canal by Reimersa Street. A bright palm will decorate the park – kinetic and electronic artist Krista Pudzena's light sculpture "Seven Steps Upward" uses light, color, forms and movement to create a piece of abstract tropical paradise.

The Art Academy courtyard will contain a 15 minute mixed media symphony titled "Sea Routes", created by the international artist group Tura Ya Moya. They specialize in creating interdisciplinary analog installations. Images will be projected from sea containers, which have travelled 3000 kilometers through Greenland and Scandinavia, both art student and professional works.

In turn, the National Art Museum facade will be decorated with the interactive video projection “Touch Your Fears”. The project idea is based on artwork and themes by artist Miķelis Fišers, inviting you to challenge the known. Viewers will be able to bring to life grasshoppers, lizard people, aliens, reptiles and other characters brought to life under the direction of Māris Kalve. 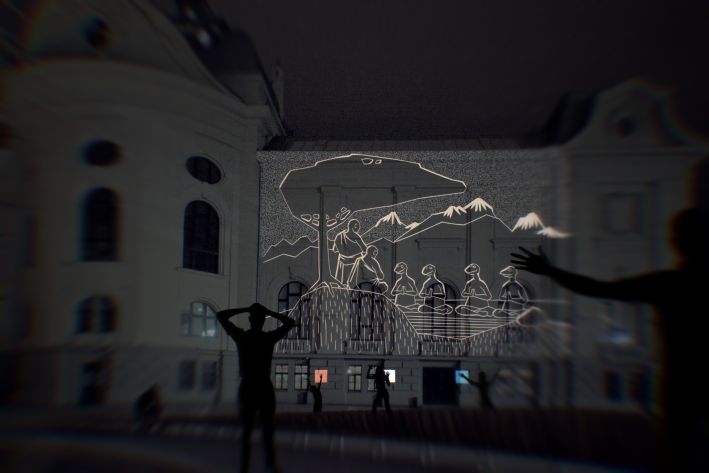 At the canal near Bastejkalns Hill take in the multimedia performance "Déjà Vu" by Juris Matuzellis (Pepe), DJ Monsta and various other local artists. The visual play with the canal water will rise to 18 meters and be 30 meters wide. Many technological aspects will be used along with audiovisual show elements, animation, holograms, water effects, moving graphics, fountain choreography, musical accompaniment, lights and lasers.

At the Opera Square you can see the light installation “Soft Power” inspired by pop singer Aminata's song and created by Jānis Pētersons. It's a particularly sensuous tale of self-acceptance and self-awareness. The installation is a symbolic breakout site for emotions and feelings.

Afterwards head to see German artist Robert Seidel's creation “Signs of the Times Portal” at Vērmanes Garden Park. The installation was created together with the Latvian creative group Artistic, and is a cross between a video and laser projection, which creates various dimensions by reacting to the movement of viewers.

The Vērmanes Garde Park bandstand will feature an interactive video project by French artist Matthieu Tercieux titled "You Are Here... Elsewhere". Its essence is an interaction of light symbols and nuanced video. 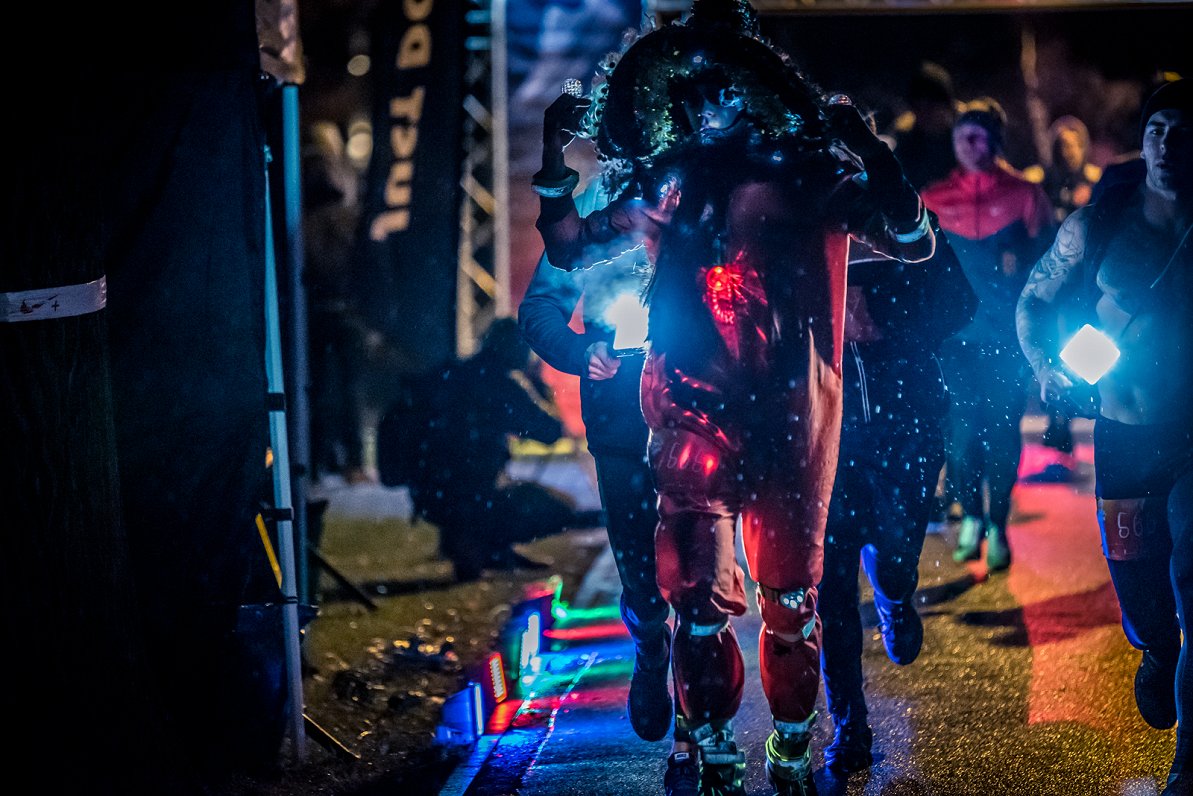 One last main program object can be found at the Puppet Theater courtyard. Artist Vita Radziņa created a light installation and hologram titled "Eternal Dance". It aims to show festival attendees an installation, which encompasses a Puppet Theater performance dedicated to the Latvian centenary called “Golden Horse” -  a four-dimensional vision, as that seems to be this year's main festival trend!