On November 18, the 103rd anniversary of the proclamation of the Republic of Latvia will be widely celebrated with live concerts in the capital and regions, as well as with cultural events that can be watched on Latvian Television online. You can see the full schedules at the LTV webpage, with links to the various shows on both LTV1 and the Viseim online channel.

At 12.55 viewers will be able to watch the greeting of the National Armed Forces to the Republic of Latvia. This year, the military transport parade will take place with 22 technical units and an aircraft overflight. The Minister of Defense Artis Pabriks will give a speech.

The traditional national holiday concert, which will take place in the Presidential Palace for the second year in a pandemic, will be on air at 6 p.m. The concert "We are by your side" will feature both well-known and dear songs, as well as new premieres. Six young people, the winners of the "Speech by the President of Latvia" competition will share their thoughts on Latvia - its past, present and future, and President Egils Levits will give a celebratory speech at the culmination of the concert.

From 7.30 pm there will be a historic moment in the live broadcast, as the symbol of freedom of the Latvian people - the Freedom Monument - will shine especially brightly, in the future it will be clearly visible even in the dark of the year. The lighting will be switched on for the first time during the live broadcast of the LTV festival from 7.30 pm to 8 pm. The historical event will be accompanied by a new arrangement of Imants Kalniņš's song "We are the ones who have lived in the dark for a long time". The live broadcast will be hosted by LTV journalists Karīna Rubene and Gundars Rēders.

At 20.45, Latvian Television will close the national 103rd birthday celebrations with another concert. Together with the hosts of the evening, Māris Slejs and Reinis Ošenieks, everyone will have the opportunity to feel the festive mood in their home, listening and singing songs that strengthen, recharge, unite and delight. They will be performed by favorite musicians - Siegfried Muktupāvels, Ieva Akuratere, Aija Andrejeva, Jānis Aišpurs, Katrīna Dimanta, Ozols, Mārtiņš Kanters, "Chipsis un Dullais" and "The Sound Poets", Kristaps Krievkalns instrumental group.

From 13.35 to 18.00, LTV1 will offer viewers the opportunity to see classic feature films of Latvian cinema.

The concert will feature six young people together with the musicians - the winners of the competition "I - Latvia's Future Maker" of the Chancellery, who, imagining themselves as the President, will give a celebratory address on the day of proclamation of the Republic of Latvia: Emma Roze Bekiča, Rūdolfs Indrēvics, Terēze Stepiņa, Nikola Princova, Albert Smilktens, Edward Kristiāns Kozlovs. At the end of the concert, a solemn address by President Egils Levits will be given at around 7.20 pm.

The recording of the concert from Riga Castle will be shown on LTV and Replay.lv at 18.00. At 14.00, a concert dedicated to the Anniversary of the Independence of the Republic of Latvia "Nowhere Far Away ..." will be shown on the Facebook page of the Riga Culture and Recreation Center "Imanta ". The 85th anniversary concert will honor the poet Knut Skujenieks. Actress Dita Lūriņa, musicians Zane Dombrovska and Daumants Kalniņš, pianist Romāns Vendiņš and percussionist Kaspars Kurdeko will perform. 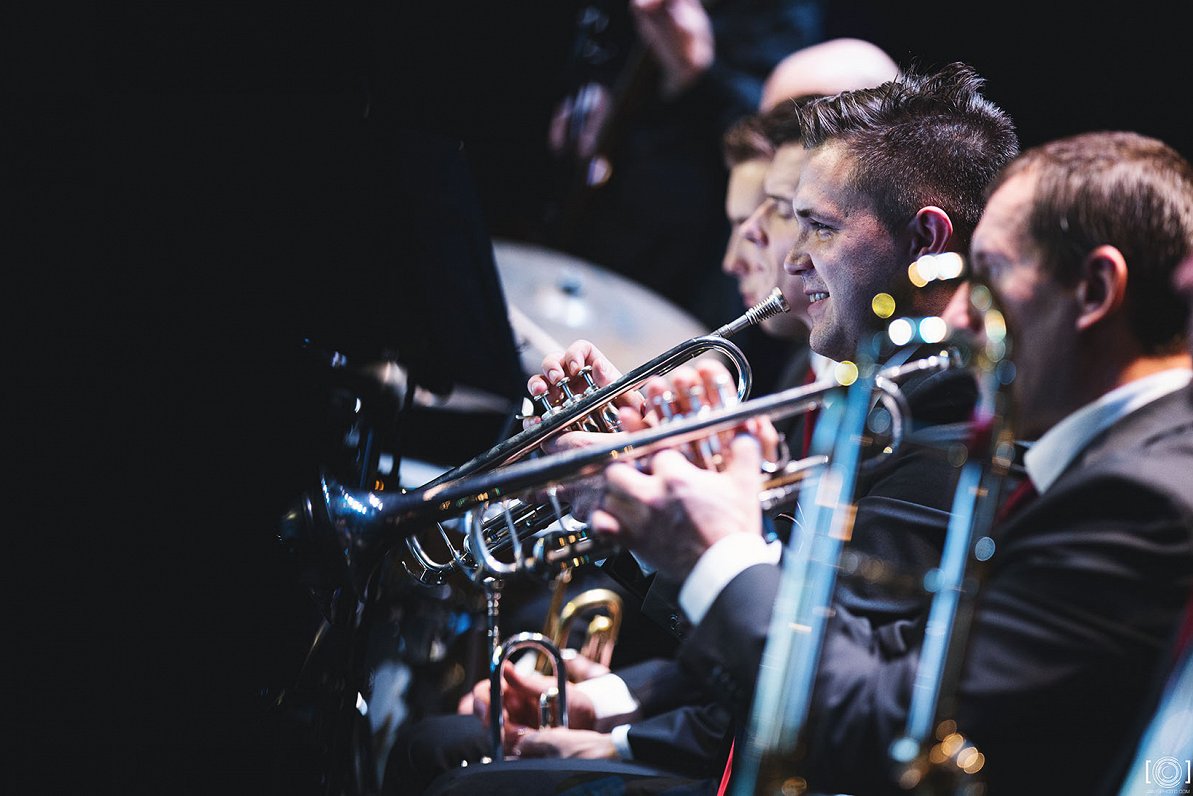 At 16.00, a concert of Latvian composers' music "You are Latvia!". Soprano Gunta Gelgote, mezzo-soprano Ieva Parša, bass baritone Rihards Mačanovskis and accordionist Artūrs Noviks will perform with the orchestra under the direction of conductor Valdis Butāns.

The orchestra together with soloists Ieva Parša and Rihards Mačanovski will perform a series of songs created by Imants Kalniņš from Ojārs Vācietis' poetic performance "The Desperate Field" (1985), as well as the composer's Arturs Maskats' Song Cycle with Ojārs Vācietis' Poetry In the arrangement of Vilnius Šmīdbergs for wind orchestra and mezzo-soprano, listeners will hear Paul Dambis' "Three Variations of Imants Ziedonis and Paul Dambis" (1973). The premiere of the concert will feature a new work by composer Gundega Šmite for "Flood" coloring soprano, accordion and wind orchestra in five parts. Ilona Breģe's arrangement for wind orchestra will feature Arthur Muscat's symphonic composition "Tango" (2002) with Arthur Novik's accordion solo, as well as composer's Romuald Kalson's suite "Wedding Songs" (1979) with folklore themes, arranged for wind orchestra by Mendel Bash. The concert will be conducted by musicologist Liene Jakovleva. 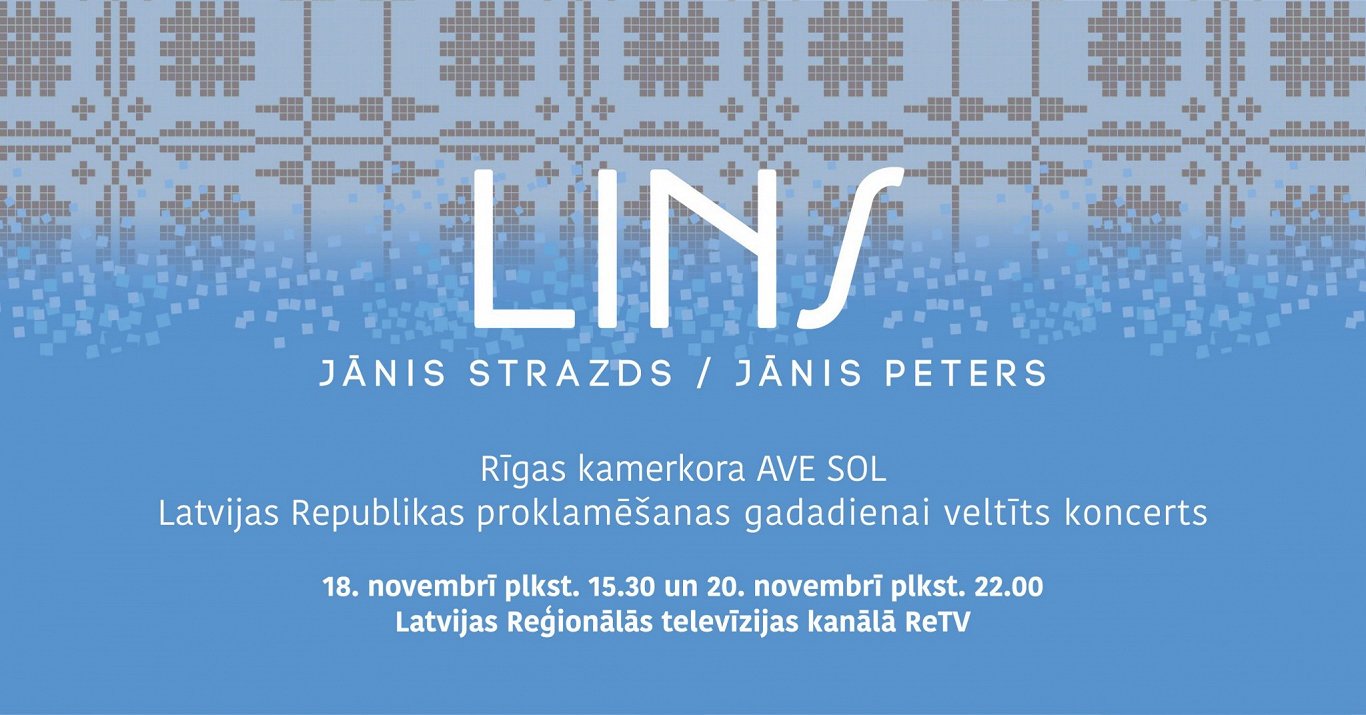 The Riga Chamber Choir "Ave Sol" has prepared a festive concert "Lins" , which will feature songs by composer Jānis Strazds with the words of Jānis Peters. The concert is attended by the Riga Chamber Choir "Ave Sol", conductors Andris Veismanis and Jurģis Cābulis, soloists Ance Krauze and Andris Ērglis, composer Jānis Strazds and instrumental group. The concert will be shown on Latvian Regional Television "ReTV" on November 18 at 15.30 and on November 20 at 22.00, as well as on the Facebook page of the concert organization  "Ave Sol" . 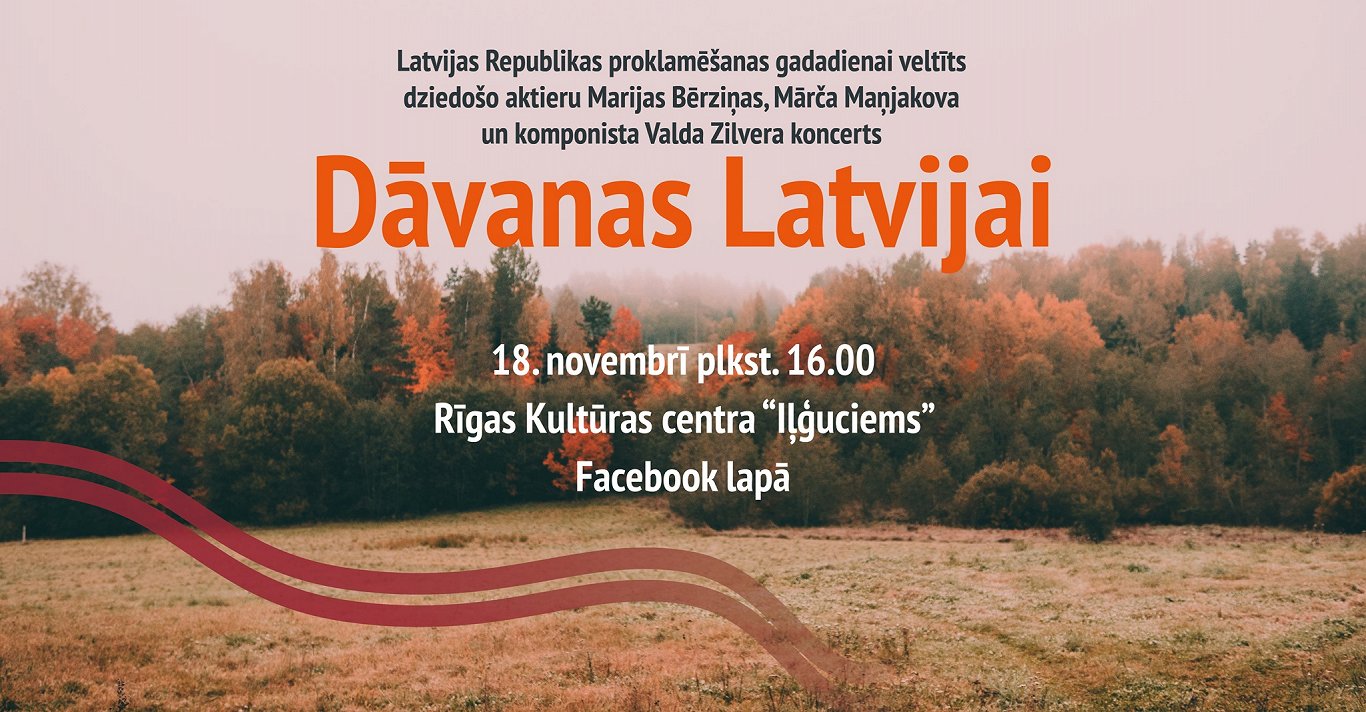 At 16.00, a concert "Gifts to Latvia" will be shown on the Facebook account of the Riga Cultural Center "Iļģuciems" , where singing actors Marija Bērziņa and Mārcis Maņjakovs together with composer Valdis Zilveris will perform. It will feature popular songs by Knut Skujenieks, Imants Ziedonis, Māris Čakls and Jānis Peters, Raimonds Pauls, Valt Pūce, Jānis Lūsēns and Uldis Stabulnieks.

Latgale Embassy "Gors" offers free cinema screenings during the national holiday week, from November 18 to 21. An exhibition of works by Anna Grinčuka and Valdis Bashkirov “Linocut” can also be seen in the Art Gallery of the Concert Hall. Admission to the Latgale Embassy "Gors" for adults will be provided only with a Covid-19 vaccination or disease certificate.

The "Way of Light" in Latvia will light up for the twentieth time. The road lit by more than 11 thousand candles will run through the whole of Jūrmala from Lielupe to Ķemeri. From 4.30 pm, seafarers and guests of the city are also invited to add their lights to the common "On the Way of Light". The light path in the city's central street will be complemented by a candlelit Jomas Street. In the festive greeting on the pedestrian street, Latvian characters will be created from candles - Saule, Auseklis and Austras koks. 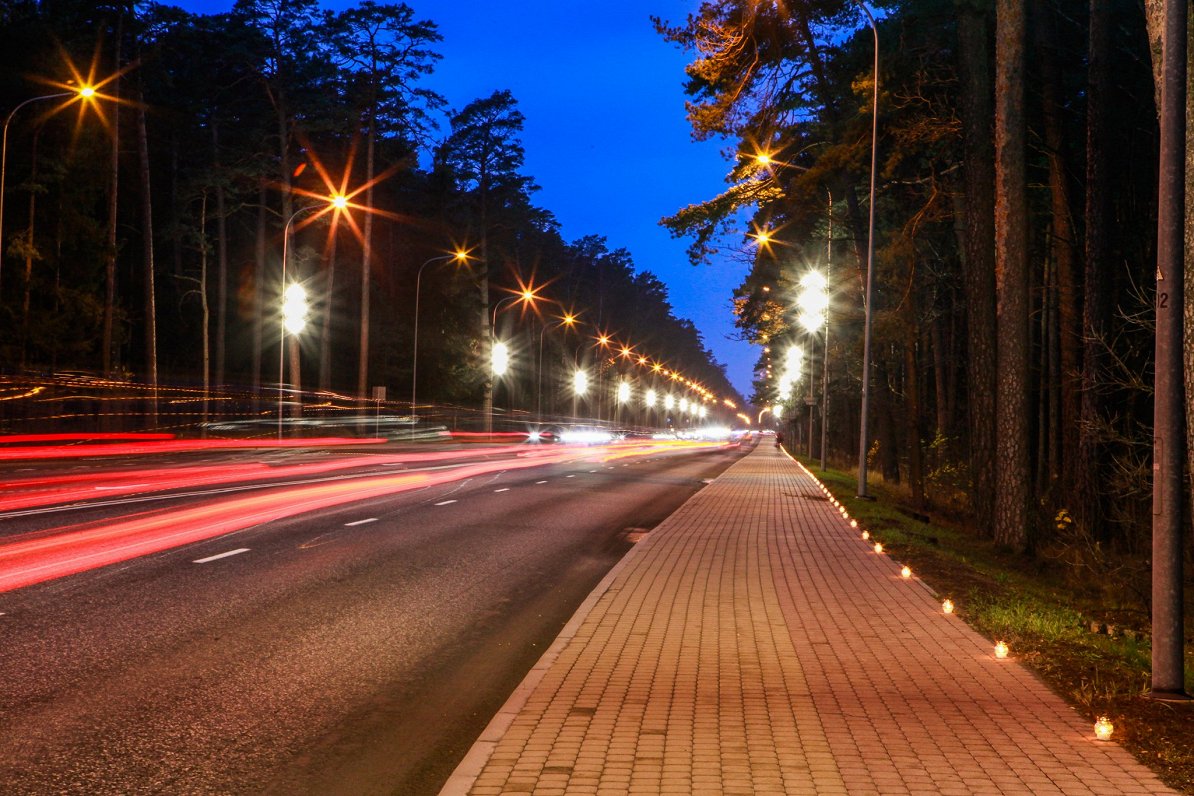 At 16.00, the concert hall "Latvija" invites you to attend the national holiday concert in person or watch the live broadcast of the concert on the Internet. Singers - soprano Ilze Grēvele-Skaraine and tenor Juris Vizbulis -, percussionist Edgars Saksons, as well as organist Aigars Reinis will take part in the concert. The program includes compositions by Latvian composers of different times and generations. Vocal and instrumental compositions by Jāzeps Vītols, Jānis Ivanovs, Marģers Zariņš, Rihards Dubras, Rihards Zaļupe, Jānis Lūsēns will be performed. You will be able to follow the live broadcast of the concert on the Ventspils municipality website and Facebook page .

Percussionist Rihards Fedotovs, oboist Pēteris Endzelis, composer and pianist Raimonds Tiguls, the choir "Latvija" and the hosts of the concert hall - Liepāja Symphony Orchestra will perform a Toccata created by Aivars Kalejs, the choral "Glory to God in the Most High" and Raimonds Tiguls' oratorio "Sea Book". New works by composer and percussionist Rihards Fedotovs will also be performed, which will be supplemented by video projections created by Juris Matuzelis. The first part of Imants Kalniņš's canonical Symphony No. 4, Part 3 of Symphony No. 6, the oboe concert performed by Pēteris Endzelis and the pearls of choral music - "Song for the Motherland" and "Prayer" will also be performed. The concert will be compered by musicologist Edgars Raginskis. On November 18, at 5 pm, you will be able to see it on the Latvian Regional Television channel "ReTV", as well as the concert hall's "Facebook" and "Youtube" accounts.

In honor of the Day of the Declaration of Independence of Latvia in Valmiermuiža Park until November 21, there is an opportunity to go for a walk in a "Field of Light". An online concert will be broadcast on Kuldīga and Skrunda TV social networks at 1900. The artistic program of the concert is composed by Andra Zvejniece, the director of E. Vīgners Kuldīga Music School, and it brings together a large group of artists from Alsunga, Skrunda and Kuldīga.

Composer and pianist Kārlis Lācis will perform at Kandava Culture House at 5.30 pm together with actors Ilze Ķuzuli-Skrastiņa and Kaspars Znotins. In addition to songs from the album "Mežā", the program also includes theater music composed by Kārlis Lācis for the performances "Marija Stjuarte" and "Romeo un Juliet". The event will feature poetry by William Shakespeare, Aivars Neibarts, Marta Pujāts, Artis Ostups and Ivars Šteinbergs.

The vocal group "Framest" will perform in the gymnasium of Vilaka State Gymnasium at 6 pm. In the concert program, the melodies of Latvian folk songs will intertwine with the legendary songs of Raimonds Pauls and Zigmars Liepiņš.

Ainārs Rubiķis will perform as the conductor of the chamber orchestra "Sinfonietta Rīga" at the Zvejniekciems Culture House at 5 pm. They will also be joined by several soloists, including singer Evija Martinsone and violinist Daniil Buljev. Georg Pelēčs' score "Thriving Jasmine" and Pēteris Butāns' "Holiday Music", Selga Mence's "Land of Childhood" and Jēkabs Jančevskis' "Waltz of Florence" will be performed, as well as works from the works of the classics Jāzeps Vītols and Emīls Dārziņš.

The Latvian Radio Choir will perform at the Slampe Culture Palace at 5.30 pm with the program "Day to Weave". According to the choir, the works selected in the program symbolically build a bridge both to the beginnings of the Latvian Radio Choir, recalling the 80th birthday celebration that did not take place in 2020, and to highlight the songs created at the dawn of Latvian music culture. 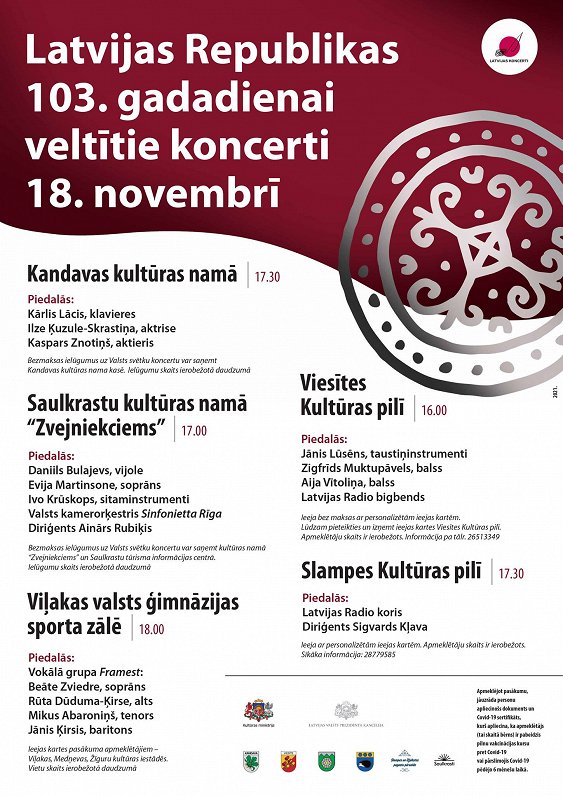