A couple of problems with the KGB files

december 7, 2018, 10:24
History
Authors: eng.lsm.lv (Latvian Public Broadcasting), Mārtiņš Ķibilds (LTV raidījumu "Atslēgas" un "Adreses" veidotājs)
In 1991 Latvia closed the KGB Soviet secret service and took over what was left of its archives. These are now to be published before Christmas, but that this step will lead to full justice and clarity is unlikely.

"The entire room was in complete darkness, there was only a lamp lit on the table. A man, dressed in civil attire, turned the light to my face and remained almost invisible himself. Questions followed one after another, about the supposedly anti-government attitudes within my class, about political jokes, and more. Then he started screaming he knew everything about me and my family who wanted to flee the Bolsheviks. It would be easy to send us even further away than we went during the war. My nerves were on the very edge. I started crying and asked them to let me out."

This is the testimony of the would-be KGB agent, code name Ziedonis. A minor, he was eventually let go when the secret service first interrogated him after the war. They approached him the second time when he had turned thirty. He had become the chief anesthesiologist in the Soviet Union. It was a budding medical profession back then; he basically laid its foundations within the USSR. It was very important to him to get experience in the West, to attend conferences and go on trips.

He was faced with a choice – cooperate with the KGB, or someone else would take his place. He eventually became a KGB agent.

On May 4, 1990 together with his classmate, the famed poet Imants Ziedonis, he voted for reinstating Latvia's independence. But his real name is Georgs Andrejevs. He would become a Foreign Minister under the 5th Saeima convocation.

In 1994, as news surfaced over five Saeima MPs being named in KGB agent archives, he publicly acknowledged he cooperated with the KGB, stepped down and laid down his MP mandate. 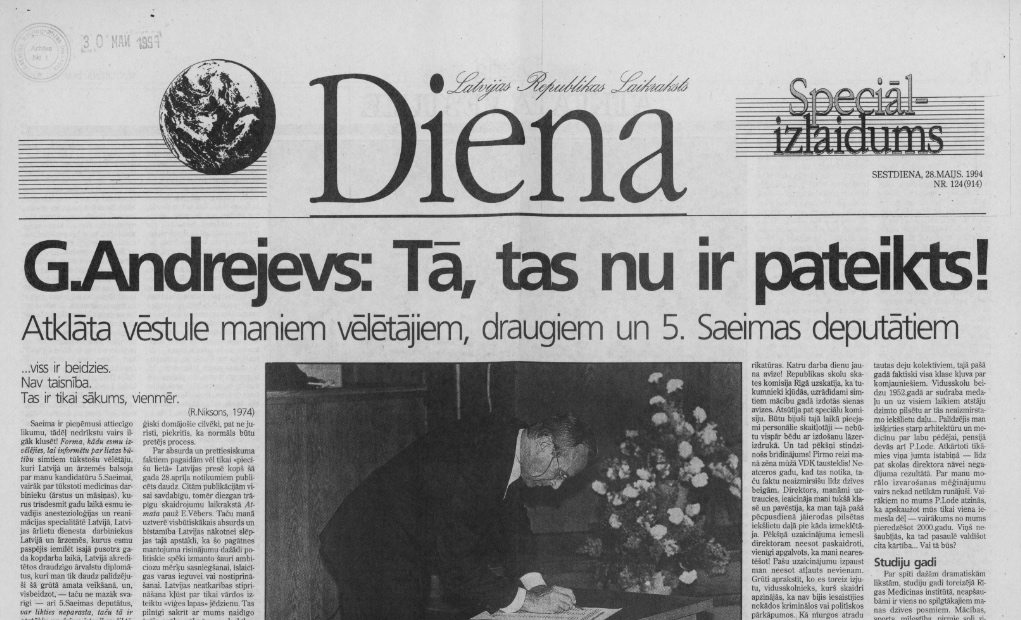 To open or not to open?

In 1991, after Latvia regained independence, former Cheka agents were banned from participating in the first Saeima election; while the ban was later lifted, the fact of cooperation with the KGB must be revealed before the election.

For all of these years, there were disputes over publishing the index cards found in the KGB headquarters. Respected president Vaira Vīķe-Freiberga refused to promulgate a lustration law twice. Later on, president Valdis Zatlers suggested to make the stash secret for the next 30 years.

While now the Saeima has voted to open the document trove to the public, there are a number of arguments for taking the information found in the KGB archives with a grain of salt.

The archives are incomplete

According to KGB data, about 23,000 agents were recruited in Latvia from 1953 to 1987. Nevertheless we only have the names of about 4,300 agents preserved in the Cheka index. For the rest there are only anonymous code names in registry journals, while the index cards with their real names are either in Russian archives or have been destroyed. Four fifths out of the early agents will not be revealed as the archives are published.

There is suggestion in the KGB archives that there were much more agents during the first years of the Soviet occupation prior to 1954. It could be accepted that cooperating with the Soviets when they were busy sweeping the forests for the heroes of the national resistance is more treacherous than what that came after.

KGB was not the only repressive structure

In addition to the KGB, there were special departments in the army, the Border Guard and the Main Intelligence Directorate. Latvia has no records on these people.

There are many ways to betray someone

Being an agent and reporting on other people was not the only way one could cooperate with KGB. The KGB had a vast network of "trusted persons", with whom the regular agents held regular contact. Their names were never recorded.

Officials could not become KGB agents

Soviet functionaries, i.e. people of high rank inside the Communist Party, the Communist Youth and Labor Unions, as well as prosecutors and court employees could not become agents of the secret service. If an agent of the KGB assumed such a position, the records about him were destroyed.

In a way, this means the higher your position inside the communist bureaucracy, the smaller the risk to become exposed as an agent of the secret service.

It is thought that a half of the KGB agents, at most, were actively reporting on their fellow citizens. The rest acted as a "reserve". That's what former agents say. If that is true, opening the trove will expose people who only accepted to but did not actually collaborate, and often under pressing conditions.

You could become an agent unwittingly

Even KGB leadership admits that someone could become a KGB agent unwittingly. We will never know whether that's true, as those from whom we can learn the truth have built entire careers upon lies.

We don't really know what these people did

Latvia has the names of some of the agents, but very little on their actual actions. The agents' personal files were relocated to Moscow or burned here in Rīga. Numerous court proceedings have ended without result, and it's clear even the government can't prove whether someone collaborated with the KGB.

The story of Astra

In January 1951, the principal addressed students of Grade 7 at the Tīnūži elementary school, asking them to join the Communist Youth. Astra, an 18-year-old, was the oldest in class and surreptitiously passed a note: "Don't do it! The Americans are coming soon." Her classmate Anatolijs did not pass the note on but gave it to the principal, who took it to he police.

The next day Astra was approached by the KGB. She was sentenced to seven years in the asbestos mines in the Urals. She returned in 1957, mentally ill. Two year later, she hung herself, at the age of 27.

Anatolijs was not part of the Cheka, a communist or even a member of the Communist Youth. He could become a Saeima MP today, if he'd want to.

But it is clear that the archives will only unearth half truths, leading to half justice.