On March 25 the Baltic countries remember the victims of the 1949 mass deportations, during which over 42,000 Latvian residents (2% of the pre-war population) were deported to labor camps, or gulags, in Siberia.

The annual commemorations feature people laying flowers and holding ceremonies of remembrance at various locations across the country – often the raiheads from which innocent civilians were summarily deported by the Soviet authorities.

With Russian atrocities – reportedly including forced deportations to Russia – now taking place in Ukraine, this year's ceremonies are likely to be even more powerful than usual.

The way in which history is repeating itself yet again was not lost on Foreign Minister Edgars Rinkēvičs and his ministry, which drew direct parallels between the brutality of past and present.

#Latvia, #Estonia #Lithuania mark sad Anniversary of deportations conducted by Soviets- tens of thousands innocent people were sent to Siberia, many perished. Modern #Russia continues crimes against humanity in #Ukraine. We, the Balts, know too well what NKVD/KGB are capable of

The address of State President Egils Levits can be watched above with English-language subtitles.

There were two main waves of deportations from the Baltic states under Soviet occupation, the first in June 1941 followed by a second in March 1949.

The deportation strategy sprang at least in part from the Soviet Union's inability to erase memories of the independent and prosperous Baltic states of the inter-war years. There was continued resistance from the national partisans, or “forest brothers”, and the deportations were supposedly targeted at supporters of continued resistance, farmers unimpressed by the Soviet system of collectivised farming and anyone suspected of being an intellectual or disloyal follower of Communism, but given the huge scale of deportations, it was not necessary to have done anything at all to become a deportee overnight.

Women and children under 16 years of age constituted 73% of the deportees.  Altogether 30,620 families and 94,799 people were deported from the three Baltic States. You can learn about the experience of five deported children and their parents through the compelling online exhibit “Be Yourself!”.

For further information about the Soviet deportations from the Baltic states and their commemoration, the Museum of the Occupation of Latvia has this helpful account. 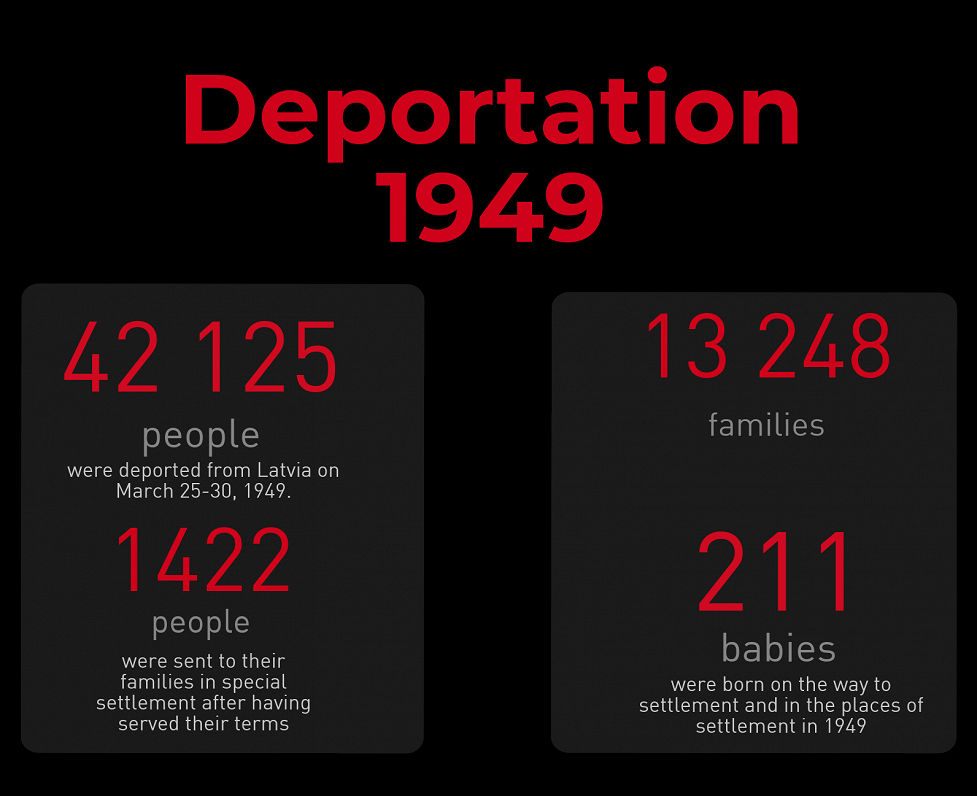 Photo: Museum of the Occupation of Latvia