A hundred years ago, on September 21, 1919 the German army general Rüdiger von der Goltz as well as self-styled prince Pavel Bermondt-Avalov, the commander of the West Russian Volunteer Army, concluded a secret pact that foresaw the transfer of German army units to the Russian army. Meanwhile Bermondt agreed to submit to the pro-German military council, or government, of Western Russia that had been set up in Berlin. This marked the start of another episode in von der Goltz's affair undertaken against the Republic of Latvia and its provisional government.

It was nothing new for German soldiers to join Russian ranks as part of von der Goltz's hybrid warfare. In the summer, just before the Battle of Cēsis, an entire German division joined the army of the Andrievs Niedra puppet government. Niedra had granted Latvian citizenship to the German major Alfred Fletcher, commander of the pro-German Baltische Landeswehr. Von der Goltz himself considered assuming Latvian citizenship. But Fletcher, Niedra and von der Goltz lost the Cēsis battle and had to look for a new front to continue their geopolitical games.

Bermondt's Russian corps, formed from Russian POWs in Germany and moved to Jelgava in the summer, served as this front. It became a sort of a sponge that absorbed many Russian volunteers going to Estonia to fight under general Nikolay Yudenich and attack Petrograd. Many German soldiers who wanted to remain in Zemgale and Courland also joined this army. A Russian volunteer would later remember (from here on out, excerpts from his memoirs are in italics):

The first thing that surprised me at the Jelgava railroad station were guards on the platform dressed in German uniforms, wearing German helmets with Russian epaulettes and Russian cap-badges. Russian flags were flying nearby. Our inquiries as to why the guards were dressed in Russian-German uniform were answered by saying these are German volunteers who want to join us in the fight against the communists. As we were crossing the town to go to the dormitory, we were surprised by the excellent clothing, discipline and pleasant look of the passing soldiers and officers. As we reached the main street, I decided to split off from the greater group and go to the corps' headquarters on my own, hoping to meet some acquaintances there. But I did not know where the headquarters were so I approached the first officer I saw wearing a Russian uniform and asked him to tell me the address. After I asked him the question, he looked at me and asked, in German, "Was?" It turned out I had stumbled upon a typical German officer wearing a Russian uniform. I went ahead, meeting more officers and soldiers in Russian uniform, and I asked them: "Sind sie deutsche Soldaten?" (Are you German soliders?) To this I got a reply, in German, "Nein, wir sind Russen." (No, we are Russians.) 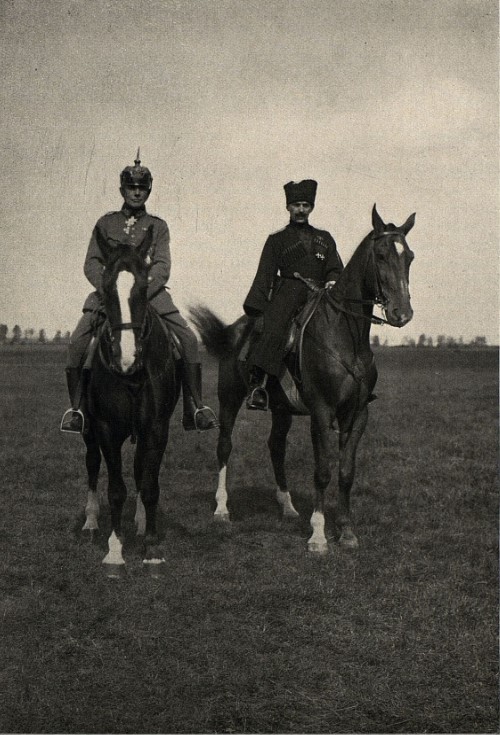 Germany agrees to give funds to Goltz's utopia

The headquarters of both Bermondt and von der Goltz were located in Jelgava. Both of them took parades and spent a lot of time together. Von der Goltz often went to Berlin to look for funding for Bermondt's army, but Bermondt in his turn pledged full loyalty. Small wonder, because his army was completely dependent on German funding. In mid-September they received a loan of 300 million marks, with a duration of 10 years and an interest rate of 5%. It should be added that, back then, German financiers appreciated the lands in Courland and Zemgale as worth 1 billion golden marks.

Germany was interested in Courland's transport infrastructure, its forest and the possibilities of colonizing the countryside with German farmers.

General von der Goltz had further-reaching plans, however. At a meeting held in Jelgava on September 11, von der Goltz said that Bermondt's mission was no more and no less than Germany's last hope. He thought that with Russian hands Germany could be saved from destruction wrought upon it by the humiliating terms of the Versailles treaty.

Preserving control over the Baltics would help Germany overcome economic problems and over-population. But it would also allow it to expel the countries of the Entente from the Baltic Sea region. Even more, a successful campaign through the Baltics would make it possible to invade Moscow and Petrograd and set up a pro-German government in Russia. This would mean taking revenge over the loss suffered in the First World War. These plans were, of course, utopian. But Germany was prepared to pay for them.

In the headquarters I was lucky to come by an old acquaintance who told me which parts [of the army] made up Bermondt's corps. He painted all of this in rosy colors and suggested I remain at this corps as there was, according to him, no better volunteer army to be found. At this moment an officer arrived at the dormitory and suggested me to join one of the regiments and write an application to the chief of the headquarters with an advance request. The unhappy, weary and hungry officers were so impressed by this offer that almost all of them said they wanted to join this corpus and stop their future journeys. The same officer told us the corps' commander had said he wanted to see us. He therefore asked us to arrive to the cavalry barracks the next day at 10 a.m. The next day we gathered at the square where almost everyone from the radiant Bermondt's headquarters had arrived. After a while a vehicle noise was heard and a light vehicle arrived in the yard of the barracks. From it sprang a man, 35 to 40 years old, with brown hair and a black mustache. He had the features of a Georgian and  wore a chokha coat, a papakha hat and a white overcoat with the epaulettes of a colonel. This was Bermondt. 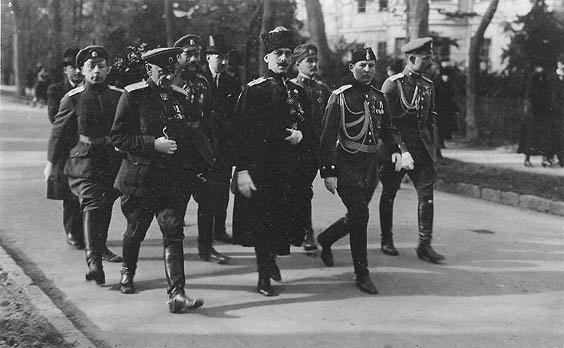 The Germans were forced to conclude the secret pact on September 21 not only by the Entente's request to recall von der Goltz from the Baltics and to finally get on with the evacuation of the German army from Courland and Zemgale, but also by the worries over the beginning peace talks between the Soviet Union and Estonia, Latvia and Lithuania. The Germans were sure that Latvia and Estonia had concluded a military union and that several Latvian and Estonian divisions would soon arrive to Courland.

In this situation, the Germans had to attack first, using Bermondt's Russian army as a cover.

On September 23 the headquarters of the sixth reserve corps said it expected an Estonian and Latvian attack on Jelgava on October 1. On September 26 Germany's Defense Minister Gustav Noske confirmed the September 21 agreement in a telegram and asked German units to report whether they would return to Germany or serve in the Russian army but assume full responsibility for this step. They were warned that if they start serving under Bermondt, their well-being and funding could come under threat. Instead of German Marks they would be paid with the currency Bermondt was printing in Jelgava.

The soldiers were spied upon perfectly. We knew perfectly well that our every word was known to counter-intelligence and our superiors. A couple of careless words and you could disappear without trace at night. A young officer joined our regiment. Someone had reported that he'd swear at the Germans. The same night he disappeared without trace. Meanwhile Bermondt himself tried to earn cheap popularity among his officers and soldiers. There wasn't a night or a party where Bermondt would be absent, missing the chance to charm the soldiers with his politeness and soulful talks of comradery. At a regiment party with Bermondt present, after we ate and drank a lot, he started dancing the Lezginka with the headquarters' captain Sh. and even shot rounds from the revolver. After a couple rounds were fired Sh. turned out to have been wounded. He was sent to the hospital with a note to the doctor that he had mistakenly inflicted this wound on himself. After that the party went on as it did before and at the end of the night, when Bermondt, drunk to the point of unfeeling, was taken to the car, the regiment commander kept all the officers and said: "If any of the officers let slip what happened tonight, he will be punished severely."

The September 21 pact and von der Goltz being recalled from Courland – which according to himself wasn't taken seriously by any of the parties – formally concluded the German occupation period in Courland and Zemgale. The formerly German-occupied territory was ostentatiously transferred to the ostentatious West Russian government ostentatiously led by Bermondt.

Of course, such a political event was an obvious affair that could continue only based on military force.

Von der Goltz thought, without justification, that the September 26 decision would provide new opportunities for successfully pursuing the joint Russian-German project as he himself would pass into the shadows, thereby reducing Allied pressure. He named several factors necessary to carry out his plans: 1) money; 2) military success; 3) improved provision; 4) obtaining several leading officers from the General Headquarters of the German army; 5) softening the Allied stance. None of these came true. 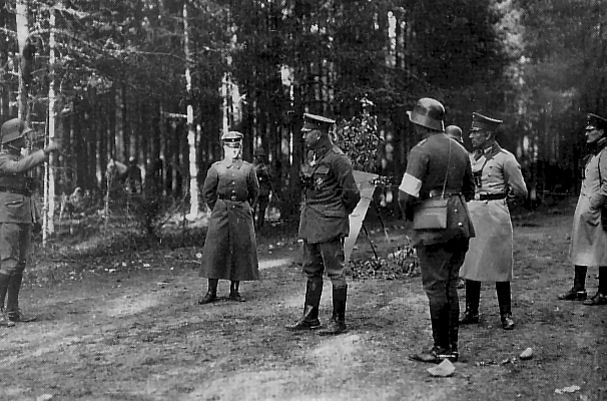 The pact between Bermondt and von der Goltz worried not only Latvia and Estonia but the Russian general Yudenich as well. He was bracing for a new attack on Petrograd and didn't want to sabotage relations with the Latvians and Estonians. On September 27 ordered Bermondt to move to the Petrograd front within ten days. Bermondt ignored this order and this would later prompt many supporters of the Whites to dub him a traitor. Bermondt's attack on Rīga started in early October, at the exact time of Yudenich's attack on Petrograd. Nevertheless a couple hundred of Bermondt's soldiers were in fact a part of the attack on Petrograd, the cradle of the Russian revolution, but only after they became prisoners of the Latvian army and were sent to the Russian Northwestern Volunteer Army.