Preserving a most beautiful part of the upper course of Daugava, the piece also proved to be a very important turning point in the ongoing National Awakening that culminated in a vote to leave the Soviet Union.

"If we were to look back at ourselves in the year 2000, are we currently not solving important energy problems with methods of the era of steam?"

This was one of the most provocative questions that Īvāns and Snips posed the readers of Literatūra un māksla (Literature and Art). It was published in autumn 1986. Preparation works for building the power plant had been ongoing since 1979, and 12 million roubles had been spent on it.

In a piece that was very outspoken for the era, the authors questioned the usefulness of the project, arguing that it would prove too costly to Latvia's economy, ecology and culture.

"Should not the matter of the economic value of the Daugavpils HPP be reviewed and re-evaluated time and time again? And instead of following a specialized institution or interested organizations, it should be reviewed on principle and on a wide and complete economic scale." 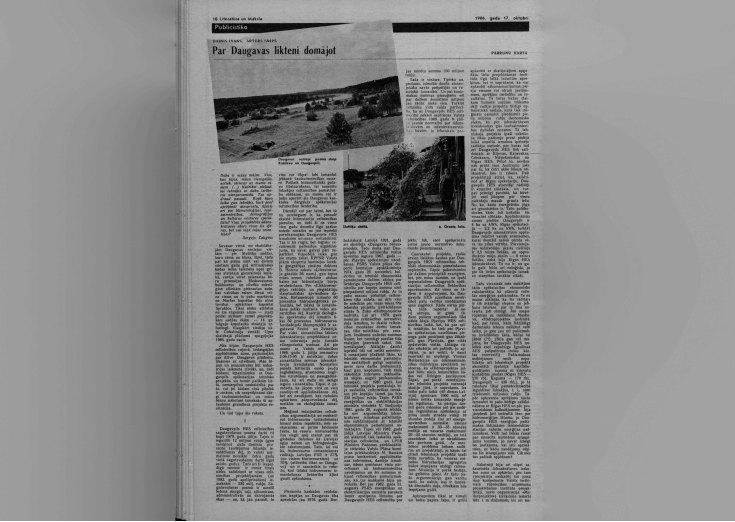 Writing the story despite appeals to the contrary

The piece was co-authored. Artūrs Snips, an engineer, analyzed the technical and economic aspects of the proposed power plant, while Dainis Īvāns, a literary critic who went on to become a successful figure in the National Awakening, considered the cultural and environmental damage.

"[..] just like you, we need a living, real Little Daugava, māmulīte [mother], melnacīte [black-eyed], our river of fate, the national pride of the republic that has been the subject of so much poetry and folk-song, which would later on, as we'd be standing by a muddy dam, all turn into fiction," the authors wrote, evoking poetic epithets for the river.

Īvāns initiated the piece. The house of his grandparents was situated near the town of Pļaviņas, and, as he admits, he felt a hurt for the nearby Staburags landmark, a legendary cliff which was sunk in 1965 when another power plant was built downstream, since he was a child. He spent the summer of 1986 in his wife's homeland, at the Slutišķu homestead in the splendid old Daugava valley, where bulldozer and excavator noises were making it clear that the days of this natural beauty were numbered.

"We saw wooden pegs on the top of some hills, and as we went around asking what the pegs were for, we were told, 'That's how high the sea of Daugavpils will rise.' We snooped around some more, and were told that a number of villages would be submerged. And I thought, it's so beautiful and our children won't get to see it. And it seemed to me that something should be done. But no one did anything. I turned to a few journalists, and they said, 'Better don't get involved. This thing can't be touched and discussed.'" said Īvāns.

But luckily, Īvāns chanced upon Artūrs Snips, an engineer of the Ķegums HPP, at the State Library. "I told him about the Daugavpils power plant, about this nonsense, and I said something should be done. Artūrs coiled his beard and said, smirking: we'll make short work of them," Īvāns said.

To collect information, the authors went to Daugavpils. As Īvāns went around collecting data at different institutions, Snips drew the information out from construction workers at the planning office. Snips said that a female colleague from Samara was very forthcoming.

"There were people from our power plants expecting a promotion, they were basically my colleagues at the power plant. But they said, you know, we won't give you any information. But a nice girl from Samara gave me information. She didn't care about the locals who said we shouldn't have the documents, she gave me everything, I copied things out, and so on," said Snips.

The piece was published on October 17, 1986 in Literature and Art, and the authors hadn't even dreamed they'd get a reaction such as this.

Public support and the "River That Can't be Named"

"We didn't really know what would follow, as I didn't know what I know now, that it was an unprecedented publication in the Soviet Union. It was the first publication across the territory controlled by Moscow arguing that a communist blitz-building is dangerous and useless

"I think that's why it had the effect it did. I think the reaction that followed warrants the piece a place among journalism world classics. Not because we supposedly wrote it so well, but the timing was perfect, and it's an unprecedented situation of a single piece turned around public thought.

"The day after publishing, my apartment suddenly turned into a resistance headquarters. They called us, they asked for us, they started inviting us everywhere. It was basically like a nuclear reaction that you can't stop anymore," said Īvāns. 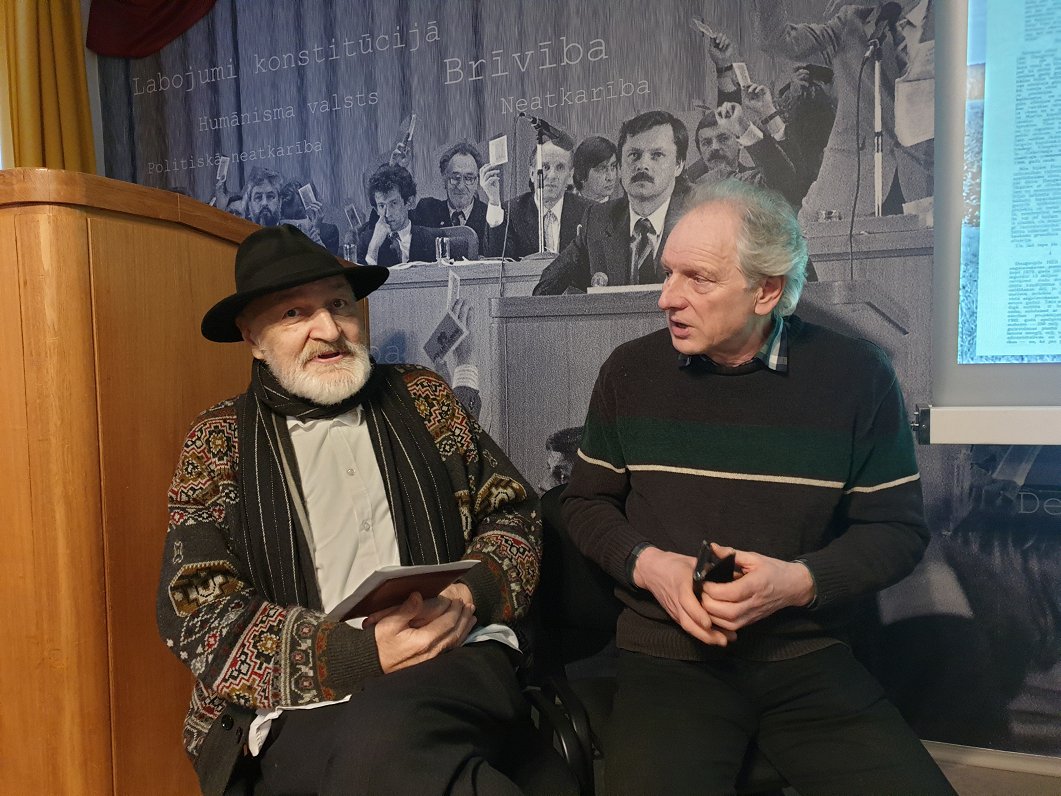 There was huge public support. Letters protesting the construction of the HPP started flowing in, and 30,000 signatures were collected shortly. Hydrologists, biologists, geographers and other professionals tuned into the discussion as well. It received international coverage and started similar processes in other countries.

Two months after publication, the state banned discussions about this. They even went as far as to ban the actual word Daugava.

"It became absurd. Factory [..] employees turned to me and said, 'You know, we had to cease producing waffles that said 'Daugava' on the packaging'" Īvāns said.

Meanwhile musicians started praising the river as never before. The Mikrofona aptauja music charts show was teeming with songs dedicated to the River of Fate, such as Mārtiņš Brauns and Vilis Plūdonis' Daugaviņa.

As public reaction snowballed, in late 1987 the authorities finally pulled the plug on the project.

It was an unique event in the history of the Soviet Union, but it's likely it was possible because the Gorbachev era had started, with the perestroika policies in place.

In the late 1950s, journalist Vera Kacena had similarly turned against building the Pļaviņas HPP which sank the aforementioned Staburags cliffs. Her article likewise sparked a great reaction, but to no avail – the plant was built and the journalist banned from being published for life.

A magazine that turned against the system

The aforementioned piece was also published in Literature and Art, and it was no coincidence. Even across the deepest stagnation, the magazine was very free-thinking, while starting with the 1980s its daring became ever larger. This was expressed very clearly in discussions about current events, which the magazine published in continuations. These pieces examined the place of an individual in the society of the era, as well as environment issues, not shying away from pointing out any problems.

"We wrote about things that were rotten, which stank in the system. About things where it was clear that the managers said one thing but in reality did something completely different. This is what started that there's something faulty within this system," said Jānis Škapars, long-time editor-in-chief at Literature and Art. 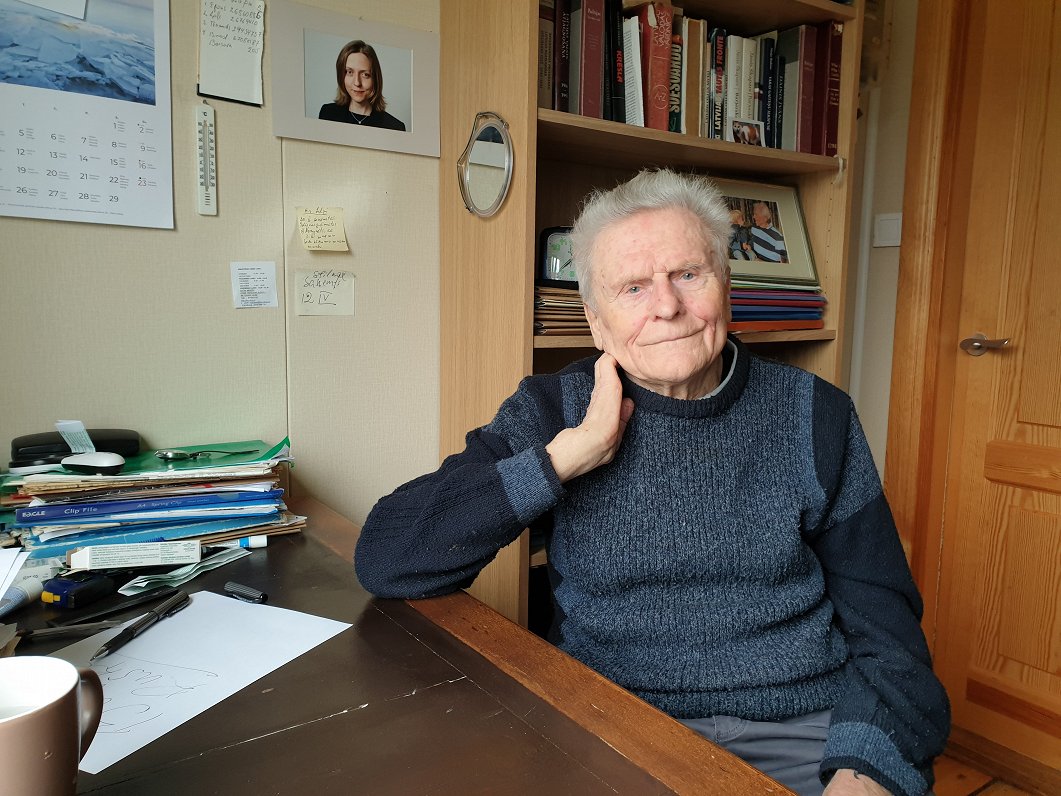 Starting the 1980s, Škapars' activities were observed through a magnifying glass, and he was dismissed after the 1985 discussion about the Song and Dance Festival. The discussion had been overly critical of the proletarian internationalist atmosphere of the celebration.

Even though Škapars was no longer at the magazine when it ran the piece by Īvāns and Snips, Škapars and his team had prepared the soil for their work. Now Škapars thinks that the publication, though very valuable, did not single-handedly start the National Awakening.

"When their piece appeared, the atmosphere was conducive for writing. When we were working, we were attacked from all sides as if by cultures. But Īvāns and Snips did a great job, as the article has fundamental value for the twists and turns of the Awakening, its crest.

"It has huge significance, but I think one shouldn't overreact, as one article didn't start the National Awakening. It was a process, a big, difficult and hurtful process for the Latvian nation," he said.