Liepāja in 1919: how the townsfolk brought down a German monument

june 27, 2019, 9:35
History
Authors: Liba Mellere (LR4 un Rus.lsm.lv autore Liepājā)
The steamer “Saratov”, on which the Latvian Provisional Government led by Kārlis Ulmanis spent two months floating on the waters near Liepāja, returned to the Liepāja harbor on June 27, 1919. This was the end of a period called the “Republic on Water”. LSM's Russian service joined historian Juris Raķis in taking a stroll around Liepāja to see where some of the significant events in Latvian history took place.

—Firstly, it is important to delineate the military political situation of the time. There aren't that many German soldiers in Liepāja on the last dates of June 1919 because of the battles happening near Cēsis, where most of the regiment was sent – Juris said. There was a small garrison, one of the barracks was located on Dārza iela (photo 19 – taken, like all others, unless noted otherwise, by Liba Mellere), though when there were more soldiers in Liepāja, they resided primarily in the harbor barracks.

The headquarters of General von der Goltz were located in the current building of the Liepāja Museum (photo 25).

There are several theories about which room served as the general's study. LSM's Russian service has heard that von der Goltz worked in one of the rooms on the first floor (photo 26), or on the second floor, which now houses an exhibition dealing with the Provisional Government. Juris Raķis, however, has another hypothesis.

“God knows is the study was that room on the first floor – it's a veranda after all. I'm inclined to believe that the general used the hall on the first floor (photo 27). The chief needs a solid study, and here there's some place for the adjutant's room as well as all those entrances and exits. But his private chambers were, it's very likely, on the second floor,” said Juris.

Let's return to June 1919. There are still a few boys from the volunteer corps left in Liepāja. Some ill-tempered captain took cutthroats into his regiment, who had nothing to do after the fall of the German Empire, and headed hither. Incidentally, one of the volunteers in the corps was Martin Bormann, the next head of the Nazi Party Chancellery , Nazi Party official, and Hitler's private secretary. At the time, he was still a youth, born in 1900. There were other German volunteer units comprised of local barons. After all, the April putsch was mounted not by regular German units, but by such volunteer Baltic Germans under the command of Baron Hans von Manteuffel-Szoege and the unofficial supervision of von der Doltz.

The Germans were crushed near Cēsis. And on June 22, the Allies (their troops are not there, only observers and advisers) decide that the time has come for German units to go home. They are ordered to leave Liepāja. There are no more germans left in the city, and only about a hundred in Karosta (the harbor vicinity of Liepāja).

What's more, there are now Scotsmen marching through Karosta, delighting locals with their kilts.

The Germans leave Liepāja, but they don't go that far – they settle in Priekule, Cīrava, Ziemupe, that is, in the surrounding farmsteads belonging to barons. Von der Goltz goes to Jelgava under the pretext of supervising the leaving troops. But he has already managed to compromise himself by sitting down to a cup of coffee with Pavel Bermondt-Avalov, who was “written out” from East Prussia, and started negotiating with him (photo 28, from the Liepāja Museum fund). But this would happen later, in the autumn of 1919. 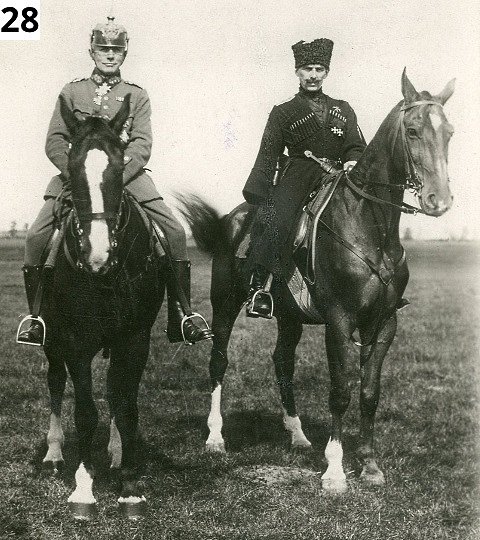 After the Cēsis battles, the Libava Volunteer Riflemen Unit arrives in Cēsis. The unit consists of more than 800 soldiers. Their commander, Prince Anatol von Lieven, is lying wounded in a hospital in Rīga, but is preparing to come to Liepāja. The unit is led by Janovič–Kaneps who happens to be an Anglophile. Allies look askance at the Livs – they are, after all, wearing a German uniform, but with Russian epaulets. England offers ships, ammunition, and horses to Livs, and tell them to go and fight the Bolsheviks in Petrograd. Janovič–Kaneps agrees. All of this is happening before the return of “Saratov”.

The officers are disappointed with Kanep's decision. Firstly, he was preparing to send away the Livonian “golden fund” from Liepāja, secondly, they were seated in some passenger steamer, but where should the horses go? Several officers resigned and leftr for Germany. Many others, however, joined the Latvian Army. Only afterwards did the Allies agree that both the horses and the ammunition will be sent by the cargo ship. That's how the situation created a schism between Livs. The matter was also complicated by the arrival of General Oskars Dankers' unit from North Vidzeme, and Dankers also believed that the Livs had no place in Liepāja. In the meantime, Janovič–Kaneps is appointed as the head of the Liepāja garrison.

The political situation is quite tricky – the government exists, the public trusts it, and is waiting for it to land on the shore. And the newspapers are already hailing the victory – the German soldiers have gone.

But murmurs are circulating round the city – with the Germans routed, why do we need a monument in their honor? The Germans had a habit of erecting a monument in places they conquered as a way of honoring their victory. Such a monument appeared in Liepāja in 1915 across the street from Kurmāja, at the end of Kurmājas prospekts. About here – Juris pointed (photo 29). A tram would pass here, take turn and rode onwards (photo 30, from Vladimirs Mickevičs' collections, the mentioned spot is a few meters further on)There was a flower bed here and in the middle a monument in the shape of a pyramid. It had an imperial eagle on the top, and on the sides, bas-reliefs with generals who led the heroic German troops during the occupation of Liepāja. 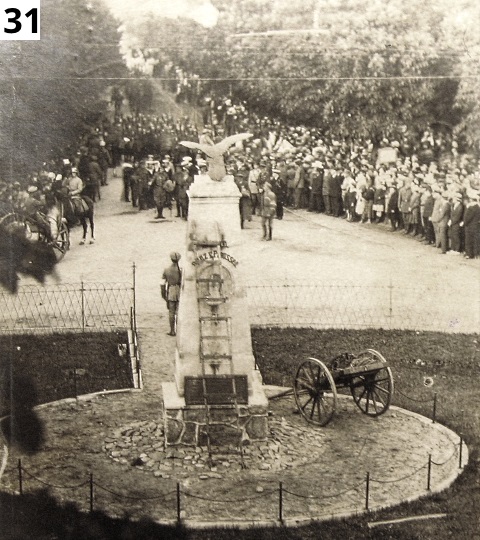 With the approach of June 26, the residents of Liepāja are burning with the desire to topple the monument (photo 31, from Juris Raķis' collection).

Some with crowbars, some with hoes, and someone else has brought wheels and a bag with which to cover the monument. They are wrenching it from the ground, but taking care not to break it – for it could come of use later. They prize off the eagle, break the bas-reliefs. As always, some people are doing all the work, while others are standing further away, watching and applauding. Livs are closing in on the scene. Janovičs-Kaņeps had issued an order that everything be done politely. And so the Livs are regulating the crowd, dividing it into two halves to allow everyone to enjoy the spectacle. But everyone was privately disappointed with these proceedings: Prince Lieven had in fact declared not to interfere in Latvian internal affairs. But the removal of the monument is just such an internal affair. Towards the end, a small Latvian subunit advanced with the Latvian flag, to endow the act with meaning. In a word, the monument was destroyed in some two hours. But not into pieces – those sam bas-reliefs were meant to be preserved in the Liepāja Museum. They were there during the First Republic, at any rate.

And on the same day, General Hubert Gough, Chief of the Allied Military Mission to the Baltic, arrived in Liepāja from Tallinn, and was met with a warm welcome from the townspeople.