may 24, 2019, 16:24
History
Authors: Jānis Šiliņš (Historian)
After the joint forces of Baltic Germans, Latvians and the Russian White Army freed Rīga from the communist rule on May 22, 1919, many Bolshevik supporters were shot. It is not clear how many exactly, and different sources give different estimates, starting from the 1924 estimate of 174 by the head of Rīga's Gendarmerie to 4,000–5,000 people as attested to by the social democrats and communists. Mass executions in Rīga only stopped in June 1919 after Allied intervention.

In all, about 3,000 POWs fell into the hands of the Landeswehr and the Iron Division. It is possible a couple hundred of them were shot. For example, there's an American film reel that depicts the execution of war prisoners in Jelgava on May 26, 1919.

But not all of the POWs met such a degrading ending. There were about 2,500 prisoners in Rīga's detention facilities, and most of them were freed after having two other people vouch for them. Many of those freed would later join the Latvian brigade under Colonel Jānis Balodis. 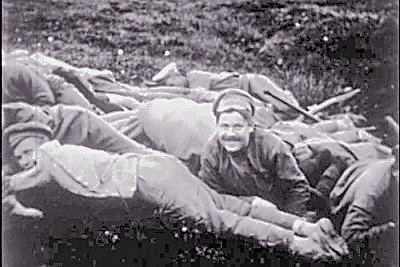 (The footage recorded by Lieutenant Frank Johnson is said to have been one of the most sensational things ever shot on film back in the day and we strongly recommend reading the remarkable account of how it was filmed and the impact it had at the Hoover Institution website.)

A few days after Rīga was taken, more than 200 Red Army soldiers, communist and police who had been killed in the clashes were taken to the Matīsa cemetery. On the outskirts of Rīga, corpses were lying on the streets for prolonged periods of time and turned up on the bank of River Daugava or else were floating in the Rīga canal. It can be reasonably assumed most of them were killed in the fighting, as the communist units hastily drawn up by the Reds suffered heavy casualties. But it is likewise true that among the people who were killed before war tribunals were set up there were some who had been killed without trial – victims of robberies, denunciation, or simply the whims of the soldiers.

Soldiers of the Iron Division were outstandingly cruel in this regard, as even the Andrievs Niedra puppet government complained about their lack of discipline.

After Rīga was taken, it was divided into sectors with every unit assigned its own turf. The Iron Division oversaw the neighborhoods of Torņakalns and the Maskavas Forštate, the Landeswehr oversaw the rest of the left bank besides Torņakalns, while Jānis Balodis' brigade watched over the city's eastern part starting from Elizabetes street.

Soon after the armies entered Rīga, buildings were searched and arrests were made en masse.

About twenty people were killed in the sector overseen by Balodis' brigade, but that is not nearly as many as in the sectors overseen by the Iron Division and the Landeswehr. It was partly because the bourgeoisie and Baltic Germans had been driven away from Old Rīga in late March and therefore most of the people living in the Old Town and central Rīga could be accused of collaborating with the communists. They now faced the wrath of the Baltic German soldiers who had lost many of their relatives during the communist reign.

How many were killed?

A few days after Rīga was freed, impromptu war tribunals were set up to review the cases of the arrestees. But it was not real court action, as often people were tried based on suspicions or unverified testimonies. After protests by Colonel Balodis and the Latvian citizenry, the courts were reorganized to have Latvian officers in them. But on June 9 executions were stopped after protests by representatives of the British and American missions on site.

The archives have documents testifying to 178 people tried and killed in war tribunals. But it is clear that these lists are not full. Alfred Fletcher, the head of the Landeswehr, reported to the British mission that 4,000 people had been captured and 200 killed by June 7. The French mission later estimated that 3,000 people were arrested and 500 killed.

However, it can be assumed that about 700 people were killed (450 executed after trial and 250 with no trial). The most massive execution of those that were documented took place on June 5. That day, 56 people were killed in Rīga's Central Prison.