The Jews of Valdemārpils – killed and then forgotten

In the final years of the interwar period, about 100,000 Jews lived in Latvia, making up 5% of the state population. About 70,000 – or 90% of those still residing in the country when the war erupted – were killed in the holocaust. Part of them managed to flee to the USSR.

Many Jews lived in Rīga and the historical regions where they had lived for a long time. 20,000 out of 28,000 Latgalian Jews were killed; and 6,000 out of 7,500 in Kurzeme. In tiny towns where there were a couple hundred or dozen Jews, they were slaughtered within the first weeks of the Nazi occupation in summer 1941. One of these was Valdemārpils near Talsi, western Latvia. In July 1941, 150 Jews lived there. In August, none.

The small town was renamed in 1926 after Krišjānis Valdemārs, a cultural luminary and star of the Latvian National Awakening. As a young man, Valdemārs worked in what was then named Sasmaka town as a private teacher to save up money to study in St. Petersburg. His pupils were mostly Jewish children, as more than 80% of the locals were of Hebrew origin in the mid-19th century. After the First World War, this proportion changed to 15% but they nevertheless lived in harmony with the locals, with Jewish and Latvian children studying side by side. The only curricular difference: Jewish children studied the Torah in a separate class.

Antisemitic ideas first arrived in Valdemārpils in the mid-30s.

During the authoritarian Ulmanis regime, under the ironic auspices of "strengthening national unity", Jewish doctors were laid off without prior warning. The Talsu novads newspaper resumed shamelessly that "Jews are becoming a dying nation". Local antisemitism and talk about a global Jewish conspiracy was abetted by the economic crisis, which affected Jews less than it did Latvians, as the latter were mostly engaged in agriculture.

Hebrews, on the other hand, were mostly either craftsmen or traders. This was due to historical reasons. While they were a local minority in the last years of the free Latvian state, Jewish people dominated the economy of Valdemārpils. They owned the sole drugstore and bicycle shop; four out of six abbatoirs; the sole glass shop; and all four tin workshops. In addition, the sole public sauna was owned by Jews, and water pipes were installed only in a single town house.

Jewish people suffered more during the 1940 Soviet occupation, as they had more things to steal.

Of all the seized town houses, more than half had belonged to Jews. Communism did not bring any good news to the Hebrew population in Valdemārpils. Only five Jews, who partook in the Young Communist League, could be considered collaborators, which were in fact lead by the local communist youth leader J. Zālītis.

In June 1941 – even before the Nazi occupation came – local communist leaders fled. This resulted in a short-lived power vacuum.

Locals of the former Aizsargi militia took over local government buildings and companies and established a self-proclaimed military police unit (pašaizsargi). J. Zikmanis, a former member of the inter-war militia, became its commander. They shot several communists and communist youth members without trial. A local government board was established, with the town being overseen by R. Bērziņš, Valdermārpils' head of board prior to the war. The red-white-red flag was flown high on the mast of the local government building, supposedly reinstating the independence of Valdemārpils. 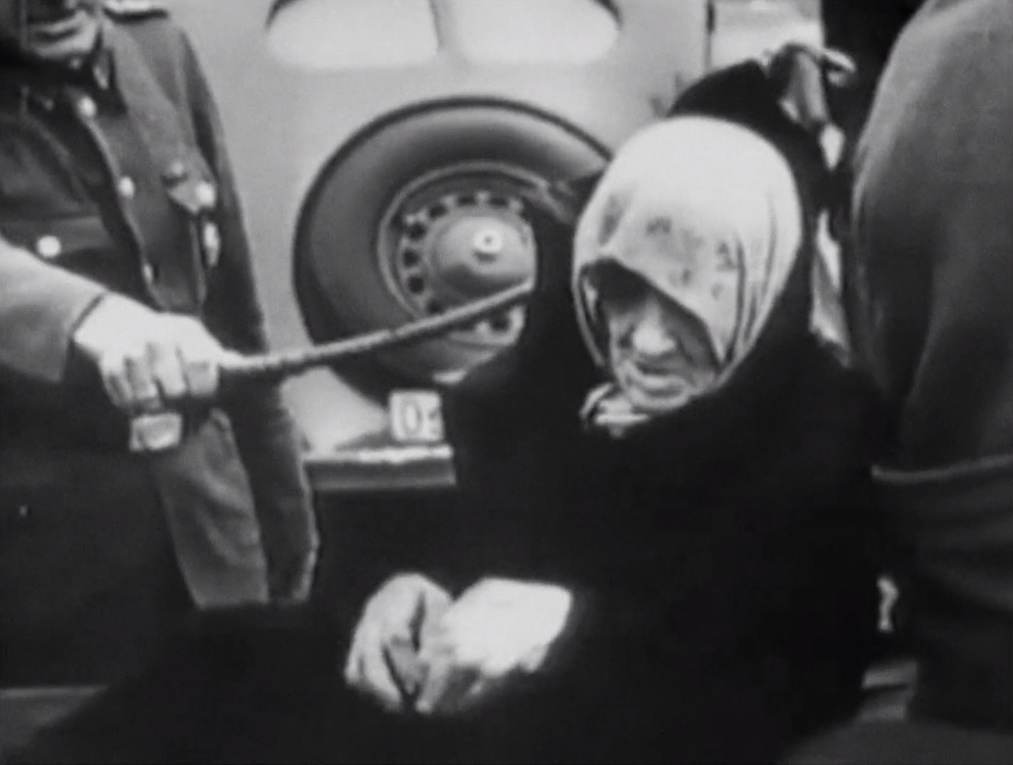 Alas, celebrations were not to last. A week later, German officers arrived and ordered the removal of the flags. Army headquarters were set up at the local primary school, which was liquidated. As it turned out later, it was the last academic year for 23 Jewish pupils. The first orders of the commandant's office soon followed: all Jews should wear yellow badges; they are not allowed to take all but any office; shops must close, and Jews can only sell to Jews; and contacts with Christians are banned.

Did protest ensue from the local Christians? It did not. The Bērziņš' government made a list of the local Jews, of whom 56 were singled out as able to work and ordered to arrive at the local government building. Zikmanis' troops soon lead them to the barn of E. Grauss, a local official, and then put to work at the peat bog outside the town. These people, judged to be "fit to work" included eleven-year-old Hena Verbelova.

A week later the German office left Valdemārpils and entrusted its further orders to the local Latvian government, the aforementioned local board and former aizsargi. This had been the Germans' plan all along: to make the locals do the first, most dirty deeds they want carried out.

A secret communique by the Reich said that anti-communist and anti-Jewish initiatives in newly conquered territories should be encouraged, leaving no testimony or chance to later refer to orders or political promises the occupying Germans had given.

The press was aflutter with propaganda against the Jewish communists, which were turned into synonyms. The aggressors turned the ire of the people from themselves against an "enemy within".

The plan cut like a hot knife through butter. After a few days, in mid-July, a new order came from the Talsi municipal board: "Over registering Jewish property". It was signed by the highest local official V. Kārkliņš and his secretary E. Puriņš. Jewish properties were seized, allowing them to keep only the basic necessities for surviving two weeks. It was the same thing the communists did: a committee arrived at your home, sidelining people into the corner and taking away their property. Even the justification was the same: "Luxury wares and valuables, which have been obtained through unfair trade and fraud, is being confiscated."

Suffice it to say that this was carried out by the locals. They were paid from the money taken from the Jews. The plunder was stored... in the local synagogue. Three days later, a new municipal notice came. This one ordered to collect Jews in one place and watch them. There were about 70 Jewish people left in the town, who were unable to work – old people, children and sick people. They were all taken into two houses owned by the Jews on Cunces Street, and a few other surrounding ones. It was just across the street from the local government building, and a few houses away from where Krišjānis Valdemārs lived. Again, the former local aizsargi stood guard against the Jews. On July 25, the local militia of Talsi arrived, lead by lieutenant colonel A. Vēveris. They resided at the Rīga hotel on Lielā Street. They drank a lot.

"The lubricant of the team's life was alcohol. It was consumed before, during and after the killings," wrote historian Andrievs Ezergailis.

Antisemitism wasn't their main motive. Mere greed drove them, as the task was handsomely remunerated. Then there was misguided patriotism, and then there was what would today be called toxic masculinity, which made former soldiers, sportsmen and corporation members become executioners. "They were intoxicated by having power over life and death."

They stopped drinking at about midnight. They loaded all the Jews who couldn't work into trucks and then took them to a meadow on the way to Kaltene outside the town. There, they killed and buried them.

People from the nearby houses had heard shots, screams and cries of children until six a.m.

The head of the local board, Bērziņš, could not bear the guilt and resigned. It proves that participating in mass murders was not compulsory. It did not stop the slaughter, however. Bērziņš' deputy Grauss took over and on August 7 the former aizsargi killed the remaining 56 Jews by the peat bog they were forced to work. The four centuries of Jewish settlement in Valdemārpils were eradicated within two nights. Ten days later, the executioners held a celebration in honor of driving the communists away from the town.

Historians say that the Jews' property was appropriated, as only 10% of the Jews appear on the confiscation lists. Three days after the massacre the leaders of the poor township raised their own wages significantly. In the fall, they made unusually high welfare payments. And they hired dozens of ware sorters that worked at the synagogue for months. The valuables were sold in auctions for pennies.

It can be presumed that many a Latvian children were able to go to school in a coat their murdered classmates had worn before.

Not a single name of a German aggressor crops up in the harrowing story of Valdemārpils. All of this was perpetrated by the locals.

Local and municipal boards, and militia, were established voluntarily. There's no doubt that they fulfilled the orders of highers-up in the Nazi command when they killed these people. But the offices could be taken voluntarily. One had the choice to step down, to refuse. Killing, as well as seizing and sorting property were remunerated jobs. Valdemārpils was not an exception. The real exception was the Latvians who helped save the Jews. There were a couple hundred of such Latvians, and only about four hundred of the Jews were saved.

Plaques were recently set up on both sites of the massacres, but there is little to learn about this part of history on the website of Valdemārpils, or its Wikipedia website. These list notable memorial sites, the ones dedicated to Soviet deportations and the 1905 revolution, but there's no mention of the graves of about 150 Jews who were slaughtered here.

It is suggestive of collective amnesia, described in depth by historians researching Nazi crimes. Krišjānis Valdemārs once published a piece in the Baltijas Vēstnesis newspaper, titled "A few words about Jews in the Baltics."

He condemned the antisemitism that was rampant in the Russian Empire, and urged Latvians to take Jews as an example of how to make money. He asked for a common fight for the rights of small nations and not to allow to hate gain the upper hand, as both would emerge the losers in that case.

These were prophetic words. The Jews lost their lives to bestial hate. The Latvians lost their memory.